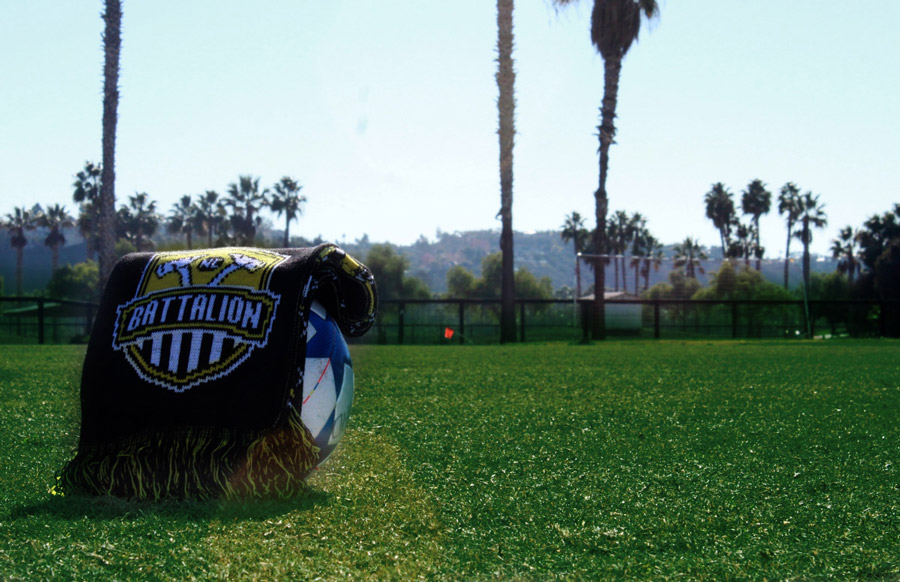 The North County Battalion are on the road this weekend, heading 550 miles north to Santa Rosa, where they will take on the Sonoma County Sol in the second round of the National Premier Soccer League Playoffs. The Battalion are coming off one of the most enthralling matches in recent San Diego soccer history, a 5-3 win over Deportivo Coras of Riverside in the opening round of the postseason.

“That’s why we love this game,” Battalion Head Coach Ryan Guy said of his team’s last match, which saw them come back from 2-0 down and score four second half goals en route to the victory. “We lived it. We soaked it up. Now it’s time to move on to the next test.”

That test is not an easy one. In addition to the 1100+ mile roundtrip, the opponent waiting in Santa Rosa is a powerful one, both in the present tense and historically. It’s the first place side in the Golden Gate Conference and a club that has a national championship to its name.

The Sonoma County Sol have always been a force to be reckoned with, since their inception back in 2004. Their shining moment came in 2009, when they lifted the national championship trophy after a 2-1 victory over the Erie Admirals.

While past triumphs can help to inspire a new generation of players, past failures can do the same. Last season, the Sol were knocked out in the first round of the NPSL playoffs by CD Aguiluchos USA, a match that went to penalties, twelve rounds to be precise, with former Sol standout Ross Middlemiss scoring the winner in the shootout for Augiluchos.

“That taste from last year has definitely stayed with us,” said Sol Head Coach Vinnie Cortezzo. “It has kept us hungry. But we still have some of the veterans who were part of that ’09 team, and that fuels the fire as well. These young guys want to feel what that’s like to go all the way.”

Last Saturday, the Sol looked bound for another first round playoff exit, trailing 1-0 at the half to East Bay Stompers, a side they had not beaten in three regular season matches. In all three prior contests (two losses and one draw), the Sol had the lead at halftime, which made for an inspiring, yet almost humorous team talk in the dressing room before the second half.

“We had the lead against those guys three times this season, and never won,” Cortezzo said following the game. “I told the guys at the half, look, maybe we’ve got them right where we want them. There were no real tactical adjustments. No maneuvering things to defend a lead. It was just go out there and throw everything we’ve got at them. It worked out well for us.”

The Sol came out on fire, scoring the equalizer in the opening minutes after the restart, and drawing a penalty before the hour mark. That penalty was slotted home by one of the most experience men on the roster, Taylor Varnadore.

“Taylor’s been huge for us this season,” bragged Cortezzo. “He’s part of that veteran presence. He’s played multiple positions. He’s a true leader. And he wants to be that guy, the guy who takes the kick when the pressure is on.”

The Sol added a third goal late on, ending the match with a 3-1 scoreline, and finally doing away with the pesky Stompers.

“It was an amazing night,” Cortezzo enthusiastically said. “Then I watched the highlights of that Battalion match. Wow! I guess one thing’s for certain; both of these teams don’t mind coming from behind to win.”

It will be interesting to see how the teams match up on Saturday night in Santa Rosa. The Sol are a possession first team, a side that wants to play attractive, flowing football. The Battalion have developed a reputation around Southern California and beyond of a team that will simply score more than you. While it’s not a reputation that Ryan Guy necessarily wants to hang his hat on (Guy speaking for months about improving the Battalion defense, which they had definitely done in the latter portion of the regular season), there are far worse things for a team to be known as in the soccer world.

But apart from highlight reels and reputations, there’s not a whole lot for either side to assess going into this match. Players and coaches alike are descending into the depths of the unknown in a game like this one, and that’s not necessarily a bad thing. Ryan Guy said it best.

“As a coach, I’d prefer to battle a known enemy, but there’s an almost inexplicable excitement that comes with the unknown opponent.”

“We know we’re up against a high quality opponent that can score goals with the best of them, but that’s about all we know, and that forces us to focus on ourselves and nothing else. We’re not thinking about games or certain plays from past encounters. We’ve never played them before. That’s part of what makes this Saturday so intriguing.”

Cortezzo also shared his opinions on the NPSL playoff format, which sees the Battalion, a team with a higher points per game average (the stat by which the league seeds the teams in the regional playoffs) having to travel north to Sonoma as opposed to the other way around, being that the Sol were the regular season champions of the Golden Gate Conference.

“Winning your conference should mean something. It has to, otherwise what’s the point of the conferences? We had to fight with everything to pull this off, and this is definitely our reward for that fight.”

Not only did they have to put up a monumental fight to win the conference, the Sol had to battle with every ounce just to make the playoffs in a highly competitive conference that was filled with more parity than ever before. The Sol had to win four of their last five matches just to assure a playoff berth, and had to win their final two games to clinch the conference. They are riding a six match unbeaten run going into Saturday, with five of those being wins. The Battalion are no slouch in that regard, having not lost since May 1st.

It’s two teams both riding waves of momentum into this playoff affair. Which way will the wave break? Will the glory fall to the home side in wine country, anxious to replicate the triumphs of their illustrious past? Or will the San Diego boys, in their inaugural season as a club, stake their claim of intent to the entire state of California, and beyond?

If the Battalion were to win on Saturday, there is a chance they would host the West Region Final on July 23rd. If they beat the Sol, that subsequent match on the 23rd will definitely take place in San Diego, but it could still be an away day. Albion Pros host Seattle’s OSA FC this Saturday, possessing home field advantage through the regional culmination. If Albion and the Battalion were to both win, the two sides would meet in a mouth-watering, all-San Diego tie at Mission Bay to determine who goes on to the national semi-finals.

(Can’t make the game? Watch it LIVE! Join Nate Abaurrea from Santa Rosa at 7:30 PM this Saturday, July 16th, as the North County Battalion take on the Sonoma County Sol in the 2nd round of the NPSL Playoffs.)