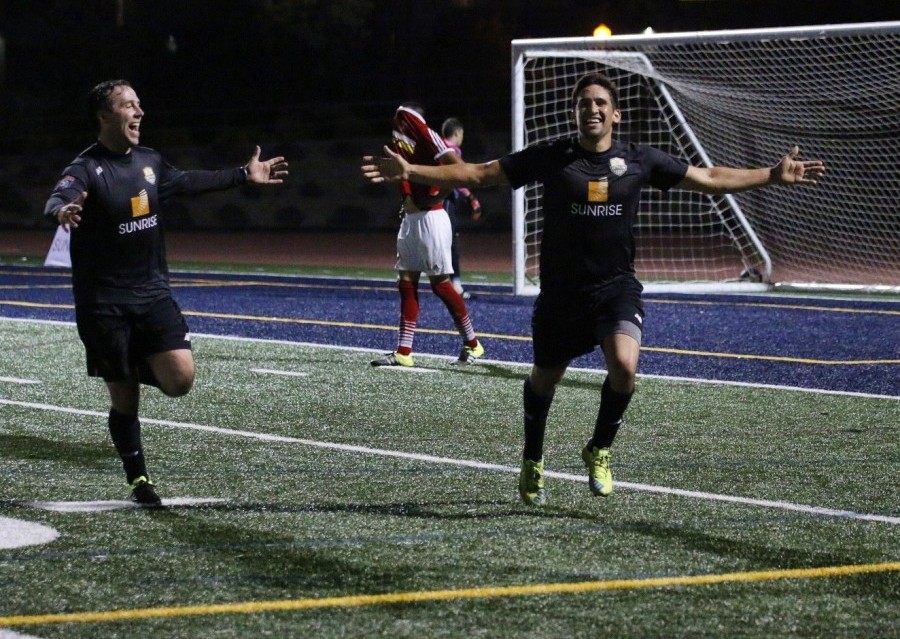 What a team. What a time.

San Diego’s North County Battalion are on their way to Northern California. They are due to take on the Sonoma County Sol in a second round NPSL playoff match this coming Saturday, July 16th, at 7:30 PM. As travel plans are being made for the long trip, and a tactical approach is prepared for the weekend ahead, Battalion supporters are still floating on a cloud, slowly descending back to earth after one of the most enthralling nights of soccer in recent San Diego history.

After two 1-1 draws during the regular season between the Battalion and Deportivo Coras USA of Riverside, (the latter being the final match of the regular season which saw the Battalion pick up a crucial point at home and solidify home field for the first round of the NPSL playoffs) the two sides met again at Del Norte Stadium on Saturday night, and the third contest between the sides did not exactly fit the mold of the season series.

The Battalion defeated Coras 5-3 in front of a raucous and fun-loving crowd, a party like atmosphere in full effect for the club’s first ever playoff game in their inaugural season. However, that crowd was rather nervous before the sun went down, Coras striking in the 8th minute through left-back Cody Shelton. On a free-kick just outside the box, Shelton got on the end of a floated service to the far post and headed home past Battalion goalkeeper James Stroud, virtually unmarked as his cranium met the ball.

It went from bad to worse in the 31st minute, Coras doubling their advantage through Edgar Llamas, a scrappy goal that counted just the same. It was all Coras in the first half, the Battalion on the back foot and looking destined for defeat. Cody Shelton almost made it 3-0 just moments later, hitting the crossbar on an audacious “tres dedos” attempt with the outside of his right foot on a free-kick that was literally inches outside the eighteen yard box. Had that gone in, it surely would have been curtains for the NCB.

In first half stoppage time, the Battalion looked to one of their most experienced players to get them back into the contest. Nelson Pizarro, a consummate professional just one day past his 31st birthday, found himself with the ball at his feet just inside the Coras half, the Battalion with numbers if they pressed. They did so, and in turn, more space opened up for Pizarro. The Coras defenders covered the passing lanes, and dared Pizarro to shoot. He did, and from over 25 yards out he sent a bending beauty over the outstretched arms of Coras keeper Alonso Lara and into the back of the net. The deficit was cut in half, and momentum was suddenly on the side of the home team as the half time whistle blew.

As the two sides returned from the dressing rooms, the physicality increased. It boiled over in the 53rd minute, and Coras paid a major price.

With Battalion defender Sasha Peranteau on the ball in his own half, Coras striker Bruno Meyer was darting straight for him. Peranteau got rid of the ball, and Meyer came flying in, studs up, right into Peranteau’s left ankle. A straight red card was the result of the challenge, and it left Coras with quite the task, defending their 2-1 lead for at least 37 more minutes while down a man. Paranteau rose to his feet after receiving treatment. He was good to go. The Battalion knew that it was time to launch.

In the 62nd minute, Tim Roty scored his first goal for the Battalion, the veteran midfielder getting on the end of some brilliant build up play complete with a couple of first-time back-heel passes (the latter from Nelson Pizarro, which sent Roty through on goal), before slotting one past Lara to level the score. Twelve minutes later, a familiar face popped up with one of the goals of the season. Cutting back onto his right foot from the left channel, Esteban Reyes teed one up and let it fly from long range. Lara never stood a chance, Reyes’ blast was still moving upward as it rippled the net. The crowd went wild, as a few Coras players sunk to their backs and knees. 3-2 NCB. Cruise control time. 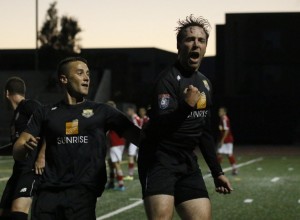 Unfortunately for the Battalion, nobody alerted second half Coras substitute Ramon Nunez that it was time for his team to roll over. Nunez had other ideas, and with one blistering half volley on a swift counter-attack, Nunez beat Stroud to tie the score. 3-3. Ten minutes plus added time to go. It was a neutral’s delight, a nerve-wracking experience for anybody with a vested interest. The game needed a winner.

In the 89th minute, the Battalion were quite literally handed a massive opportunity. A hand-ball in the box saw Justin Picou step up to the spot against Coras for the second time in ten days. After scoring the penalty that solidified home field for this first round playoff affair back on June 29th, Picou sent the Battalion onto the next round from the very same spot, twelve yards from goal. He did it in some style as well, sending Gabriel Esqueda (who had replaced an injured Lara just ten minutes prior) diving to his left as the ball floated straight down the middle and under the crossbar, Picou perhaps saying that the “Panenka” should be renamed in his honor.

Nelson Pizarro scored the fifth deep into added time, an insurance goal that was greeted with utter jubilation. It was also a goal that sealed the fate of Coras, and cemented Pizarro as man of the match.

There was just one piece of business left, and that was scoreboard watching (or “Twitter watching” to be more accurate). If So Cal SC were able to pull off the upset against Albion Pros in Pacific Beach, the Battalion would have hosted a second round playoff match. Instead, Albion survived by the hair on their chins, ending 120 minutes tied 1-1 and down to 9 players. Jean Antoine made three saves in the subsequent penalty shootout to keep the 1-seed alive in the postseason.

So here it is, the second round of the NPSL playoffs. The West Region is down to four teams, with Albion hosting OSA FC of Seattle, Washington and the Battalion taking on the Sonoma County Sol, the 2009 NPSL National Champions. If both San Diego sides were to win, they would meet in the West Region Final on July 23rd. The stage is set. Let’s see what’s in store.

Stay tuned to Soccer Nation for all the build up to this weekend’s NPSL playoff action.