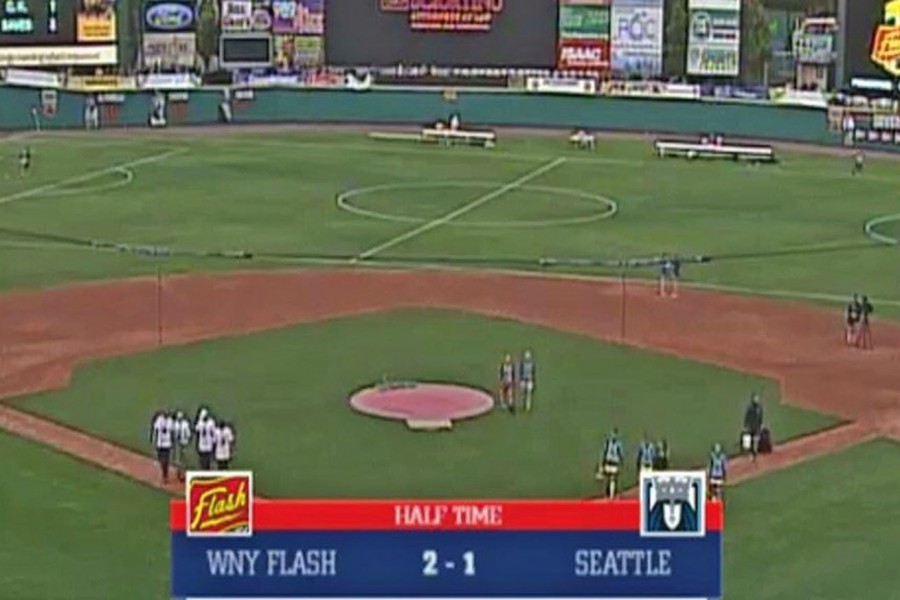 It’s the middle of the NWSL season, with some players in the league gearing up for the 2016 Rio Olympics and those remaining about to take a break due to the Olympics.

Of course, the league was in the news for all the wrong reasons last weekend, as the Western New York Flash hosted the Seattle Reign in a secondary venue due to their regular stadium being booked for a concert. The new venue is a baseball field, and rather than sod part of the infield, as New York City FC do at Yankee Stadium and a handful of other American soccer teams do, the Flash opted to play the game entirely in the outfield. The result? The field was less than the minimum 100×70 yard requirement by NWSL standards, instead clocking in, officially anyway, at 58 yards wide, with the league granting a waiver approving it.

At the same time, what flew under the radar in the midst of the tiny field was that the entire field appeared to be crooked, something demonstrated both from a wide view…

This is shocking, disrespectful & such a shame that we as professional players, are expected to play on this surface pic.twitter.com/5uLx36WHm6

…and from field level:

Our players are the center of our half, zoom in and see the cones, that’s the center of their half. 7 yds off @NWSL pic.twitter.com/6HGFB5RxKD

All in all, it made for a far from ideal situation.

The response the night of the game was swift, with fans, media, and players weighing in. The result was a speedy apology from the NWSL for approving the field conditions, with subsequent promises to investigate the situation in depth.

While some offered the reasonable critique in the aftermath of the game that many media outlets’ reporting of the terrible field was hypocritical because they don’t normally report on NWSL matters, only when there is a “bad” story, there’s no question the harsh criticism and widespread coverage contributed to the quick statement from the league. And in some ways, it’s laudable that league commissioner Jeff Plush held up his hand, so to speak, and responded quickly that a mistake had been made.

But in the following days, the story has taken on a new dimension. The players were emboldened, in a sense, by the unacceptable pitch and responded publicly to what they feel has been a willingness by NWSL to accept lowered standards. Players like Megan Rapinoe continued to criticize Plush after the apology, as she said in a Tweet: “Of course [NWSL] has to apologize, but all [Plush] said was ‘we knew it wasn’t up to standard, approved it anyway, sorry’ Apology not accpeted (sic).”

Rapinoe followed it up with a sentiment that many players appeared to cite as the heart of the matter: “I sincerely hope [Plush] understands how disrespected the players feel in this moment. Some players play for almost no money, the least they should be able expect from [NWSL] is respect and fair treatment.”

Since Saturday, the critiques from players seem to have increased, especially a blog post from Rapinoe’s USWNT and Seattle teammate Hope Solo detailing the realities of being an NWSL player, with the theme that overall standards in many aspects are below par.

In the context of the USWNT’s fight over a new Collective Bargaining Agreement with U.S. Soccer and the star players who have filed a complaint with the EEOC for equal pay with the USMNT this year, perhaps the complaints are not a surprise. The same players involved in that fight spoke loudly condemning the Flash’s field. But it was a host of other players, too, not regulars on the national team, but also internationals and non-national team players, who also spoke up on social media complaining about the conditions.

The field in Rochester and subsequent player responses boil down to one thing: The players are sacrificing a lot and apparently aren’t willing to take it lying down anymore.

NWSL is in uncharted waters this season, with the league entering its fourth season, the longest of any women’s first division league in the United States. Given the two prior leagues that folded due to financial issues, players realize they have to make many sacrifices — in their pay, accommodations, and standards of professionalization — in order to help the league find stable footing and be sustainable not just for a few years, but hopefully for generations.

In that way, the players, from the high-profile USWNT stars to the amateur players who literally aren’t allowed to be paid to play, acutely understand the financial realities at the moment. Women’s professional team sports are still in a pioneer phase, no matter the track record and sustained success of the national team program, and every single player suiting up in the NWSL knows she cannot expect “fair” market value and the same general standards as even MLS players, due to the quest for long-term sustainability.

But the weekend’s events with the tiny field illustrate a tipping point, perhaps, in player relations with their teams and the league. Players are not being greedy when they ask for a regulation field, medical equipment to be ready when a player is injured, reasonable training and locker room facilities, decent hotel rooms, and yes, fair pay. That last issue may be the thorniest of all, but the preceding concerns show many upgrades are needed to establish and maintain a professional standard, something that players say isn’t happening. And who would know better than them?