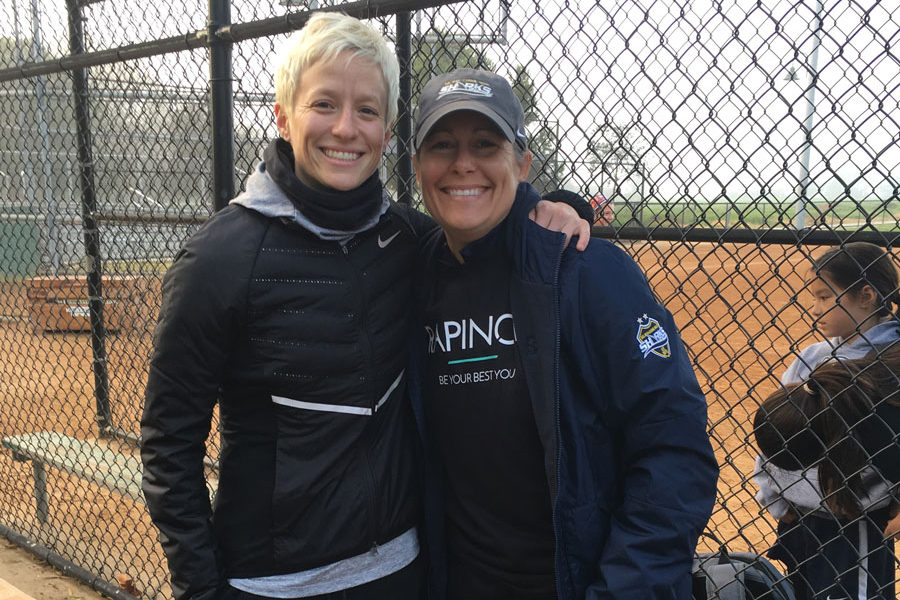 A born and raised San Diegan, Mac Millan was a standout athlete as a child, eventually specializing in soccer and going on to play at the University of Portland where the accolades just kept rolling in. From the collegiate game, to the professional level to the international echelons of the United States Women’s National Team, to the Del Mar Carmel Valley Sharks where she currently serves as Executive Director, Shannon Mac Millan has succeeded everywhere she has been.

Lately, she has been in the news as the most recent member to join FS Investors, the group looking to build SoccerCity San Diego. Much has been made of the virtues and vices of the proposal, as plaudits and pitfalls alike have been circulating at an insane rate, and yet very little has been made of the individuals behind the scenes of SoccerCity and what commonalities a group like FS Investors have with a living legend and local icon like Shannon Mac Millan.

I wanted to know, so I asked Shannon Mac myself.

Dike Anyiwo: Thanks for taking my call today Shannon.

Shannon Mac Millan: You’re welcome, my friend, thanks for having me.

Dike Anyiwo: Shannon can you outline a timeline of the events that culminated in the announcement of your involvement with SoccerCity SD?

Shannon Mac Millan: “Basically, a couple of months ago, my office actually hosted a meeting for FS Investors when they first came out in the public about MLS and what their plans were. Them going to the youth club level was huge when it comes to garnering support, and towards the end of the meeting, I asked, ‘If we do get MLS, which I fully support, what are you thinking about going after a women’s team and an NWSL franchise?’

They kind of paused and the response from Nick was ‘If you look through the investor group, there are a lot more daughters than there are sons. That’s not lost on anybody.’

A few weeks later, Landon (Donovan) reached out and we had a meeting and we chatted about my philosophy and what I wanted to do with the community and from there it just evolved into a spot on the advisory board with Landon and helping them all learn about the San Diego culture and the environment of club soccer here and how we can improve it and give the game back to the kids and take the big business out of the game.”

Dike Anyiwo: “What do you make of some of the pushback in the last week or so from the naysayers on the Mesa? “

Shannon Mac Millan: “I’ll leave the business of politics to those folks but last week when Mike Stone came out in the press conference with the mayor, he said, ‘Most of you don’t know who I am because I prefer to stay in the background, but this is a legacy project for me,’ and that’s what the Investors have said since the beginning.

For Mike to come out and be in the public eye strikes a chord with me because I grew up in SD and I was truly truly blessed because soccer has taken me around the world and paid for my education. I played at and succeeded at every level and the opportunity to bring professional soccer to my hometown is beyond a dream come true.

Dike Anyiwo: So you’ve made the team. What’s next for you and SoccerCity? From what I gather, you’ll have some say in setting the foundation of the youth program?

Shannon Mac Millan: Our main focal point right now is the City Council meeting in June. We have over 100,000 signatures and our goal now is to ensure we get this thing on the ballot in November 2017. We want to make sure the people’s voices are heard. We’ll take a look at the specifics on November 8th of who has what job, but right now it’s all about getting the people out to vote.

We’ve got a tight window, between now and June, but we’re going to be rolling out a lot of fun stuff. Every time I talk to these folks it’s all about the community and making it stronger. You look at the FootyMcFooty Face thing and see how they swung a prank from jokers in LA into a positive for San Diego. Over $2,500 from sales of those shirts went to the Womens’ Deaf National Team which is coached by Joy Faucett, a fellow teammate of mine. They’ve won a couple of World Cups, but they fly under the radar a little bit. They aren’t supported by U.S. Soccer but FS Investors very quietly did an amazing thing for them.

Another $5000 went to local charities YALLA and The First Goal.

That isn’t something that makes headlines, but that’s one of the things that is admirable about this group. They are concerned with doing the right thing. They turned a joke into a positive to help grow the soccer community. This soccer community is strong.

We’ve all seen it when the National Team rolls around, you see these American Outlaw folks singing and dancing and chanting and leaving the game just as tired as the players. There is something special here in San Diego.

Shannon Mac Millan: “Qualcomm is just sitting there right now and it’s a drain on San Diego. There isn’t another plan for Mission Valley. These guys have come up with a solid plan, to my knowledge, the only plan out there. My fear is that if this thing doesn’t get passed, I think that Qualcomm will sit there and become even more of a drain until it crumbles to the ground. Nothing will get done for YEARS if this doesn’t happen.

Everyone who is out there in the soccer world who supports this, look up your representatives and ask them to support this. No one is saying that we need to approve this. We just want the chance for the people to vote. Vote for it. Vote against it. Just be informed about what the options are.

People need to contact their City Council representatives before June 12th. Send letters, send emails, make phone calls. It can be quick and easy. Let them know why they support and why they are behind it.”