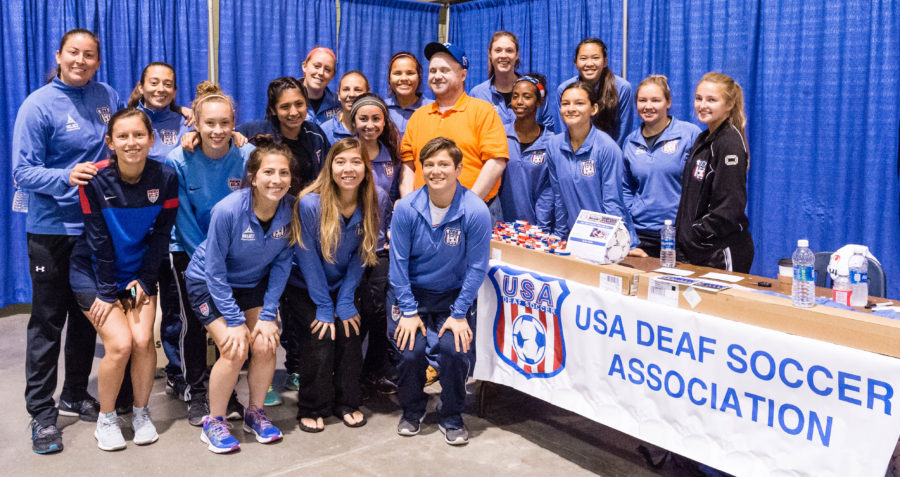 Deafness is a hidden ‘disability’. In sports such as soccer, players face certain hidden disadvantages, such as not being able to hear their coach’s instructions during a game, a referee’s decision or even the roar of the crowd. Oftentimes deaf soccer players compete regularly against their hearing peers and these aspects of the game, which many of us take for granted, can make a difference during the course of a match.

Players must have an average hearing loss of 55 Decibels or more in the best ear. All players competing in deaf matches must remove all hearing aids before playing which creates another obstacle to overcome, balance – another important advantage for a hearing player.

Carrie Taylor: How did you get involved?

Amy Griffin: The former coach, Yon Struble at Carnegie Melon heard that I knew a little sign language.. what he didn’t know was that “a little” meant… teensy, weensy.  However, I became aware and enthralled by sign language as a means of communication watching my cousin’s son (who is deaf) interact with his family.  When he became deaf due to illness, his family immediately learned sign language and all the cousins learned the basics and it was really fun to watch the interactions and see Josh thrive in his environment.

Carrie Taylor: Tell me what is on the horizon for the Deaf Women’s National Team? I think there is something in Seattle soon?

Amy Griffin:  Initially, we were to be training for the Deaflympics.  However we do not have the support of our association to attend due to the political unrest in Turkey, the host nation.  I am extremely bummed for the team to not get the privilege of attending and seeing, experiencing thousands of deaf athlete, fans, organizers in one place at one time.

So… we are going to continue to train, keep the talent pool growing and create more awareness about the team and it’s successes.

Our training camp is in Seattle, June 20-25th.  We welcome anyone to attend training or attend the Seattle Reign game on 24th where team will be recognized and have the World Cup Trophy on hand.

Carrie Taylor: How does a player qualify to make the team?

Amy Griffin: Through training camps the players are selected.  Since players have to pay to play.. it can cost up to $7,000.00 to play in a world event… so sometimes the pool shrinks to those that are good enough and can afford it.  Every camp is meant to help the team improve as well as an evaluation period.

How many events a year does the team play in?  We only have Deaflympics (which we are not attending) every 4 years and the Deaf World Championships every 4 years.  Due to lack of game opportunities, we are looking to host a world friendly tournament next summer.

Carrie Taylor: How is the team funded?

Amy Griffin: 100% team fundraising opportunities and nice people that donate miles, dollars, their homes, vans, fields, etc. for camps.  We sell T-shirts on ETSY and have earned a grant.  Each 4-5 day training camp costs each player approx. $600-900 depending on flights, etc.

Carrie Taylor: How could a person help support the team?

Amy Griffin: Tax Deductible donations, donating airline miles, helping spread our story through social media – it may seem like a little thing, but it has gone a long way for the USDWNT

Soccer City SD has jumped on board by selling shirts here that support the team: Footymcfootyface.com

Carrie Taylor: What is the best memory coaching these women that you have had?

The World Cup chaos of Joy, Amanda (interpreter) and myself being one of the only hearing people at the tournament.

Carrie Taylor: What are the goals for the future?

Amy Griffin:
1) Seek out sponsorship opportunities.
2) Create awareness through getting our team out in the communities to tell their story.
3) Continue the winning tradition.

Carrie Taylor: How have you grown as a coach during being involved with the program?

Amy Griffin: I have a much deeper appreciate for the deaf and hard of hearing and all they deal with on a daily basis.   I am a better coach as I have learned how to be much more clear in communicating. I believe I have improved on sticking to one focus at training and not trying to cover too much.   I do not underestimate the power of communication J

Carrie Taylor: What impact has the program had on the players involved?

Amy Griffin:  You would have to ask them as I am sure there are varying levels in which this team has impacted each individual and in many different ways.  If I can find some articles on the players I will share them with you.  They truly are an inspiration and I’m thankful you are helping to share a piece of their story.