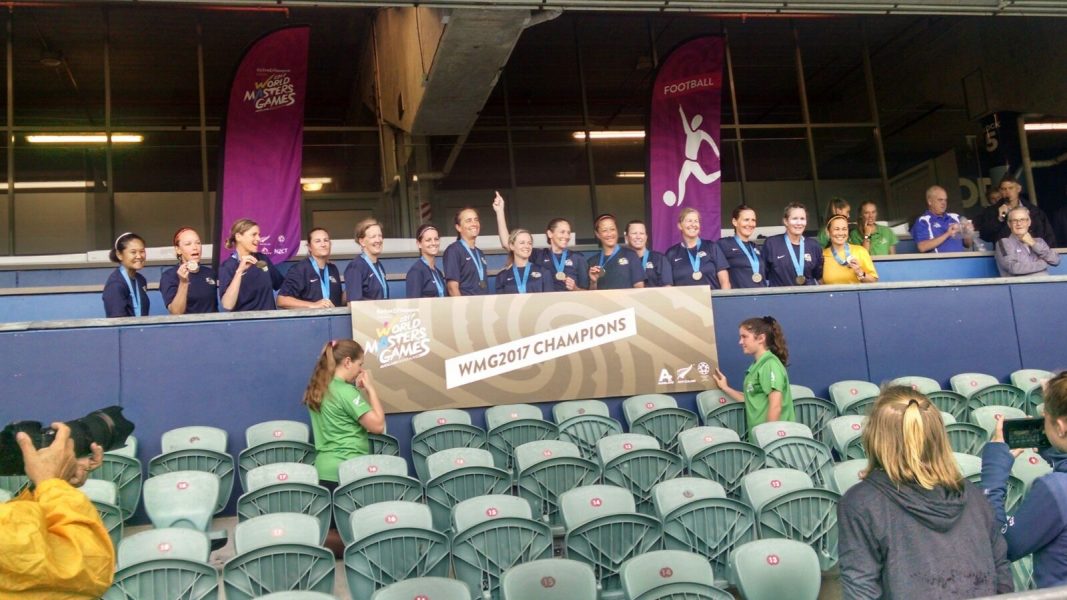 What do you know about the World Masters Games?

Carrie Taylor: What can you tell me about the World Masters Games?
Yuki Zeigler: This year they were held in Auckland, New Zealand. The World Masters Games are a series of sports that are basically the Olympics for older adults starting past age of 30. We had participated in Italy in 2013 and again this year. The event started 16 years ago and is made up of multiple sports. In Italy, we sent over a 40s team, winning the gold against Canada and this year we went over with two teams. One in the 35s and one in the 40s divisions, we won the gold in both.

Carrie Taylor: What was a key moment of the tournament?
Yuki Zeigler: One the the key moments happened in the quarterfinals for the 40s versus Australia. Lu Synder the owner/president of the San Diego SeaLions scored vs Australia, for us to win 1-0. It gave us a better road to the finals. We went on to beat Canada in the finals. Our teams played with great chemistry, we really played for each other.

Carrie Taylor: What do the 2021 games bring for your team(s)?
Yuki Zeigler: In 2021, the games are in Osaka, Japan and based on the makeup of our teams, we might try to take three teams, one in the 35s, one in the 40s and one in the 50s. We like our chances as returning champs.

Carrie Taylor: What is the make up of your team? And how does someone get involved?
Yuki Zeigler: We had 16 players on the roster, and we usually take recommendations from current team members. Then we usually have the newbies guest with us in tournaments so we can make sure they fit with the teamwork and flow. This year, Julie Foudy, was suppose to go to New Zealand with us, she had her ticket and everything, but she needed to launch her book so she had to pull out.

Carrie Taylor: Tell me about your soccer background playing?
Yuki Zeigler: I grew up playing in Diamond Bar, and played at Cal State San Bernardino for two years, then transferred and finished off at San Diego State. I stayed active playing on many women’s teams and attend many tournaments with the group each year. We play every four years in the World Masters Games which we have been World Champions in the past two years.

Carrie Taylor: What have you been involved with in Sports Marketing?
Yuki Zeigler: A lot, I started with the Anaheim Splash as the Director of Operations. From there I spent time at the Flash, the LA Galaxy and the San Diego Sockers. I also worked as a consultant for MLS for 10 years. My involvement with the Men’s World Cup in 2010 and 2014 was via a tour company and I also worked the 2012 Olympics and the 2015 Women’s World Cup and 5 Gold Cups.  I’m also working the International Champions Cup this summer.

Carrie Taylor: Coaching aspects?
Yuki Zeigler: I’ve coached soccer for over 30 years on and off.  I started with an AYSO All-star team and then got into high school and eventually into club.  Coaching youth soccer has not only made me a better adult player but I’ve been able to manage quite a handful of teams with much success.  I enjoy figuring out what motivates players both adult and youth and try to get the best of them out on the pitch.

Carrie Taylor: Best soccer memories?
Yuki Zeigler: So many, but two stand out. When I first started working for the Anaheim Splash, was very memorable for me. I came into that job via a connection as I had been working in marketing with minor league baseball. At that point, I was so excited to be able to work in a sport that I was so very passionate about. Another favorite memory was being able to attend nine games in the 2010 World Cup in South Africa. Being in a culture such as that and watching the World Cup was an amazing experience.

Carrie Taylor: What are your thoughts on the state of youth soccer?
Yuki Zeigler: Well, I have a lot of thoughts. First of all, I have an 11 year old daughter that plays, and I feel like we adults are making it too competitive for the players. Many of them are burned out by the time they are in high school or when they get out of college and I think there is a correlation to many women not staying involved with the game. We need the players to enjoy it, fall in love with the game like I did. We need to educate the parents on the fact that they are over focused on winning. Kids are having private trainers, playing too many games and everything is over-structured. Also players need to play multiple sports, as it trains different muscles, keeps their minds fresh, and lessens the burnout potential.

Carrie Taylor: How can we re-group and get back to the “for the children mentality?”
Yuki Zeigler: The money that some people are able to make has driven the craziness. If you take away the big money aspect, you might be able to see who is really in it for the players. For me, I have my daughter play with a coach that I and she believes in, not necessarily the club. More quality and less quantity for games would lessen the pressure as well.

Carrie Taylor: Why do you think there are not more women and girls going into careers in the game?
Yuki Zeigler: I think they might be totally burnt out. Their passion gets dampened because of coaches, because of pressure, so maybe they don’t choose it as a career path. We need to work on bridging the gap as many college players are not continuing to play or get involved after college.

Carrie Taylor: Important people who inspired you in the game?
Yuki Zeigler:  Carlos Juarez, who helped me get into coaching.  Had I not gotten into coaching I wouldn’t have met other people along the way to help me get to other avenues of soccer.

Rene Miramontes, who shared the same love for this beautiful game and who helped further my coaching. Brian Quinn, such an advocate of soccer who I coach with now at Bishops.  His passion brings out the best in all players and truly makes every day on the pitch count.

Carrie Taylor: Shout outs to any other people?
Yuki Zeigler: Shout out to Marcelo Balboa, who is not only one of the best defenders in US Men’s history, but is just a regular guy who always keeps it real.