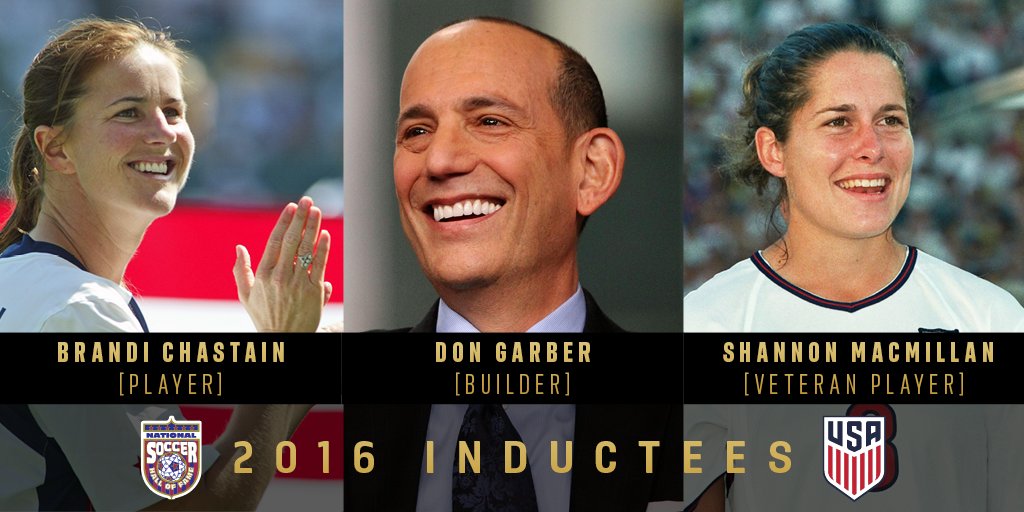 On May 5th, it was announced that San Diego’s very own Shannon MacMillan was elected to the National Soccer Hall of Fame.

After a 12-year-career that included a whopping 176 matches for the U.S. Women’s National Team, it’s no surprise that the highly-talented veteran was chosen as a member of the 2016 Hall of Fame class.

In an exclusive interview with Soccer Nation’s Cesar Hernandez, MacMillan opened up about her massive achievement, her early days in women’s soccer, and her current role as the Director of Club Operations for the DMCV Sharks.

Soccer Nation: How does it feel to be a part of a select few who have been inducted into the National Soccer Hall of Fame?

MacMillan: I have to be honest and say it’s still sinking in, but it’s definitely pretty special and amazing. It’s definitely something that has been a long time coming.

SN: Looking back, when did you first know that you wanted to become a professional soccer player?

MacMillan: I would have to say ever since I was a youngster I dreamt of being in the Olympics. Long before [women’s] soccer was even an Olympic sport, when I was 7, 8, 9, 10, I just remember being glued to my tv and watching the Olympics. Summer, winter, it didn’t matter. I was just glued and wanted to be a part of it.

I played a few different sports, but soccer was the one for me that I was the most natural at and that I truly had a passion for. I dreamt of it a long time before it was even a possibility.

SN: When you were first involved with the U.S. women’s national side in 1993, what was it like to be a part of a team that had only been around for less than 10 years?

MacMillan: It was pretty amazing. I think we all truly played for the true passion of the sport. We weren’t getting rich off of it, we just really had that bond of loving the game. We wanted to challenge ourselves and push ourselves to be the best that we could be.

We did a lot of self-promotion. We would be out signing autographs, doing appearances and promoting each and every game. It was part of something unique and something that will never happen again within that sport because it has grown so much, but we took pride on building it and setting the foundation.

SN: What obstacles did you have to face in the women’s game during the 1990’s?

MacMillan: For one, we didn’t get paid what the athletes are getting paid today. It wasn’t by any means something where we were getting rich and living the high life. We worked hard and early on the team existed off of per diem, and then U.S Soccer stepped in and that has definitely changed drastically over the years.

SN: Looking back at 1999, could you describe what it was like to be a part of that historic World Cup?

MacMillan: How much time do you have? [Laughs]

I remember driving to Giants Stadium for the first game. Literally, we were stuck in traffic on our bus and we all started to hit this panic mode of “Oh my god, we are going to be late for our game!” Then all of the sudden, our police escort brought us onto the shoulder and we started to realize that all of these cars were coming to the game. That was one of the first times we got the chills and thought, “Wow, this is really happening.”

There’s truly no words that can explain each and every game. That team was so close and we were all working so hard for each other. We were trying to really make an impact out there to empower these young women. To have these dreams and to believe in them and go after them.

It was a lot riding on our shoulders and we needed to win it all. We had a lot of pressure that was self-imposed, but it was one heck of a journey.

SN: A little bit of a tangent here, but I was actually at the final in the Rose Bowl. I was just a kid, but I wish I could have told myself the significance of what I was experiencing.

MacMillan: You know what’s really cool, I was an adidas athlete during my whole playing career, and one of the adidas employees was at the top of the [Rose] Bowl and they took a panoramic shot. It has the whole stadium, it’s got the scoreboard and it says record crowd of 90-bla, bla, bla [90,185]. adidas blew it up for us, and it’s massive. It hangs down in my hallway. Literally almost every single person that comes through my house, people I didn’t even know back then, were like “Oh my gosh! I was there, look, I was sitting right over here!”

I wish I could take it out of the frame and have everyone do a pushpin. 95% of people who come through my house say, “I was there,” and long before I knew them. It’s kind of amazing to see and to just look at that, it’s really special.

SN: When did the transition from player to coach happen, and what inspired it?

MacMillan: For me, my college coach Clive Charles made a difference in my life. Not only on the field, but who I am as a person, as a coach, as a mom. As a coach, it’s a special gift to be able to be a coach that can really have an impact on these young player’s lives and help shape them to do good things.

I think about my college coach Clive Charles and all he did for me in regards to life lessons and teaching me how to extract those from the game, and be a good person.

It’s imperative for me to give back to the game that has been so special to me. It has taken me around the world and reach every dream I have ever had. Now, it’s important to give back. Even if it’s just 5% of the impact that Clive had on my life, if I could just have that small of an impact on someone else’s life through my coaching then I know I have done a great, great thing.

It’s important to pass on what I’ve learned and what works. Help give these kids tools to succeed in life first and foremost, because a small percentage go to college and an even smaller [percentage] go to the national team. This great game can teach so much to help these kids succeed in the work force and whatever they want to do later on.

SN: What are your thoughts on the current state of soccer in San Diego?

MacMillan: [Laughs] That’s a loaded question. To be honest, I think it’s pretty shameful. I think it has become such a big business with the recruiting, and kids are getting burnt out at these young ages.

I’m appalled at some of the sideline behavior from coaches. Grown men and women, more so the men, that — it just makes my stomach churn. It’s sickening and I think it’s a shame because you have coaches screaming at 10-year-old girls. How is that helping them? It’s tough and it’s important for me to try to really make it about these kids and their journey.

I think because I have accomplished everything possible in the soccer level, it’s not about me and my ego. I’m really truly able to put the kids first and foremost.

SN: Now, as Director of Club Operations for the DMCV Sharks, you have this opportunity. What goals do you have for your organization?

MacMillan: Plain and simple, it’s not about the results. I want coaches that are just good people that are going to be able to pass on to these kids the passion for the game and teach them the skills and tactics that they need. Also to empower these kids to just really believe in themselves and have confidence to set dreams and goals and to go after them.

SN: If you weren’t involved with soccer, what would you be doing right now?

MacMillan: If I wasn’t involved with soccer, I would probably be a teacher. Hopefully a mom still but definitely a teacher. I look back at growing up and I really had some great teachers along the way in the classroom that really made an impact on me as well. The greatest gift you can give is to set up a kid to succeed.

SN: In a way, you are a teacher right now.

MacMillan: Absolutely. That’s what I tell all of my coaches that we have. We are teachers. Don’t take that for granted and know that what you say and what you do, whether you’re on the field or off the field, after the game, these kids are watching.