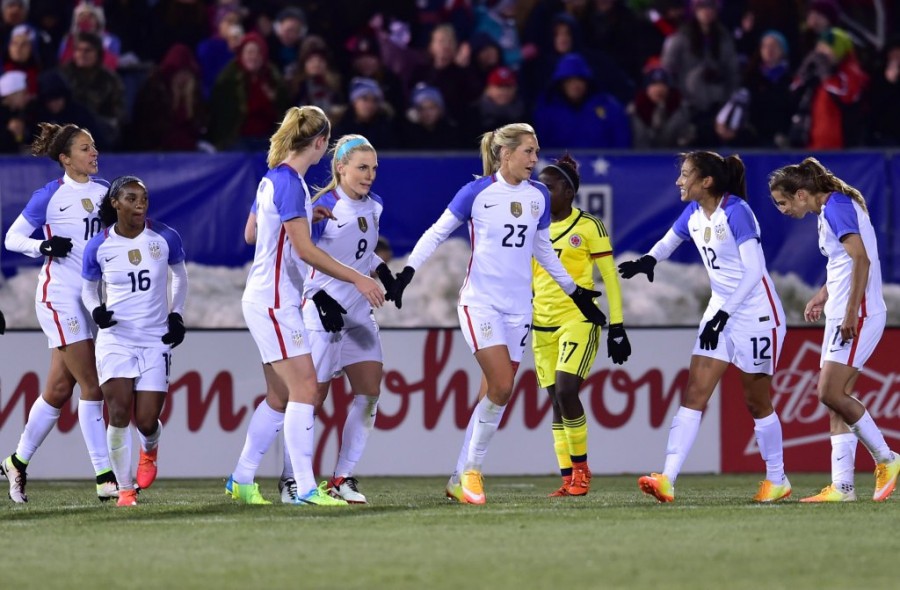 The U.S. Women’s National Team (USWNT) kicked off the first of six friendly matches before the Olympic Games with a 7-0 drubbing over Colombia at Pratt & Whitney Stadium in East Hartford, Connecticut on Wednesday night.

It is the 10th consecutive victory in 2016 for the USWNT, who have outscored opponents 39-1 during their current streak. Also in that time they have won the CONCACAF Olympic Qualifying and the 2016 SheBelieves Cup.

The action started just under the half hour mark when the USWNT scored four goals in 12 minutes. Crystal Dunn knocked home the opening goal in the 27th minute when she poked the ball away from a Colombian defender in the box and fired a low screamer for her eighth goal this year. Five minutes later, Allie Long headed home her first international goal. UCLA forward Mallory Pugh then scored her second international goal when she slipped through the Colombian defense on the left side and then sent a low shot into the far post. Carli Lloyd capped off the first half onslaught with a goal of her own from a Pugh cross.

The second half wasn’t any better for Colombia as Tobin Heath scored the fifth USWNT when she volleyed a Dunn cross into the net and Long scored her second goal when she redirected Julie Johnston’s cross into the open net. Los Angeles native Christen Press scored the final goal in the 74th minute when she curled a beautiful bender around the Colombia goalkeeper just inside the box.

Up next for the USWNT is a re-match with Colombia on April 10. That will be followed by a friendly against Japan on June 2. U.S. Soccer has plans to include three more friendlies before the Olympics.