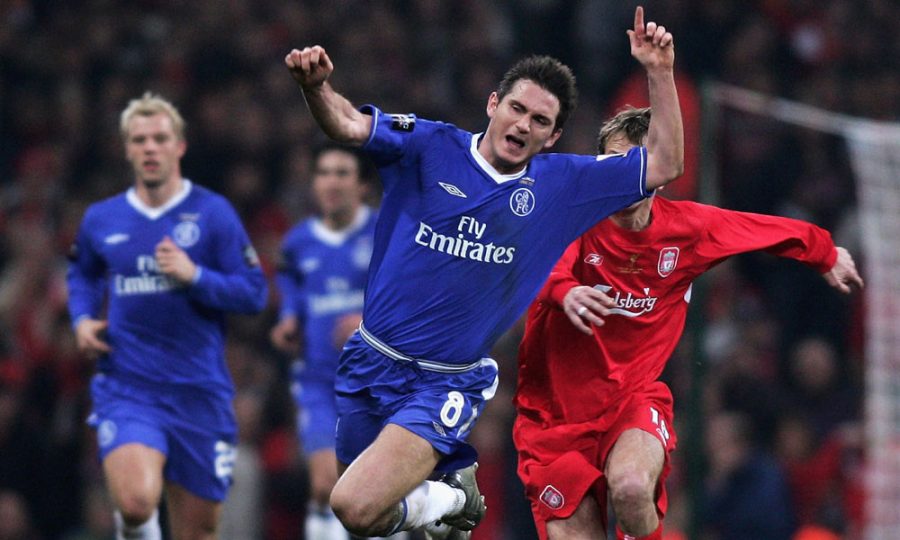 The Best Liverpool – Chelsea Clashes of the New Millennium: Part 1

With Liverpool and Chelsea bound for Southern California, and set to square off in an International Champions Cup match at the Rose Bowl on Wednesday, Soccer Nation’s Nate Abaurrea took a glorious trip down memory lane. Here is the first installment of his top Liverpool – Chelsea moments of the new millenium ordered chronologically from 2000-2016, a span that has seen some of the most memorable clashes in the history of the Merseyside v. London match-up.

It was a dark, dreary night on Merseyside, with thousands of empty seats and two teams that had been underwhelming in Premier League play. The fans that did show up on this night were treated to a delightful knockout encounter that saw Danny Murphy open the scoring for Liverpool, only for Gianfranco Zola (arguably the greatest Italian to ever play in England) to head home a Celestine Babayaro cross in front of the Kop to level the score. The man the Liverpool supporters affectionately called “God” scored the winner in extra-time, sending that season’s eventual League Cup winners onto the next round.

In a season that saw Liverpool win three different cup competitions (League Cup, FA Cup, & UEFA Cup), the race for a Champions League spot was just as daunting, with the likes of Arsenal, Leeds United, Chelsea, and even Ipswich Town all in the hunt going down the final stretch of the campaign, Manchester United running away with the league title. The top two finishers received automatic entrance into Europe’s marquee competition, while only third place received a playoff spot, contrary to the two playoff spots England now holds. Liverpool had a great opportunity to leap frog Arsenal into second when Chelsea came to Anfield in early May. The match ended up being a showdown of two deadly strikers. Michael Owen and Jimmy Floyd Hasselbaink each netted braces for their sides, the latter scoring a late equalizer. Hasselbaink’s 23 goals saw him lead the Premier League, while Owen’s 16 were enough to help his side eventually finish third, in addition to the cup treble.

With England now holding four Champions League spots, this final day encounter between Chelsea and Liverpool was set up to be a thriller, with tens of millions of pounds on the line. Both sides were even on 64 points, with Chelsea holding 4th place on superior goal difference. Liverpool knew they had to win, and when their “Flying Finn” headed home in the first half, it looked as if they just might. Sami Hyypia, wearing the captain’s armband, got on the end of a Danny Murphy cross and made no mistake. But Chelsea came roaring back, their captain Marcel Desailly heading home the equalizer, and Jesper Gronkjaer scoring what would famously be labeled as the “1 billion pound goal”, aka the goal that made Roman Abramovich buy Chelsea. Liverpool manager Gerard Houllier hung his head on the sideline, while Chelsea boss Claudio Ranieri celebrated one of the most important wins in the club’s history.

The 2004/05 season was the one that truly made Chelsea v. Liverpool a “rivalry”. Sure, there’d been some memorable encounters in years prior, but the clashes from this campaign took it to another level. The League Cup Final in Cardiff was an instant classic. It was Jose Mourinho’s first shot at a trophy as Chelsea manager, and the same for Rafa Benitez with the Reds, the two gaffers each in their debut English seasons. Liverpool took an early 1-0 lead through John Arne Riise, a rocket of a left footed volley past Carlo Cudicini off a floated cross from Fernando Morientes.

The goal, which came after just 45 seconds, was and still is the quickest in League Cup Final history. Chelsea, who were already running away with the Premier League title, were the heavy favorites, but it was Liverpool who were the better side throughout most of the match. Steven Gerrard missed a golden opportunity to put Liverpool two up, and in the 79th minute, Stevie G put a header past Jerzey Dudek and into his own net to tie the score, with Jose Mourinho famously giving the “ssshhhhhh” sign to adjacent Liverpool supporters.

It went to extra time at 1-1, with Dudek playing one of the games of his life. Extra time however was oh so cruel to the Polish netminder, with Didier Drogba and Mateja Kezman each scoring from close range scrambles in masses of red and blue shirts, neither goal ever touching the back of the net. Antonio Nunez scored an equally funky goal for Liverpool from a yard out to make a real fight of it for the Blues, but Chelsea held on for the 3-2 win. Little did players, coaches, and supporters know, the two sides would meet again in less than three months, with a trip to the Champions League Final on the line.

Spine tingling. It’s the only way to describe the atmosphere inside Anfield on one of its most famous nights. Liverpool Football Club have one of the greatest histories of any English side in European competition, and it was this night, May the 3rd, 2005, that saw them return to their old glorious ways. The second leg of the Champions League semi-final was the fifth time that Liverpool and Chelsea went head to head this season, with all but one of those matches (the first leg six days prior, which ended in a 0-0 stalemate at Stamford Bridge) ending in Chelsea victories. Just over three minutes in, with the stadium already engulfed in a bed of Scouse noise, Steven Gerrard clipped a gorgeous first time ball into the path of Milan Baros, the Liverpool striker trying to get to the ball before Chelsea goalkeeper Petr Cech.

A collision ensued, which could’ve resulted in a penalty kick and a red card to Cech. Instead, the referee surprisingly played advantage, as players from both sides frantically scrambled toward the ball which was floating near the top of the six yard box. Liverpool’s Luis Garcia got to it first, and nicked it toward goal off a lunging John Terry as Chelsea defender William Gallas swung out a desperate leg to clear the ball off the line. The stadium erupted. The Liverpool players began celebrating. The Chelsea players were absolutely incensed. The goal had been given, the assistant referee’s flag saying that the ball had crossed.

To this day, we may never fully know if the goal should have counted. There was no conclusive angle, and goal line technology was not a thing (this incident certainly fanned the flames of those who advocated for that technology to be put in place). It is known by Chelsea fans as the Luis Garcia “ghost goal”. It is known by Liverpool fans as the goal that sent them to Istanbul, where they went on to win one of the most legendary matches of all time to lift the European Cup.

What is forgotten by many is the subsequent 93 minutes of football that were played at Anfield on this night, Chelsea needing just an equalizer to advance on away goals. Top notch goalkeeping from Jerzey Dudek was vital. Maniacal Barcelona supporters disguised as Liverpool fans taking turns running onto the pitch in the 2nd half played a part in an extraordinary six minutes of added time.

Djibril Cisse had an unbelievable opportunity for the hosts to put the game to bed in stoppage time, and could not do so. And Liverpool fans around the world still get the shivers when they see the ball fall to Eidur Gudjohnsen in front of the Kop in the dying moments, Dudek scrambling on the ground after a huge collision, as Chelsea’s Icelandic striker smacks a half volley from close range, the goal gaping as the ball flies right across the face of the frame and through a mass of six bodies, missing Didier Drogba at the far post by a matter of inches. If Gudjohnsen hits it any closer to goal, it probably goes in.

If he pulls it just a little wider, Drogba probably puts it in. It was one of the moments that screamed “written in the stars” for the Red half of Merseyside. The final whistle sounded. Most all of the Chelsea players fell to their knees and backsides, as tears of both agony and glory began flowing all around Anfield, followed by one of the most stunning, impromptu renditions of “You’ll Never Walk Alone” ever heard. AC Milan waited for Liverpool in the final, and we all know what happened on May the 25th, 2005. And what happened between Liverpool and Chelsea in the subsequent years was simply incredible, colossal Champions League encounters between the two English sides becoming the norm for the rest of the decade.

(Look out for the next five Liverpool – Chelsea matches in this exciting Siccer Nation series, as Nate spans the latter years of the 00’s, focusing mainly on the memorable Champions League encounters between the two sides.)