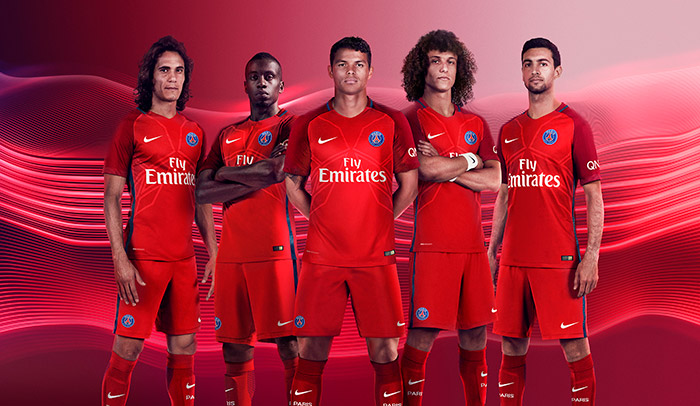 New PSG away kit represents the Tricolore and uses the club's own trademark hues. 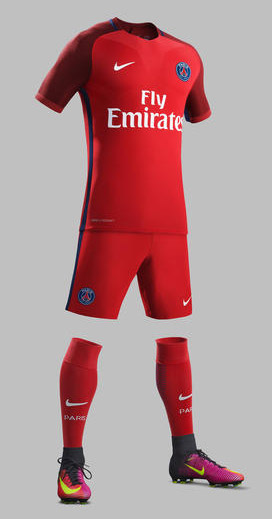 Currently on tour in the United States while taking part in the International Champions Cup pre-season tournament, Paris Saint-Germain have revealed their new 2016/17 PSG Away Kit. The new all red look will be on display during Ligue 1 and UEFA Champions league matches during the upcoming season. Although Zlatan Ibrahimovic has traded in his PSG strip for the red of Manchester, Paris’ team still has a wealth of talent and will be expected to take the next step in Champions League play with new manager Unai Emery.

This year’s PSG away jersey is based on the Nike Vapor template and includes Nike’s AeroSwift innovation for top level performance and comfort. The red shirt includes darker red sleeves infused with a black ribbed pattern that subtly shifts color during movement. Blue stripes run down each side of the jersey and around the back of the crew neck collar. The word “Paris” is on the back neck with “Grandeur” and “Passion” decorating the inside of each sleeve cuff for added detail. The PSG club crest is on the left chest and flanked by the Nike Swoosh. Sponsor logos are heat applied in white.

The kit is rounded out with matching shorts which continue the stripe down each side of the jersey. The PSG badge is on the right with the Nike Swoosh on the left. A blue linear graphic provides an added design element to the red socks which say “Paris” under the Swoosh on each.

The Nike PSG Away Jersey 16/17 along with a full range of Paris Saint-Germain fan gear is available now at http://www.soccerloco.com/psg.