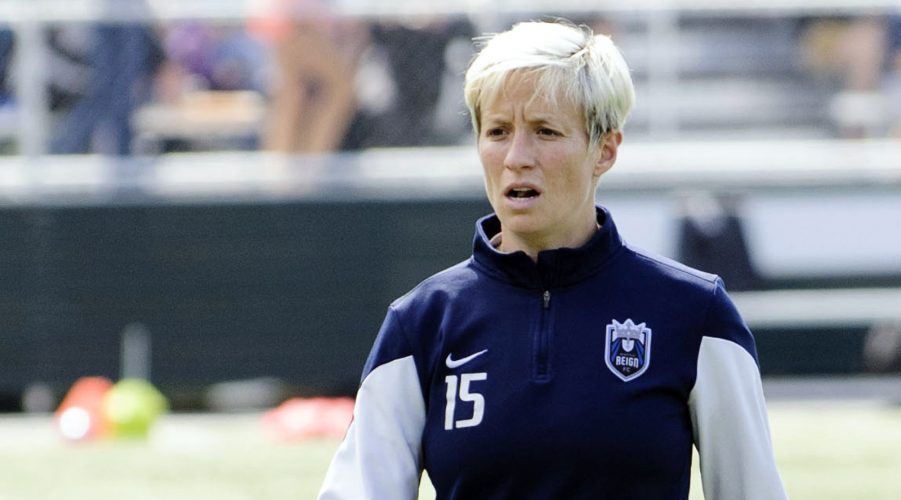 After the Seattle Reign released an official statement on Wednesday defending the protest actions of one of their players, United States Women’s National Team star Megan Rapinoe, the Washington Spirit provided quite the juxtaposition on Wednesday.

The Spirit were hosting the Reign in NWSL play on Wednesday night at the Maryland SoccerPlex, and were well aware of the buzz surrounding Rapinoe in the days following her public display of support for San Francisco 49ers quarterback Colin Kaepernick. Rapinoe was seen kneeling during the national anthem prior to her team’s most recent game in Chicago, and had said she “planned to continue doing so”.

The Spirit had their public address operator play the Star Spangled Banner earlier than scheduled, right as the players had reentered the dressing rooms after pre-match warmups, preventing Rapinoe from continuing her protest, at least on the night.

The Spirit released a statement within minutes of the incident, setting off a storm of debate on social media. The statement reads:

“In light of Seattle Reign and U.S. Women’s National Team member Megan Rapinoe’s public declaration that she intended to “take a knee” during the United States’ National Anthem tonight, we decided to play the anthem in our stadium ahead of schedule rather than subject our fans and friends to the disrespect we feel such an act would represent.

We understand this may be seen as an extraordinary step, but believe it was the best option to avoid taking focus away from the game on such an important night for our franchise.

While we respect every individual’s right to express themselves, and believe Ms. Rapinoe to be an amazing individual with a huge heart, we respectfully disagree with her method of hijacking our organization’s event to draw attention to what is ultimately a personal – albeit worthy – cause.

As a veteran owned team, the national anthem holds an exceptionally special meaning for this organization. Our owner Bill Lynch has lost personal friends during overseas conflicts and has other close friends who have also lost loved ones. Playing the national anthem prior to sports events became standard during World War II and was a way to express the team’s and fan’s patriotism and show support for the U.S. Military. The tradition of honoring our military and our patriotism before games is very important to us. We strongly feel that there are better ways to begin a conversation about a cause than tarnishing a tradition that is so important to so many.

To willingly allow anyone to hijack this tradition that means so much to millions of Americans and so many of our own fans for any cause would effectively be just as disrespectful as doing it ourselves. Professional athletes have incredible numbers of followers, to which we believe they have the ability to articulate a conversation with objectives and plans and begin a serious conversation directly, or through traditional media appearances, without insulting our military and our fans.

We do regret that this decision has denied the players who had no intention of taking a knee their own opportunity to honor our great country from the field. This is an issue we are communicating to and with them about personally.”

Yet again, as we’ve seen countless times since Kaepernick’s initial protest during an NFL pre-season game on August 26th, the dialogue has come back to the de facto argument about “disrespecting” and “insulting the military”. While this was curtailed significantly by the #VeteransForKaepernick movement on social media which featured thousands of displays of public support for the national anthem protest from active and former servicemen and servicewomen in the United States Military, this statement from the Washington Spirit directed at Rapinoe shows that the same hurdle is still in place in terms of convincing a massive faction of Americans that these protests have no direct correlation with the military.

Automatically labeling Kaepernick or Rapinoe as “un-American” or “disrespectful of those who have served” and painting the ‘perpetrators’ as people of questionable patriotism allows the grand points of their protests to be swept under the rug, subsequently avoiding important discussions for so many people on the range of topics brought to the table by these pieces of social action, topics like police murder of unarmed black men and women, racism among government officials and presidential candidates, marriage equality, and Veteran suicide rates, just to name a few.

In the first paragraph of the club’s statement, it is said that the Spirit did not want to “subject our fans and friends to the disrespect we feel such an act would represent”. Or perhaps the thought of subjecting young children and adults alike to meaningful dialogues on the topics raised by Kaepernick and Rapinoe was just too frightening to conceive. God forbid a young girl or boy would see Megan Rapinoe kneeling during the anthem and ask her mother or father, “why is she doing that?” Could you imagine how awkward that conversation could be? Could you imagine the discomfort of seeing a child learn meaningful things about the country in which they live? You just can’t subject people to that kind of “disrespectful” stuff.

The statement uses the term “hijack” on two separate occasions, the latter saying that allowing Rapinoe to “hijack this tradition that means so much to millions of Americans and so many of our own fans for any cause would effectively be just as disrespectful as doing it ourselves”. To “hijack” something means to “illegally seize”. An athlete using their first amendment rights to show a public display of unity during the playing of a song written in 1814 by a slave-owner (with lines glorifying the killings of black slaves) and placed to the tune of an old British drinking song may not be worthy of the term “hijacking”.

One of the most interesting facts being discussed on the panels of Soccer Twitter and other social outlets is the personal relationship between Rapinoe and this particular NWSL opponent, the Washington Spirit. Perhaps that is better phrased as the relationship between the Washington Spirit and homosexuality. When the United States Supreme Court came to a historic ruling on June 26th, 2015, legalizing same-sex marriage, clubs all across the NWSL came out in support of marriage equality. There was only one club in the league that did not issue a statement regarding the monumental moment in American history. That club was the Washington Spirit.

Rapinoe has said publicly that as a gay woman, she feels she can relate to the feelings of Kaepernick in regards to saluting a flag that hasn’t always supported her and her way of life. How this ties back to the Spirit’s statement on the anthem protest is up for debate. However, one may be led to think that Spirit Owner Bill Lynch is not a firm believer in progressive thinking.

Rapinoe will continue her protest and solidarity with Kaepernick. Many wonder if she will kneel during the anthem while suiting up for the national team. Either way, she is being commended by countless individuals in the soccer world and beyond, the backing she’s receiving seeming to outweigh the heavy scrutiny. Playing the Star Spangled Banner while she’s in the dressing room was a cheeky move from the Washington Spirit. It won’t stop Rapinoe from speaking her mind.

The Reign next take the field at home on Sunday, September 11th. Their opponent? None other than the Washington Spirit.