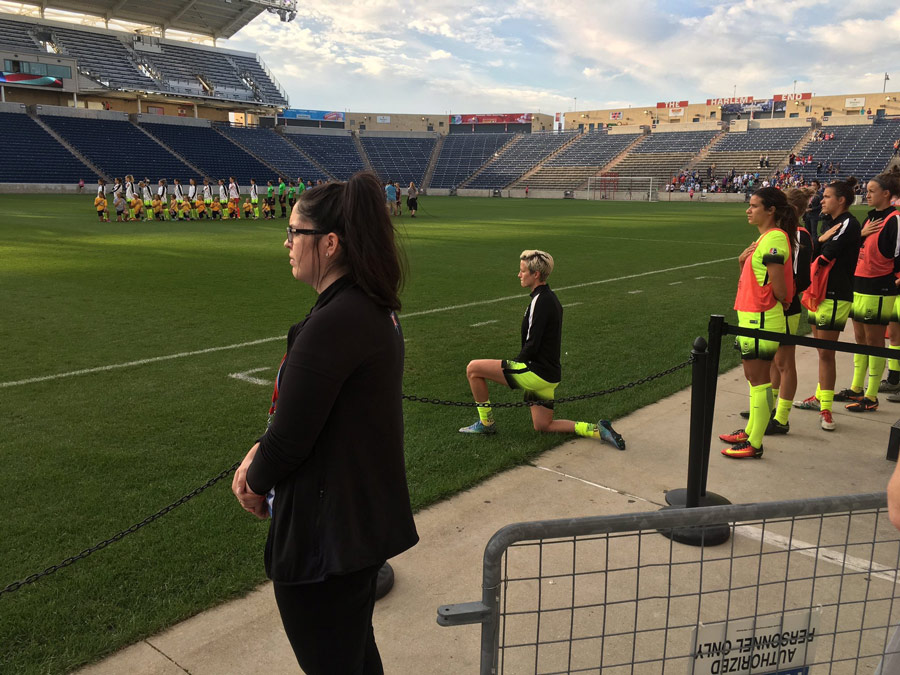 After the match, Rapinoe acknowledged that her action was intended to “keep the conversation going” in a tweet.

It’s the least I can do. Keep the conversation going. https://t.co/qwfHcqgV6J

Today, Rapinoe’s club released a statement supporting her action. In their statement, Reign FC “recognize Megan’s decision was offensive to some and a source of inspiration to others.”

The club indicated that they would encourage members of the team to participate in the full pre-game ceremony, but that they, “will continue to allow players to participate in the pre-match ceremony in a manner consistent with their personal beliefs, reflecting our respect for the rights earned and defended by those fighting for our nation.”

The public backing of Rapinoe’s action by her team echoes a statement issued by the 49ers.

“The national anthem is and always will be a special part of the pregame ceremony,” Reads the statement. “It is an opportunity to honor our country and reflect on the great liberties we are afforded as its citizens. In respecting such American principles as freedom of religion and freedom of expression, we recognize the right of an individual to choose to participate, or not, in our celebration of the national anthem.”

Megan Rapinoe is also a senior member of the United State Women’s National team and has indicated that if selected for the national team’s next match on September 15th she will continue her protest by taking a knee during the anthem.

Sports Illustrated writer Grant Wahl claimed that based on his research, “Rapinoe’s protest in a U.S. uniform would be unprecedented.”

At the time of writing, there has been no comment from the US Soccer Federation indicating an official position on Rapinoe’s intention.