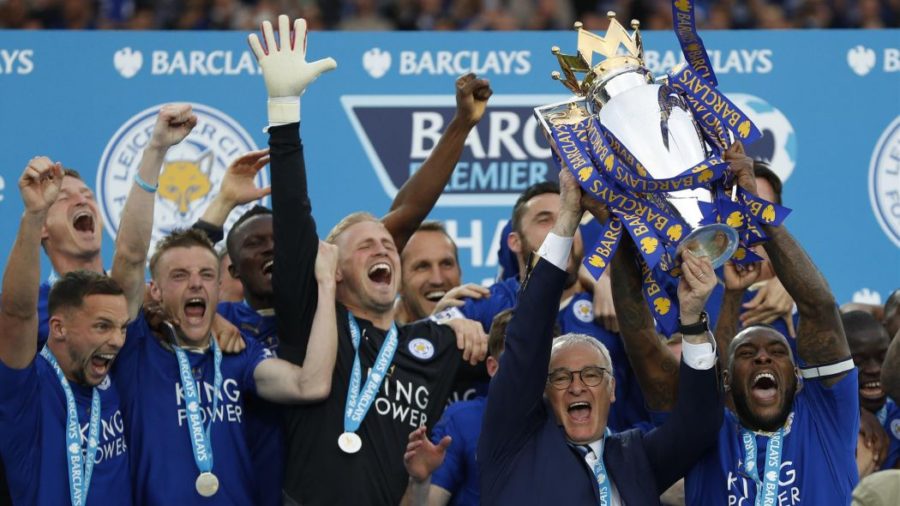 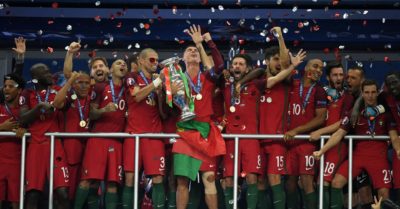 It was a symbolically twisted and historically emotional win for Portugal, one that extinguished the demons of twelve years prior, their Euro 2004 final loss when they were the heavily favored host nation that lost to a gritty Greece side by an identical 1-0 scoreline.

In ’04, everybody hailed Greece, as a star studded Portugal side that featured an up and coming teenager named Cristiano Ronaldo seemed to give everything they had in the tank. Greece deserved the credit for holding strong and pulling off the shocker.

This time around, most journalists, pundits, and fans alike wanted to pin it all on a French choke, with many throwing ridiculous guilt trips at the Portuguese for playing “negative football”.

Nobody outside of Portugal seemed all too inclined to give credit where it was due, to a group of players who watched their best attacker, their captain and international superstar (Ronaldo) hauled off after 25 minutes, only to defend valiantly all the way to the bloody end, with substitute Eder scoring a sensational winner in the 109th minute as the game looked destined for penalties.

It was not the greatest tournament, and a side being crowned champions after winning just one game in regulation throughout the entire tournament is not exactly ideal. Perhaps Pepe puking on worldwide television at the conclusion of a game where he received the man of the match award was some sort of metaphor for the final and the tournament as a whole, but enough with the “negative football” talk. Portugal won the Euro’s. Ronaldo went from superstar to biggest fan / assistant coach. It was a massive upset in a competition filled with funkiness.

Now that we’ve had almost six months to reflect, Portugal’s triumph at Euro 2016 should rank as highly as it does because it represented what soccer is all about. This is a team game. When Ronaldo was knocked out of the game by a filthy challenge from France’s Dmitri Payet, the rest of the Portugal squad stepped up. They knew their leader, star, and driving attacking force would not be a part of the final push for immortality. They knew what they had to do. They defended. They defended some more. Rui Patricio was heroic in goal, making incredible saves and of course kissing his post after Gignac’s agonizing miss for the French. In the end, they were worthy champions, and they should be remembered as nothing less. 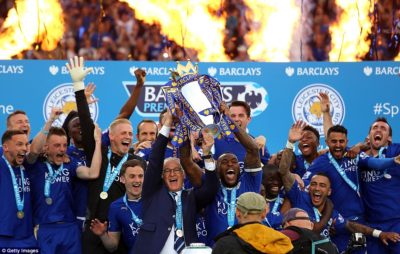 5000 to 1. Those were the odds of Leicester City winning the Premier League in the 2015/16 season, before a single ball had been kicked.

The Foxes were a team with a new manager (Claudio Ranieri), an old Italian taking his first job in England since leaving Chelsea eleven years prior, coming off one of the all-time great escapes that the league had ever seen, avoiding relegation with an unbelievable late flurry of positive results under then manager Nigel Pearson after occupying the cellar of the league standings for the majority of the campaign.

How they scrapped and clawed their way to survival in the spring of 2015 is still amazing. How they followed that claw job up with one of the greatest Cinderella stories in the history of sports is almost indescribable.

Jamie Vardy had a season long scoring party, his non-league to Premier League story serving as inspiration for millions around the world to never give up on their dreams.

Shinji Okazaki became a fan favorite with his lovely finishing, his frenetic and often goofy energy, and his uncanny ability to show up in the right place at the right time.

Jamaican strongman Wes Morgan held down the captaincy and the backline, his brute force balanced with a clear sense of courage and humility.

Kasper Schmeichel, the son of a Premier League legend (former Manchester United great Peter Schmeichel) showed that title winning goalkeeping is indeed something that runs in his family.

N’Golo Kante was the unwavering motor in the center of the park, covering more ground than the shadow of a large cloud with every step at the King Power Stadium, and every other pitch on which he stepped foot.

It was the fans at the King Power who should also be given ample love and credit for creating one of the best home-field advantages in all the land. It was as if the Leicester supporters knew they were in some kind of dreamland all along, and they just wanted to soak in as much as they can. They certainly did, and in doing so helped their beloved Foxes become Premier League champions. Many are still pinching themselves. It really did happen.

But oh how quick the world of football can move. Flash forward to the closing of the 2016 calendar and the near halfway point of the subsequent campaign, and the reigning kings of the Premier League are sitting in sixteenth place, just three points from the drop zone they so incredibly escaped two seasons ago.

Ranieri and his Foxes have no time or ability to look back on their historic achievement. They are right in the thick of a fight for survival in the top flight. They’re also into the last 16 of the UEFA Champions League, a very manageable two-legged tie (considering some of the other clubs remaining in the competition) with perennial La Liga light-heavyweights Sevilla. The FA Cup is on the horizon as well, with the transfer window also opening up in January, the Foxes surely looking to bring in reinforcements for the winter and spring.

It’s going to be a strenuous job for Ranieri, and he has made it abundantly clear that the number one task is avoiding relegation. Since he has no choice but to look forward, let us take one final look back. Let us give one last toast to the Foxes. Here’s to 5000 to 1. Here’s to Leicester City, the most improbable champions of the Premier League.

Newer Post
Commander’s Intent as a Weapon for Cultivating Creativity Within the Choke Hold of Robot Coaching.
Older Post
SoccerNation’s Top 16 of 2016 – (4 & 3)