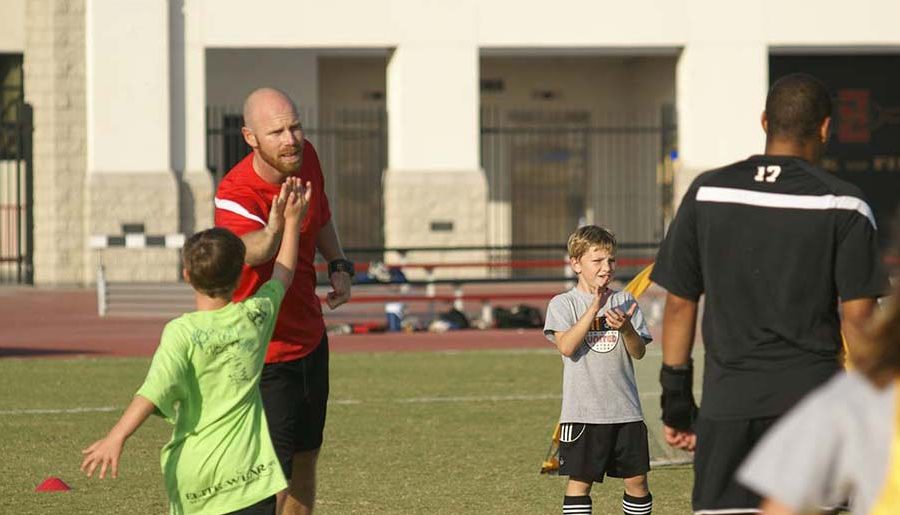 In Part 2 of the Sitdown, Abaurrea and Hall continue on the concept of goalkeepers often being “late bloomers”, and break into an engaging discussion on the modern evolution of goalkeepers playing with their feet.

Nate Abaurrea: Picking up right where we left off, I want to talk a little more about this idea of goalkeepers getting better with age. I recently commentated a match in Tijuana between Xolos and Pachuca. In net for Pachuca was Oscar “Conejo” Perez, a 44 year-old man who has played in two World Cups and started his professional career in 1993, the same year in which the opposing goalkeeper that night, Tijuana’s Manuel Lajud, was born!

What do you make of the career of Perez, and how does it relate to that never-ending learning process for goalkeepers that you speak of?

Matt Hall: It’s just an homage to the mental aspect of what goalkeepers do. The details of what we do are so minute. If you’re six inches off on your starting spot, whether it’s too high, too left, too right, it can be the difference between a goal and not a goal. You’ve got to take all those little moments and all those little things you learn as a goalkeeper, your starting spots, your positioning, what happens when a player cuts inside, what happens when you’re dealing with a bouncing ball… All these little moments add up, and you’ve got to learn those lessons each and every time.

These guys like Conejo Perez have obviously done this. Of course the physical component is always gonna be important, the ability to just athletically do something, but the mental components of goalkeeping can outweigh that sometimes. So if you’re intelligent and have a firm understanding of your positioning, if you can see things before they take place and truly anticipate the game, you can play this game a lot longer at a very high level.

Nate Abaurrea: I remember growing up and studying goalkeepers like Jorge Campos with Mexico, Rene “El Loco” Higuita with Colombia, and Jose Luis Chilavert with Paraguay, these incredible Latin American keepers who could play with their feet as well as anyone. They even took and scored free-kicks.

It used to be more of a Latin thing, goalkeepers who were confident with their feet. It has certainly evolved into more of a worldwide approach these days, the necessity of a keeper being strong with his feet. It can be a blessing. It can also get a keeper into a lot of trouble. Where do you stand on this, and how do you help a young keeper find that proper balance in this regard?

Matt Hall: It’s an important aspect of the game in the modern era. There’s no doubt about it. For me, it’s really just about decision making. I want every goalkeeper that I coach to be comfortable with their feet. I want them to be able to be an outlet, to be able to change the field and switch the point of attack.

Above all, they have to make good decisions, because at the end of the day, goalkeeping is a lot more pragmatic than every other position. The risk to reward ratio is a lot greater. A young keeper needs to buy into that concept. As goalkeepers, we never want to let our team down, and that’s got to be a motivating factor in never putting ourselves in situations of danger.

But I also want to push young keepers to be confident in their ability to do things. I spend a ton of time with my keepers at all levels working out of the back and doing technical stuff with their feet, and they are all comfortable playing with their feet. But there’s a right a place and a wrong place, a right time and a wrong time. They have to learn that. And each goalkeeper coach or manager is gonna have a different philosophy on when and where that is.

I mean, if you watch Man City right now, it’s quite obvious that that’s a philosophy of Pep [Guardiola] and they’ve been very stubborn about wanting to play through the goalkeeper and playing out of the back and out of pressure. Most coaches aren’t that way. It’s all relative to what each program, each team, each club, wants to do. But I do believe that it’s extremely important, and it’s one of the most significant aspects of my recruiting process for SDSU. When I’m looking to bring a goalkeeper into our program, I need to see how he plays with his feet.

Nate Abaurrea: Now is that something that you feel can come from a player having a “hybrid” background, growing up playing both as a goalkeeper and as an outfield player? Obviously when a goalkeeper is coming to SDSU to play D1 NCAA Soccer, likely with aspirations to go even further, they need to specialize in the position. There’s no more “hybrid” at that point. But can knowing that a particular goalkeeper is experienced in the field be something that helps you in the recruiting and developing process?

Matt Hall: Absolutely. And in going back to the Latin American goalkeeping culture we were touching on earlier, this has been an area where historically it has been a little different. I know so many Latin American goalkeepers who spent so much time in their upbringing playing outside of regimented training. They were playing pick up games all the time, and when you play pick up games, sometimes you’re not in goal.

I’m grateful for how I was brought up as well in this regard. My club would play thirty minutes of possession to start every practice. I wasn’t a keeper for those thirty minutes. I was just a guy playing possession. That’s how I got good with my feet.

(Stay tuned for the third and final part of our Goalkeeper Special with Matt Hall, featuring a look at the pros and cons of young keepers idolizing German sensation Manuel Nuer, and what it means to be a part of the Goalkeepers’ Union.)

Hailing from Watsonville, California, Nate Abaurrea is a writer and broadcaster specializing in coverage of the beautiful game on both sides of the USA-Mexico border. In addition to the #SNPod, Abaurrea's voice can be heard calling Liga MX matches in English for Club Tijuana, USL-PDL action with So Cal Surf, and the MASL with the San Diego Sockers. He also loves wine. And tacos.
Newer Post
Episode 19 – Peter Wilt on NASL in San Diego
Older Post
CCA Wins San Diego CIF Division 1 Boy’s Soccer Championships