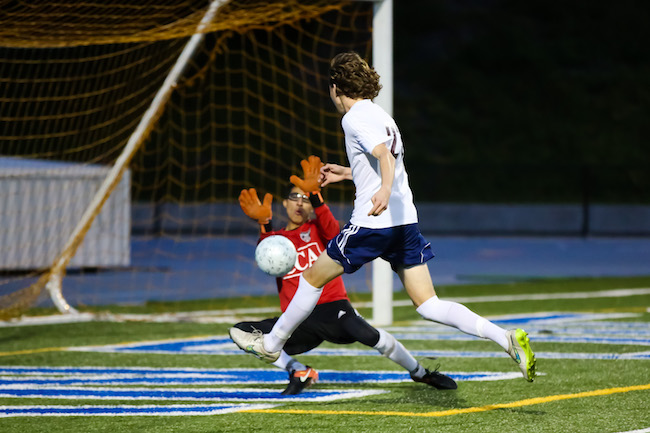 On the afternoon of Saturday March 4th at the Mesa College Stadium in Kearny Mesa, two San Diego boys’ soccer powerhouses faced off in the CIF Division One championship match.

Canyon Crest Academy (CCA), coached by Tom Lockhart, came into the match as the #3 seed after defeating #2 seed San Marcos High School 2-1 in a tight semi-final match on February 28.

CCA opened up scoring in the first half on a goal by Evan Shapiro.

Scripps Ranch equalized in the second half with a breakaway goal from Landon Graham, fed by the long pass from his teammate Tyler Molenaar.

As full-time approached, the already-intense game became even more fast-paced and physical with box-to-box action. With golden-goal overtime looming, CCA’s Bennett Williams placed a throw-in deep into the Scripps Ranch 18-yard box, and Chris DePetro eventually left his feet to jab the ball into the goal at the far post.

Coach Lockhart remarked on the game and his team, “It was a great game to be a part of.  I knew at the beginning of the season that this team was special.  We had the talent, work ethic and unity that could lead us to greatness.”