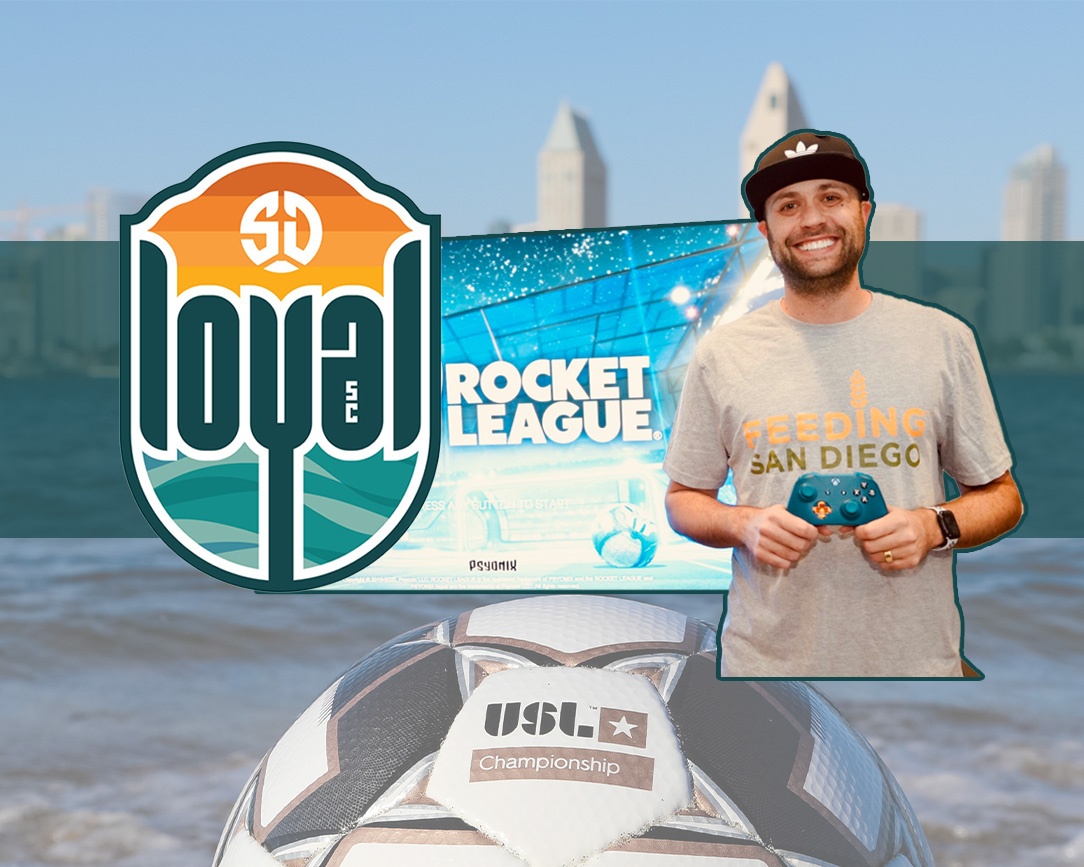 San Diego Loyal’s Squad is ready for the USL Rocket League eCup: TUNE IN ON ESPN3

I spoke with Vassiliadis via social-distancing FaceTime. We talked all about the eCup — plus what he could share about the USL 2020 season.

First some basics, if you don’t know about Rocket League (but should)

Rocket League is a soccer video game. (It started in San Diego, by the way.) Unlike EA Sports FIFA, Rocket League can be played “cross-platform.” For example, someone playing on an XBOX can compete against someone on a PC or a PlayStation. Instead of playing with human soccer players, however, Rocket League is played with Hot Wheels type vehicles in all sorts of arenas. If you haven’t played it yet, what are you waiting for? It’s a blast.

Vassiliadis described, “The whole league and all of the teams wanted to create something fun. We want to engage with our community and our fans. Plus, we wanted to help people who need it. Rocket League is a blast. I’m a FIFA guy, personally. But lately, I’ve been playing a lot more Rocket League, and I love it.”

Vassiliadis plays on a PC setup with an XBOX controller. He explained how the USL eCup will be run:

“I was hoping that the games would be 3v3. We have a 3-man team, and Rocket League is so much more fun when you have a team. But the league was worried about player availability all at the same time, so they decided to make the games 1v1. It’s a totally different playing style, but I’ve been practicing a lot. I have a practice session tonight, in fact, with my brother-in-law. And [laughing] I have a room set up in my house that’s pretty sound-proof, so I don’t bug my wife with the late-night gaming.”

Best two out of three

The 32 USL Rocket League Tournament will start on March 31 and continue through April 24. Each match will be streamed on Twitch. Here Is SD Loyal’s 3 Group Stage matches (vs Phoenix, Philly, and Toronto). We currently do not have a representative for SD Loyal but I assume the announcement will be made soon. I will post any information I find out about the tournament and will be posting links and results of the matches. Stay tuned… #SDLoyal #SDNation #Loyaltothesoil #Team1 #Soccer #Sports #USL #USLChampionship #TBT #Follow #Like4like #Love #Fun #Adidas #Futbol #Football #Happy #Friends #Instagood #cute

Vassiliadis explained how the group rounds will be played: “I have my first games on Wednesday against Phoenix Rising. I don’t know who’s playing for them. It would be good to know who’s playing [sly chuckle]. I may look up some of their streams to see how they play! I will play three five-minute 1v1 games. It will be best two-out-of-three to see who wins that day. Once I start those games on Wednesday, we aren’t allowed to switch players. Elijah and Irvin can play on other days, if we decide that will be best. But once I start playing those 5-minute games, we can’t switch players for those games.”

I asked about the charitable component of the eCup. Vassiliadis eagerly answered, “Yeah, that part’s great. We want to help the community and people who really need it. So we are teaming up with Feeding San Diego. When anyone watches a stream [on Twitch.tv], there will be a button there to donate. The club is going to match donations. Up to $2500! That number may even go higher. We’re talking about it, but I can’t say for sure yet. But at the very least, the club is going to match every donation, dollar for dollar, up to at least $2500. There will be a button to donate on the live stream. And every tweet and social media post we put out will have an easy way to donate to Feeding San Diego.”

What happens after the group rounds?

I asked, “What happens after the group round games?”
“We move on to knock-out rounds. The top two teams in our group will move on. We really want to move on and go far so that we can get as many people watching our stream and donating to Feeding San Diego.”

Is your internet connection solid?

Nobody likes to see a lagging stream. I asked about his internet connection. With another laugh (the guy is always smiling!), he said, “Oh, no worries there! I have fiber. Nine hundred megabit uploads. I’ll be able to handle the stream no problem! The other guys have great internet, too.”

What vehicle do you use?

There are a lot of choices when it comes to Rocket League cars. I asked his favorite. “There’s a van I really like. It looks like an 80’s ‘Mystery Machine’ band van. I think I’m going to use that one. But the 1v1 game is so different. I may change my mind after practicing 1v1.”

How’s the rest of the team?

“I had the team over for a dinner a while back, and Elijah [Martin] is, by far, the best gamer. He’s insane. I won’t be surprised if he jumps in to play a few games. Irvin is ready to roll, too. The whole team is solid.”

Some extremely reliable and fact-filled objective Power Rankings were released recently that have San Diego leading the world:

Laughing as I brought up the Power Rankings, he said, “Yeah, that was pretty awesome. I don’t know about that, but we’ll see.”

Because I had the chairman of SD Loyal on FaceTime, I couldn’t just talk about video games! What does he think about the 2020 USL season while we are in the midst of this COVID-19 pandemic?

“This I can tell you. I was in a conference call recently with all of the USL clubs. Plus we had a doctor from Johns Hopkins. He owns the San Antonio Spurs and the San Antonio USL team, and he knows his stuff. He explained to us that this virus is very predictable. We know what it is going to do. He’s been watching all the data, and he is very confident that we will get through this. There WILL BE [emphasis his] a 2020 USL Season and a champion. It may be a modified season. We’ll see. But there will be a 2020 season with a champion at the end. And, of course, I hope it’s San Diego Loyal!”

Thank you, Andrew Vassiliadis, for your time today, and good luck in your games on Wednesday! We will be watching!

Tune into Twitch.TV on Wednesday at 11am Pacific to see SD Loyal vs Phoenix Rising.