The Turf Controversy over the Women’s World Cup continues

Women’s soccer still struggles to have the same respect and recognition that the men’s game has, and this decision to play the entire tournament on turf was just one more insult to female players. 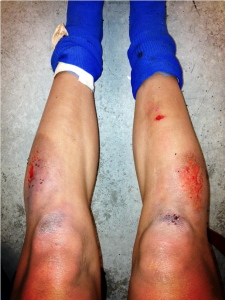 Leroux showing what turf can do to your legs

[quote_box_right]”I’m not going to dwell on this, but I’m also not going to drop it, because it needs to be said,” U.S. midfielder Megan Rapinoe wrote last month for The Players’ Tribune. “This will be the first global football tournament played entirely on artificial turf. FIFA made a $338 million profit on the 2014 Men’s World Cup. To say that it’s not logistically possible to install real grass at all the stadiums is not acceptable, in my opinion. We have played on grass all our lives. Now we’re going to compete at the highest level on a different surface. I think it has a lot of implications.”[/quote_box_right]

It is a matter of gender discrimination because a men’s competition of this level would never be played on turf. I’m sure if it was a Men’s World Cup in Canada, FIFA would take the time, money and effort to make the best possible surface, no matter what they had to do to change all of the fields. However, for the women, they are just doing whatever is easiest and most convenient for them.

This affects the way the players will perform as well as injuries. Sydney Leroux posted a picture of her legs after playing on turf field, and there is no argument that could prove her wrong. This definitely makes players much more prone to injuries. Some of U.S. players are planning on posting pictures throughout the World Cup of how their body looks like after playing on turf.

Not only is the surface of turf more rough and rugged than grass, there is also the issue of what’s underneath the turf field, since grass is way softer and cushioned.

FIFA argued saying that all of the teams knew this was going to happen when Canada was picked to be the host of the 2015 World Cup years ago, as most of the infrastructure there have turf fields because of the climate. Also, other sports teams share the same stadiums, and for them turf or grass do not make any difference. 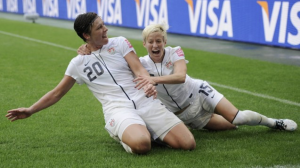 What is even worse is that one of the stadiums that will be used, Moncton Stadium, actually had a grass field until last year, when it got switched to turf because of the World Cup. That did cost $1.5 million, and even though it met all the FIFA requirements, it did ruin it for sports like Paralympic track and field. So the city of Moncton had to spend another $500,000 to get a grass field next to the stadium.

FIFA, however, said they wanted all the games played on the same type of surface, and since the majority of the stadiums had turf fields already, this was their choice for the entire competition.

“As has already been explained, this is not a question of money, or of differences between men’s and women’s events,” FIFA general secretary Jerome Valcke said last fall, “but it is a matter of the natural conditions in Canada: We want to guarantee consistent top-level playing conditions for all 24 teams during the event, both in the official stadiums and at the training sites. This has been the sole reason behind the decision to play on artificial turf from day one.”

This will all serve as a reminder of the gap that still exists between men and women in professional sport.

The only one thing comforting younger players who will still be playing 4 years from now, is that the next World Cup in France will sure have some nice, soft and cushioned grass.