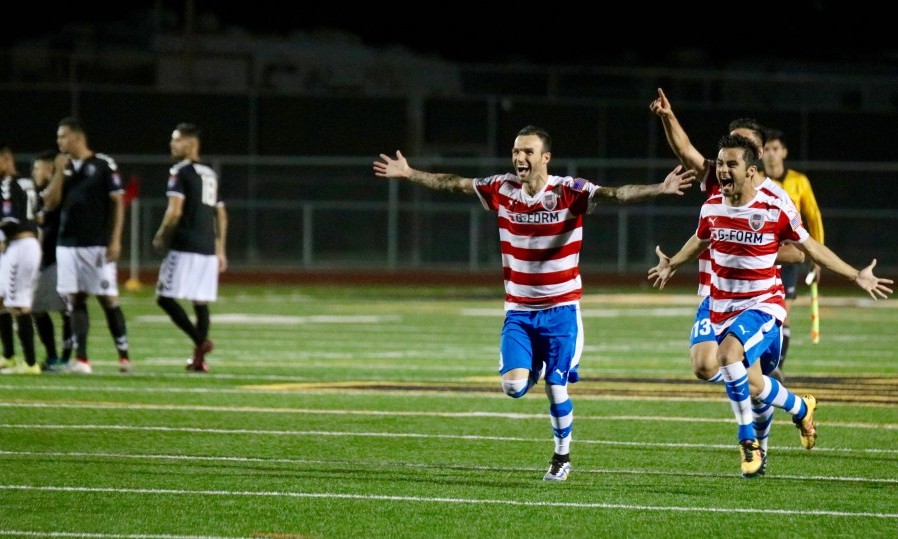 San Diego has recently come to the forefront of the national professional soccer discussion. There has been talk about bringing an MLS franchise to San Diego in recent weeks. However, Albion Pros are already in San Diego for all to enjoy. Saturday night marked the first playoff-ever game for the undefeated expansion team in the National Premier Soccer League. Albion Pros is one of only three teams in a league of 82 with an undefeated record.

On Saturday July 9, that record was pushed to the limit by a feisty and tenacious SoCal SC team, in a match that ended with Albion Pros prevailing 3-1 from penalty kicks. Haitian goalkeeper Jean Antoine was the hero on the night by saving three penalties. He also made 7 crucial, game saving interventions during the 120 minutes of play. His reputation as one of the top, if not the top, goalkeepers in country was only enhanced by his performance in the inaugural playoff game.

Controversy, frustration, heartbreak, red cards and last-minute goals punctuated the previous two meetings between SoCal SC and Albion Pros. This game was no different, except the stakes were much higher. Albion Pros looked to keep the undefeated season alive, and continue the quest for the National Championship. Meanwhile SoCal SC looked to prove spoiler and continue their own remarkable expansion season to the next round of playoffs. In the end, Albion Pros proved their quality and earned an extremely hard-fought win in penalties.

The first half started well for Albion Pros as they looked to pressure SoCal high up the field and win the midfield battle. Then in the 6th minute, the first chance opened for Albion Pros captain Luke Staats as a rebound from a cross fell to his feet at the edge of the box. He smashed a first time shot that skimmed inches wide of the target.

Albion Pros started to turn the screw with Tre Hayes looking the most likely to open the scoring. Unfortunately he could not get his name on the scoresheet despite a bevy of half chances directed towards goal. Raymundo Reza then came closest in the 30th min with a bending shot from the left edge of the 18-yard box that sailed inches wide of the far post. Albion Pros continued to dictate the tempo of play and had a handful of chances before the end of the half, but no one could find the critical opening. SoCal SC were on their heels most of the first half, only getting their first chance in the 38th minute from a designed corner that Staats eventually cleared.

The start of second half was a different story for both teams. SoCal SC looked refreshed after the break, having weathered the storm of Albion’s attack. SoCal earned a couple of early corner kicks that forced Albion Pros goalkeeper Jean Antoine into some well-timed punched clearances. The resulting rebounds fell to ambitious SoCal players who tried their luck from long distance. Both times, affectionately named “Super Jean,” sprung to action to tip the dipping shots just over his crossbar.

A few minutes later, he was called into action again as he had to get his fingertips to a curling effort that was surely going into the top right corner. The crowd gasped at the shot, only to cheer vehemently when the ball went out-of-bounds past his goal. In the 62nd minute SoCal shocked San Diego. SoCal’s Max Rico rose highest from Bryan Guzman’s corner kick cross to head in a goal at the near post, his second goal against Albion Pros this season. 1-0 for SoCal SC as a stunned, anxious San Diego crowd could only watch in disbelief.

Attacking trident Hayes, David Luquen and Matt Clare needed to find an opening to keep Albion Pros’ dream season alive. A few half chances for either all went wide of the mark, so it was time to shake things up for Albion Pros head coach Ziggy Korytoski. Off went Hayes and Luquen. On came Brazilian Douglas Andrade and Homegrown product Oscar Ortega. Both would go on to have significant impacts in the game.

In the 82nd minute, Andrade raced between two defenders for a ball lofted over the top of the defense. The SoCal goalkeeper came out to head the ball as he was on the border of his penalty area, but there was a slight collision since Andrade got to the ball milliseconds before the onrushing goalie. The keeper was able to keep his balance, but his rebound fell to the predatory Matt Clare. After weathering the subsequent challenge from the keeper, Clare found himself near the corner kick area with the ball and the goalie away from his unprotected goal. Clare launched a high bending shot that a backpedaling defender could only deflect into his own net. Similar to scoring a “Gol Olimpico” Clare, and the pro-Albion crowd erupted with joy and relief! Albion Pros 1-1 SoCal SC.

Both teams then searched for the game winner, launching counter attack after counter attack at each other. Neither team was able to break the deadlock so the match went to extra time. The first period of extra time did not produce much goalmouth excitement since both teams focused on not conceding another goal. However, there was one notable moment. Albion Pros midfielder Luis Cardona, who had dictated the passing rhythm of the midfield, was shown his second yellow for a head to head collision with a SoCal SC midfielder. Play was momentarily stopped as both players went down injured, but the referee then showed Cardona marching orders. Albion Pros would have to play the final 15 minutes of extra time with only 10 men.

SoCal SC looked to pounce on the opportunity of having a man advantage in the second period. In the 108’ minute, Albion Pros defender Ricky McKenzie, a standout performer all season, fortuitously headed a SoCal shot off his goal line from a near angle. SoCal could sense their advantage was starting to pay dividends. It only got better for SoCal in the 115th minute. Albion’s Ortega was shown a straight red card for a late challenge on the Achilles of a sliding SoCal defender. Albion Pros were down to 9 men with 5+ minutes to go in extra time and a confident SoCal team surging towards goal to find the winner. However, SoCal did not count on the imperious Jean Antoine having the game of his life.

Three times in the last five minutes SoCal forwards forced Antoine to make outstanding saves, and three times Jean Antoine was up to the task. The most dangerous shot being a knuckling shot that Antoine made a reactionary save to his left to force the ball just beyond his post for a corner. Then the final whistle blew.

The match was going to penalties and a betting man would have bet on Jean Antoine making at least one more vital save to lead his team to victory. No one could have predicted that “Super Jean” would save three of the four SoCal SC penalty kicks. Albion Pros confidently dispatched their three shots into the back of the SoCal net, believing that they had the best penalty saving goalkeeper in the nation. 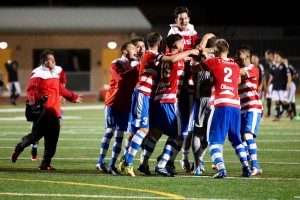 To watch highlights of the game here.

With the win, Albion Pros will host the National Premier Soccer League West Region Semifinal on Saturday July 16th at Mission Bay High School Stadium. The game is scheduled for a 7pm kickoff. It’s a great way to watch the organic growth of professional soccer in San Diego!