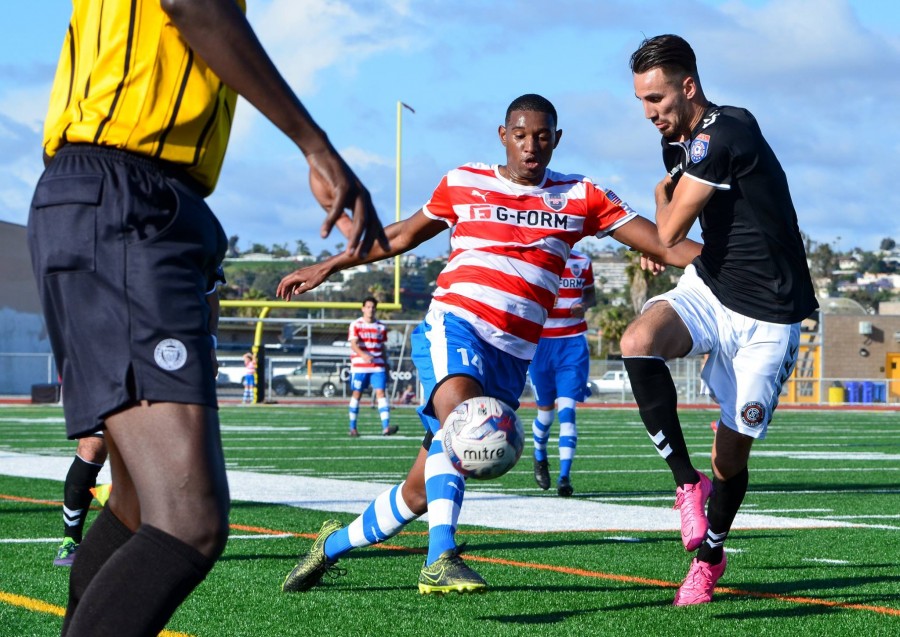 On Saturday, San Diego Albion Pros hosted SoCal SC in a National Premier Soccer League game with the chance to move 9 points clear atop the Southwest Conference. Neither team could get their way and had to settle for a point apiece.

With the draw, Albion extends their lead at the top of the Southwest Conference to 7 points. Meanwhile SoCal earns a valuable point on the road in hopes of claiming a playoff spot at the end of the season after the 1-1 draw. Albion Pros remain undefeated in NPSL play through the first half of the season.

The match was a lively affair with plenty of action, controversy and talking points. The first half started well for Albion Pros as they maintained much of the possession in the opening quarter of the hour. Both teams traded early half chances but nothing too troubling.

The first real action came when Luis Cardona was issued a yellow card in the 17th minute. SoCal SC had their first real opportunity to test goalkeeper Robby Gogatz with regular starter Jean Antoine suspended. Gogatz did well to claim the cross and settle the Pros into their rhythm.

A few short passes later, David Luquen combined with Oscar Ortega to spring himself into a 1v1 situation, but could only shoot straight at the goalkeeper. SoCal SC looked to counter early and often but was repeatedly judged to be offside.

Fans boisterously voiced their displeasure at the referees, which would go on to be a motif for the game on both sides. The first true controversial call would be to not call a handball in the box following a Kainoa Owens header (pictured below) from a corner kick. 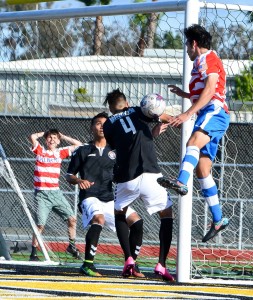 Minutes later, the crowd went wild as Felipe Liborio headed a brilliant cross in from Luquen at the back post. However, the assistant referee on the opposite side of the play called a foul for push in the back by Tre Hayes. The game remained 0-0 at the half.

The second half would be just as controversial for the officiating staff. The players went about their business trying to claim an important first goal of the match. Albion Pros should have had their first when Tre Hayes played in a brilliant cross to NPSL National Player of the Week Matt Clare near the penalty spot in the 48th min. Clare made a quick cut to his favorite right foot and fired his shot just wide with the goal at his mercy.

Then both teams traded counter attacks until a 57th minute corner kick for Albion Pros. SoCal SC did well to clear the cross to their man outside of the box. Cardona then lunged to break up the ensuing counter attack but caught the SoCal SC midfielder with a slightly late challenge. The referee initially showed a yellow card to substitute Ray Reza for the challenge. After a brief meeting with his assistants it was deemed that Cardona should’ve earned the yellow card instead. Therefore, Cardona was issued a second yellow and subsequent red card despite his protests and the confusion by the officiating staff. Albion Pros would have to play the final half hour with 10 men.

With Albion Pros down to 10 men, SoCal could sense that they had an opportunity to steal points on the road. They looked to overload the Pros with penetrating through balls, but were repeatedly caught offside by the organized Albion defense.

The script would flip in the 70th minute when SoCal’s Forward Bryan Guzman would be sent off for severe profanity against Tre Hayes. Both teams would be reduced to 10 men for the final 20 min. In the 80th minute it seemed as though Albion Pros would finally clinch the game winner.

Substitute Douglas Andrade latched on to a Luquen through ball and calmly slotted it past the keeper from a wide angle.

SoCal kept their hopes up and continued to search for an equalizer. They would finally get it in the 90’+5’ when they intercepted an under hit pass in the midfield and raced down the right side of the field. The right midfielder surged down the sideline and found SoCal forward Andy Contreras all alone in the box to turn in his ground cross. The crowd was shocked as they felt the home team had done enough to claim the 3 points at home. It ended 1-1 with both teams earning a point despite being reduced to 10 men and controversial officiating.

Albion Pros return to action vs Frontera United on Saturday May 14th for a friendly match.

All Photos Courtesy of Eddie Trujillo