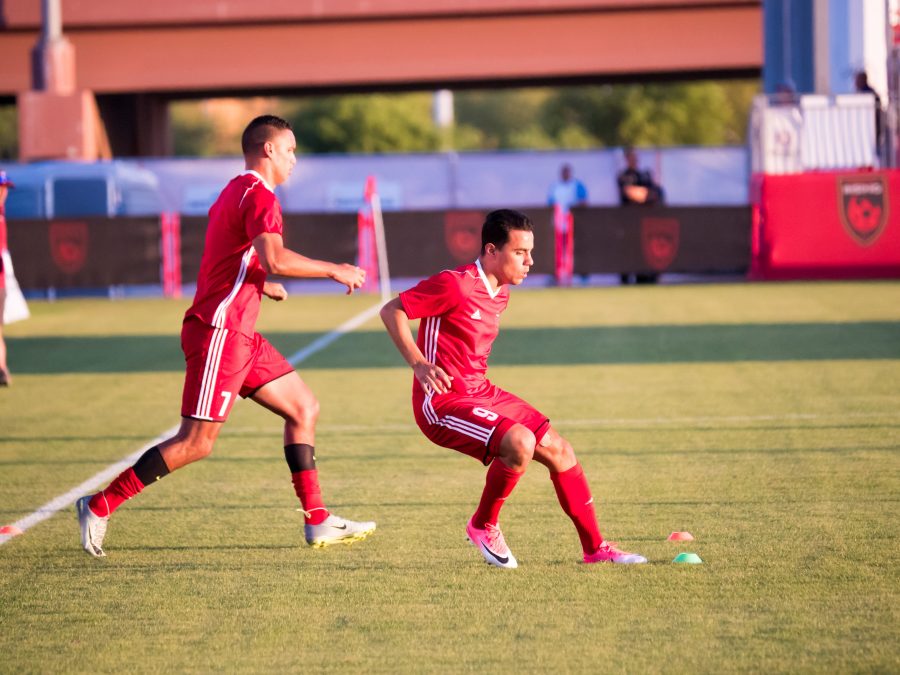 Fresh off a convincing US Open Cup Second-Round victory at PDL side Fresno Fuego, Phoenix Rising FC travels now to undefeated, USL-leading San Antonio FC. The task waiting in the Alamo City was already as tall as Texas cotton, but with the recent loss of integral starters Luke Rooney and Alessandro Riggi to injury, Phoenix will need its most complete effort of the young season to leave Toyota Field with a point.

Rising FC announced on Monday that the non-contact right knee injuries sustained by Rooney and Riggi last Saturday against OKC would end Rooney’s season, and keep Riggi out for three to five weeks. Rooney leads the team with three goals, and comes in third with six chances created. Riggi has one goal and five chances.

Accurately predicting the Phoenix lineup in the wake of these injuries will prove difficult, though the substitutions against OKC and subsequent formation in Fresno offer clues.

Former San Antonio FC forward Jason Johnson slotted into the lineup for Riggi on Saturday, and quickly showed his readiness for the job, scoring a goal in the 50th minute, and making the run deep into second-half stoppage time which would set up Shaun Wright-Phillips’ winner. Miguel Timm made his 2017 debut in relief of Rooney, and ably controlled the midfield for Phoenix, but did not figure into the offense.

Johnson, and Romilio Hernandez started in the midfield at Fresno, alongside veteran Blair Gavin. Mike Seth was partnered with Matthew Hurlow-Paonessa and Eric Avila in attack.

All of that is to say this: Phoenix did well to score two goals against a struggling OKC side at home, but taking points from San Antonio FC will take some creativity.

SAFC has outscored opponents 19-4 over nine matches. In five matches at Toyota Field, San Antonio has logged four shutouts, and been scored upon only once, owing in no small part to the midfield domination of Pecka, and the constant threat of goals from Billy Forbes, Cesar Elizondo, and Rafa Castillo.

There is a caveat, however. Seattle Sounders 2 recently went into San Antonio and held the home side to a scoreless draw. Last month in Tukwila, Washington, S2 became the first and only team this season to score two goals against SAFC. Seattle attacked from the wings and created chances outside the box in that match, which bodes well for Phoenix, who still have Shaun Wright-Phillips to deploy on the right, and Johnson – or Seth – from the left. SWP rested on Wednesday during Open Cup action.

San Antonio played its own Open Cup match on Wednesday, a 2-1 victory at the Houston Dutch Lions. Castillo, Maxi Rodriguez, and Ben Newnam were the only first-team regulars to start the match, so the home side too will have its main threats fresh for the visit from Phoenix.

Unspoken by the club since Coach Rick Schantz’s post-game comments two weeks ago is the status of Didier Drogba. Tomorrow’s match in San Antonio has been mentioned as a possible date for the Ivorian player/owner to make his debut on the pitch. San Antonio FC has been drawing good crowds to Toyota Field, but should have no trouble attracting a noisy sellout should Drogba be announced as a member of Rising’s traveling squad.

The match kicks off at 5:30pm PDT Saturday. It will be broadcast in the Phoenix area by YurView Arizona, and streamed for free at the Match Center on USLSoccer.com.