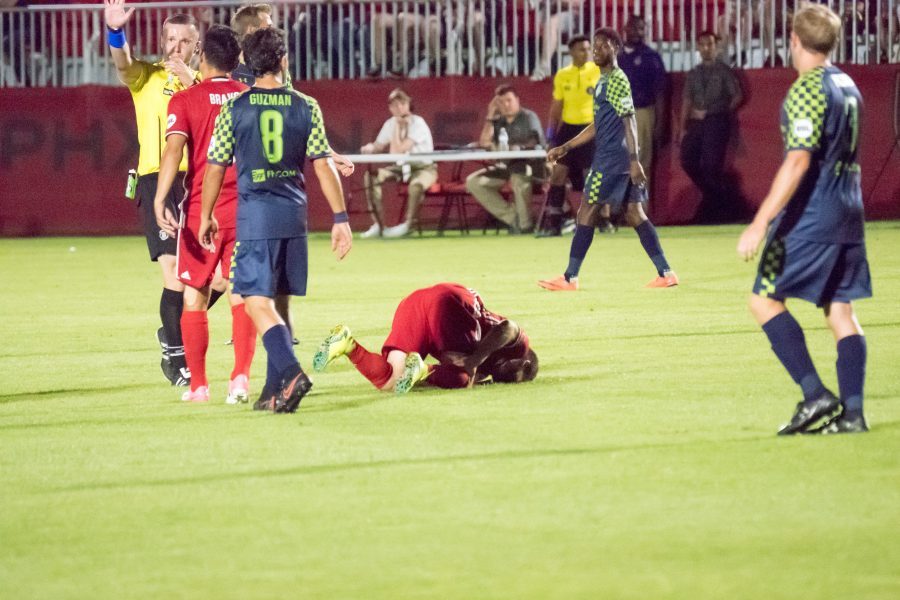 It came down to the wire and possibly cost two important players, but Phoenix Rising FC got back in the win column Saturday night in front of 6,291 at Phoenix Rising Soccer Complex, defeating OKC Energy FC 2-1.

Phoenix would dominate possession in the first half, and pressured relentlessly, but was unable to string together many solid chances. OKC was likewise making only sloppy use of its opportunities.

A mistake in the 5th minute reeked of the ills of last week, however, when Jordan Stewart’s throw-in sailed past Victor Vasquez and into the Phoenix penalty area. Rising goalkeeper Josh Cohen was just able to safely find an outlet wide, and the stadium exhaled together.

In the 8th, Shaun Wright-Phillips found Omar Bravo in the OKC box, but chipped his pass just long.

In the 18th, Bravo showed remarkable pace to chase a ball into the corner, where twice he eluded a defender before controlling the ball and passing back. The resulting through ball into the box was too strong and OKC ‘keeper Cody Laurendi recovered.

In the 26th, the Phoenix backline banged the ball around a bit, before finally Peter Ramage took one touch too many and had his long pass attempt blocked by an OKC player. A retreating Wright-Phillips was able to block the subsequent shot and avert the danger.

A moment later, disaster struck when midfielders Luke Rooney and Alessandro Riggi each left the game in the space of a few minutes with non-contact injuries. The club announced each as “right knee” injuries, but did not elaborate on the seriousness. After the match, both players were seen in knee braces, with Riggi additionally requiring crutches. Interim head coach Rick Schantz told media after the match that, “they’re going to get a scan probably and we’ll know about it Monday or Tuesday.”

Phoenix continued to press though, and indeed even after the substitutions of Miguel Timm and Jason Johnson, the game was played mostly on the OKC side of the field. “We did a lot right in the first half and we made a few little adjustments and did even better in the second half,” said Cohen after the match.

In the second half, Johnson made his presence felt when he made a run into the OKC box, beat one defender to create space, and slotted deftly to the lower left corner of Laurendi’s net, giving Phoenix the lead for the first time in 140 minutes of play.

Wright-Phillips gave the home fans a thrill when, in the 59th, he broke through several OKC defenders and into the box before Laurendi was finally able to cover the ball.

Moments later, the Energy had its best chance to equalize when a long throw from the sideline found the foot of Miguel Gonzalez. The third-year pro out of Seattle let fly from about 13 yards and forced an acrobatic save from Cohen. In the 75th, Cohen would be forced to deny Gonzalez again.

A few minutes later it was Rising’s chance to create excitement, when Kyle Hyland battled Cortez on the sideline, and actually picked up the Phoenix striker before being called for the foul. A subsequent corner kick led to a Cortez header that was saved by Laurendi.

The Firebirds continued to pressure, and in the 88th, Bravo was taken down just outside the box, and his curling free kick was just wide of Laurendi’s post.

Hyland would redeem himself in stoppage time when his penalty equalized the match after a controversial call. “It was a little bit of a heartbreak, you know,” Cohen said. “We work hard, solid defense from…. starting with our forwards, our midfield, our defenders and everyone’s just working, tucking in, and winning the ball, and we’ve earned 90 minutes of shutout and then to get that right at the end…”

Much to the delight of fans, their club would not be held down, and a wonderful run from Jason Johnson and setup by Cortez was finished off by a fantastic low strike from Wright-Phillips, the Englishman’s first goal with Phoenix.

“We all fight for each other and I think that’s the main thing. It’s not just about me, it’s just about the team and the fans and what the club is trying to build here and it’s going in the right direction.”