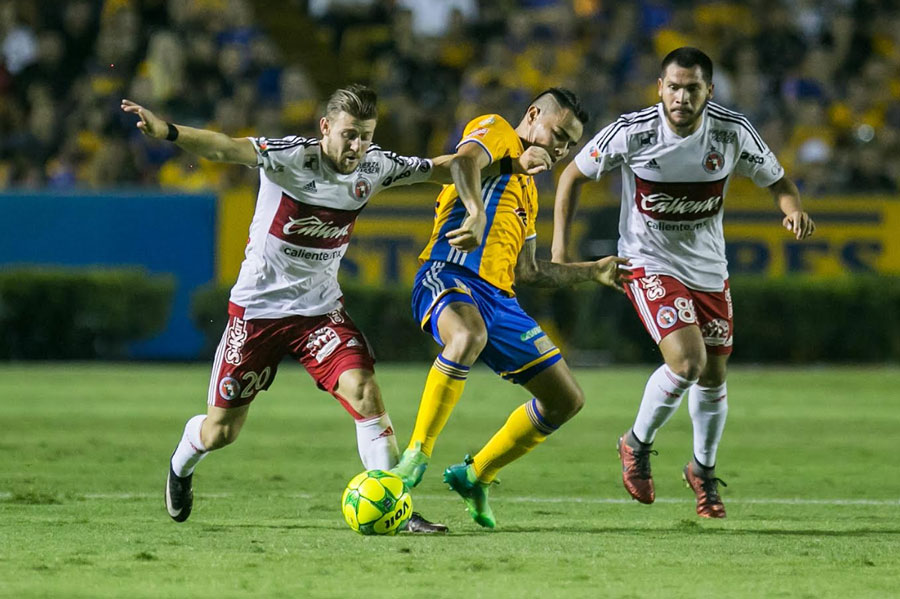 Thursday night’s 2-0 loss for Tijuana could easily be defined by a handful of post-game stats.

During the first leg of the Liga MX semifinal, Xolos maintained 35% possession of the ball in comparison to Tigres’ 65%. While Tijuana collected a meager tally of two shots over 90 minutes, the opposition amassed an impressive total of 16.

Any soccer fan could easily tell that Xolos manager Miguel “Piojo” Herrera was parking the bus, and it at first looked like it could work in the coach’s favor.

Tijuana was defensively brilliant during the early stages of the match, but during the 21st minute, captain Juan Carlos Valenzuela suffered an injury. With no defensive options on the bench, Herrera was forced to substitute out the central defender and drop defensive midfielder Guido Rodriguez into the backline.

Slowly but surely, the home side pressured the weakened Xolos roster and gained two vital goals late into the first half. With a lead in hand, Tigres sat further back in the second half and conservatively played their way toward the eventual 2-0 win.

Tijuana still has a second leg to play at home this Sunday, but with a two-goal deficit to overcome, things are going to be extremely difficult for Herrera and his men.

As reported in the preview, Herrera indicated on Wednesday night that Joe Corona would be a part of Tijuana’s starting XI. Along with the rest of the announced roster, Xolos were set to field a 5-2-3 formation.

However, on the actual gameday, Herrera later altered his formation. Ahead of the first leg, the manager dropped Corona and replaced him with Paul Arriola, therefore changing the formation to a 5-3-2. It was a risk from Herrera, and it’s fair to question why he dropped one of Xolos’ most important and influential members of the starting XI.

Was it a type of mind-game with Tigres manager Ricardo “Tuca” Ferretti? Despite their embrace before Thursday’s match, both have been throwing hostile comments at each other during the past few days.

Or, was Corona tired from the travel? Reports emerged after the game that the midfielder was drained before the match, but that in itself feels like a strange occurrence for a vital clash.

The big question now is if the American will get the start in the upcoming second leg.

2. Herrera’s defensive gameplan was ruined by an injury

Corona or not, parking the bus almost worked for Xolos. Almost.

Tigres struggled during the early moments of the match, and with plenty of men behind the ball for Tijuana, there was the slightest chance of a miracle for Herrera.

Yet, once the injured Valenzuela was brought out during the 21st minute, things quickly started to fall apart. Tigres took advantage of the crippled backline, and despite Gibran Lajud’s highlight-worthy saves, the home side found the back of the net in the 42nd and 45th minute.

Once halftime rolled around, Herrera was in the unenvious position of either pressuring Tigres and allowing space for counters, or continuing to sit back. The manager went with the former rather than the latter, but it wasn’t enough against Tigres’ highly-talented roster.

As mentioned earlier, Xolos finished with two shots and never truly tested goalkeeper Nahuel Guzman. To make matters worse, striker Aviles Hurtado hobbled off the field during the 80th minute after suffering an injury of his own.

3. Can Xolos recover before the weekend?

Following the match, Herrera stated that Valenzuela would be unavailable for the second leg. The coach also mentioned that the status of Michael Orozco and Hurtado were still up in the air.

Orozco has been out for weeks now, but missing either Hurtado or Valenzuela is significant for Xolos. Missing both? That could be near-disastrous.

At the least, Tijuana will need two goals this Sunday. If Tigres find the back of the net once, Xolos would then need to at least score four goals against the current title-holders. This isn’t impossible, but with key players possibly missing, this weekend’s second leg might prove to be a depressing end to not only the season, but also Herrera’s tenure.

With or without a title, all signs point to a move back to Club America for Xolos’ current manager.

Credit must be given to Rodriguez. After initially starting as a defensive midfielder, the 23-year-old later replaced the injured Valenzuela in the center of defense. Although Xolos’ backline expectedly struggled against Tigres, Rodriguez stepped up with several clearances and tackles that helped his side avoid an embarrassing result.

Were it not for the Argentine, and also Lajud, this semifinal series would already be over.