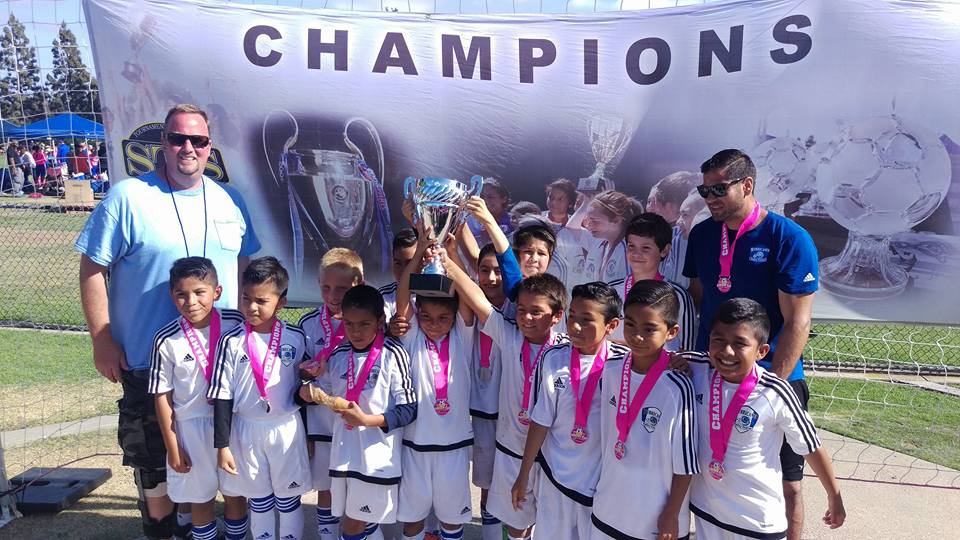 Established in 1980, Valley Center Youth Soccer (VCYS) is a community based non-profit organization located in northern San Diego. Offering competitive and recreational soccer, VCYS believes how the game is played is even more important than winning itself. In a passionate soccer community, VCYS volunteers’ allow the club to offer exceptional coaching at an affordable cost.

A Cal South affiliate member, VCYS serves close to 100 competitive players, ages U7 to U14 and 700 recreational players from 4 to 17 years old, playing on a total of 7 soccer fields.

On their website VCYS states, “A quality organization is measured by its conduct and attitude, both on and off the field.” The thriving soccer league affirms their statement by contributing to the game of soccer with the big picture in mind — education for coaches and parents, promoting team spirit, utilizing technology, and creating a sense of community.

In an exclusive interview with SoccerNation, Andrea Amaro spoke with Dale Blasius who has been involved with VCYS for more than a decade and is the current honorary member at large.

SN: How did you become involved in soccer?

Blasius: I first became involved with AYSO Soccer in San Marcos – my oldest son was 6 and they needed coaches. They were well-organized, and we enjoyed our association with that program. Our family then moved to Valley Center and my wife and I signed up to help wherever we could within VCYS. My first job was field maintenance – trash patrol, assembling goals and painting fields. At that time the Hurricanes had only 2 teams – and VCYS had a great, energetic board that was really fun to be a part of. After coaching recreational soccer for a year, my wife and I initiated a new Hurricane team, and offered to be DOC to help with organization. Over the years the Hurricane organization has grown to 14 teams, and VCYS has continued to grow the recreational soccer program as well. I believe it is still the largest youth sports program in Valley Center.

SN: What would you say helped you grow as a volunteer?

Blasius: My wife and I found that more information was always better – we signed up for extra Cal South classes, including nutrition, keeper training, finishing, and just about any subject that we could attend. We also volunteered to host British soccer coaches in our home — with late night discussions on formations, training, drills and more.

SN: Can you share some of VCYS’s recent team success?

SN: VCYS holds an annual Recreational Tournament… What are some ways VCYS keeps the fun alive in a competitive tournament atmosphere?

Blasius: VCYS’s hold a Spirit Contest during the tournament. Coaches and players go all out – painting their faces and hair, some coaches that work with the younger girls teams wore tutus – overall it is an incredible atmosphere. Some years we also included a ‘kick a thon’ fundraiser, DJ with loud speakers to broadcast between the fields, and even a bounce house. Last year our registrar (Christine) had an idea to let the competitive Hurricane teams set up ‘food tables’ and serve different specialties of foods as a fundraiser. There was everything from bratwurst to tamales, and it was quite successful. Of course, the tournament is very competitive, and sometimes teams that are in last place in league standings muster up their teamwork and win the tournament! It’s a highlight that the recreational coaches and players look forward to participating in.

SN: Does VCYS hold any other events?

Blasius: VCYS also sponsors periodic coaching clinics, as well as specialized keeper classes for the Hurricanes, and has hosted “Finishing Fridays” in which Hurricane coaches will coach recreational kids in defense, shooting, tactics, etc. VCYS is also the umbrella and support for Jag Soccer Camp, an annual camp run by the Valley Center High School varsity team for youth ages 8-15.  With so many varsity coaches and players, the camp attendees receive a beneficial player ratio. The camp has been very successful, with last year’s attendance at 70+ kids. The varsity team volunteers, therefore all camp fees go directly to support soccer at VC High School.

SN: How does VCYS assist players that look to move on to become collegiate and professional players?

Blasius: VCYS works with iSoccerPath – a premier education and evaluation company for families of prospective college student athletes. This partnership provides an affordable program available for all competitive players, to enhance and increase the chances of players getting a college roster spot.

SN: How has technology affected VCYS and youth soccer?

Blasius: Technology has been the biggest improvement for VCYS due to the use of Affinity Sports for online registration and scheduling. Use of their mobile app is rapidly growing. Some of the coaches also use TeamSnap for communication and organization. A few of the older teams – including my high school teams and Hurricane older teams film their games and use HUDL as the editor. We used to film some of the games as young as 11 and 12 years old. We’d hang a sheet on the fence by the field at the end of practice, bring popcorn for the boys, have a small generator and show 10-15 minutes of clips from our recent games.

SN: Are there any famous alumni players from VCYS?

Blasius: Ruben Martinez is well-known in the soccer community here in San Diego, and he was an original/first Hurricane player with VCYS. He returned home and is acting as the Director of Coaching for the Hurricanes and VCYS board member. We have several of our Hurricanes that have gone on to play in college, including Anthony and Alex Cozzi, plus we look forward to seeing this year’s crop of incoming freshman, including Rod Rodriguez and Jiovani Molinero, play at Cal State San Marcos and Palomar respectively.

Blasius: VCYS’s goals continue to be ongoing education for coaches and parents. Great treatment of our players and referees, with zero tolerance for bad behavior exhibited by players, coaches or parents. Our goal is to give the best environment for the players to blossom and improve, learn the game and value sportsmanship and competitiveness.

A seasonal sport that can be played all year long in San Diego, some soccer players and families become so absorbed in the beautiful game they begin to lose the fun aspect of the sport, get burned out, and quit. Clubs like VCYS are staying focus on what the game is all about and not losing the most important part of youth soccer… FUN!