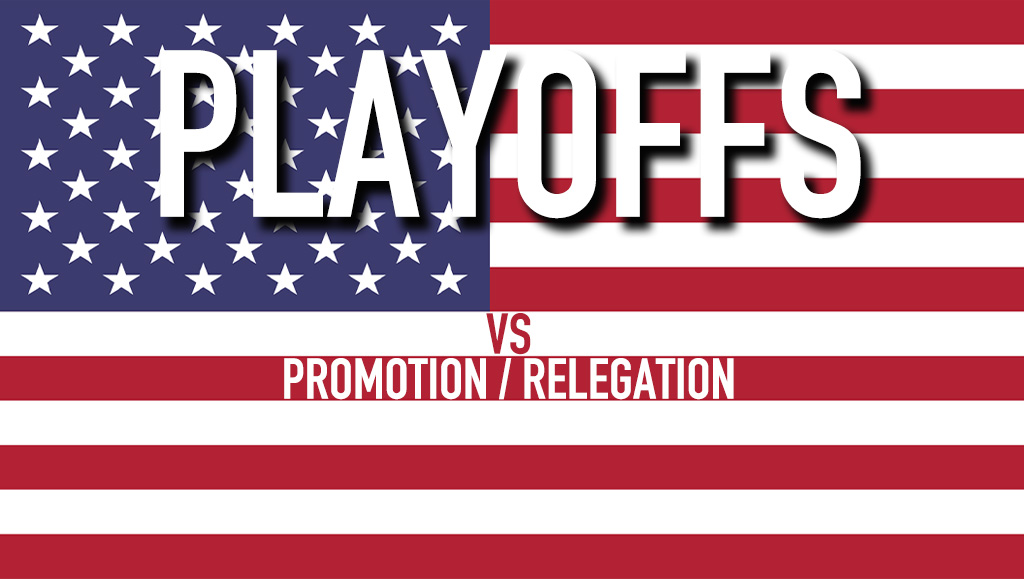 OPINION: Playoffs are American. Promotion Relegation can stay away.

A few months ago, I was meeting our newest team member here at SoccerNation. Richard Nightengale and I sat across the Soccerloco conference table from each other and (duh) started talking soccer. He loves the Wolves of Wolverhampton. I’m Chelsea blue when it comes to English football. So, with relief, we agreed that we could be friends.

This bloke is British. Although he’s been here in the US for a while now, his accent is still going strong. I, on the other hand, am 100% American. As we started talking MLS, that Brit across the table made a bold English prediction.

He stated, as though it was as obvious as the sun rising in the East, “LAFC’s going to win it all. It’s done.” (I bet King George thought the about same way about his military against those pesky treasonous colonists, Richard.)

The thing is, Major League Soccer isn’t the EPL, Liga MX, Budesliga, or Serie A. The regular season doesn’t decide the title. If it did, LAFC would already be MLS Champions. But that’s the way we Americans roll.

Playoffs decide our champions in America. NCAA Football. The National Football League. NCAA Baseball. Major League Baseball. The Stanley Cup. The NBA. March Madness. Does the “best team” with the best record always win? Sometimes, but not always. $^it happens. One unlucky moment in one win-or-go-home playoff game can end a season. And that’s just the way we like it.

So, Richard, do you still know for sure that LAFC is going to win it all? I’m not gonna lie — I’ll be a pretty happy camper if they do. But I know how quickly a playoff run can go sideways and a great team can be left dumbfounded scheduling tee times instead of training sessions.

I say “snob” lovingly, tongue in cheek. For anyone who’s annoyed with me, I love gorgeous European soccer. But it’s not American.

There are a few reasons why I don’t want Promotion / Relegation to come to American soccer. I have already made the first reason crystal clear: Playoffs and championship games are America’s version of promotion/relegation. I think that’s more than good enough. It’s better.

It’s all about the money

My next argument against Promotion / Relegation is the stone cold fact that it’s just not financially smart. MLS teams already have a hard time securing corporate sponsors. Ticket sales, merchandise, and TV deals are main sources of a club’s revenue. Corporate sponsors are another, and it’s already a challenge for an MLS team to sign a multi-year deal with a corporate sponsor.

If a team is constantly in danger of dropping down to a lower league with no nation-wide TV coverage and lower attendance, those corporate sponsors are going to be even harder to secure than they already are.

Soccer doesn’t have commercial breaks every thirty seconds like baseball, basketball, and football. That huge TV ad revenue potential doesn’t exist, so networks don’t pay as much for the TV rights to regular season soccer games.

Eyeballs in the stands to see the ads.

Since TV deals aren’t as big for soccer, money comes in from sponsors who are promised in-person eyeballs at the games to see their ads. I talked to a friend of mine who arranges deals between corporations and professional teams. He asked to stay anonymous, but what he told me makes sense: “It’s all about the bang for the buck. Return on investment. Eyeballs seeing the ads at the venue.” The numbers of eyeballs just aren’t there for soccer (yet!).

Soccer doesn’t have 3-5 games a week like baseball and basketball. Football is an exception, of course, but their attendance numbers are huge.

Who else is not quite prone to math ? #MathIsHard #kpopmemes #IzoneMemes #kpop #izone #math #relatable #memes

Let’s do some math. I’ll keep it simple. Here are average game attendance and total season attendance numbers for American sports. These are the numbers of people with eyeballs at games to see sponsors’ ads:

MLS’s attendance doesn’t even crack 10 million (yet). Even with the HUGE numbers Atlanta United are putting in the stands, MLS is still behind other sports, and most cities only dream of Atlanta-type attendance numbers.

A soccer sponsorship deal for a corporation may be a great deal compared to other sports. But, the company’s ads won’t be seen by nearly as many “eyeballs.”

Add in the constant threat of relegation, and teams that aren’t perpetually in the top half of the standings aren’t going to have a snowball’s chance in the underworld of securing multi-year corporate sponsorships.

Reason 1: Playoffs are awesome and American

Conclusion: Promotion and Relegation should not be a part of American soccer.

What say you, Richard?