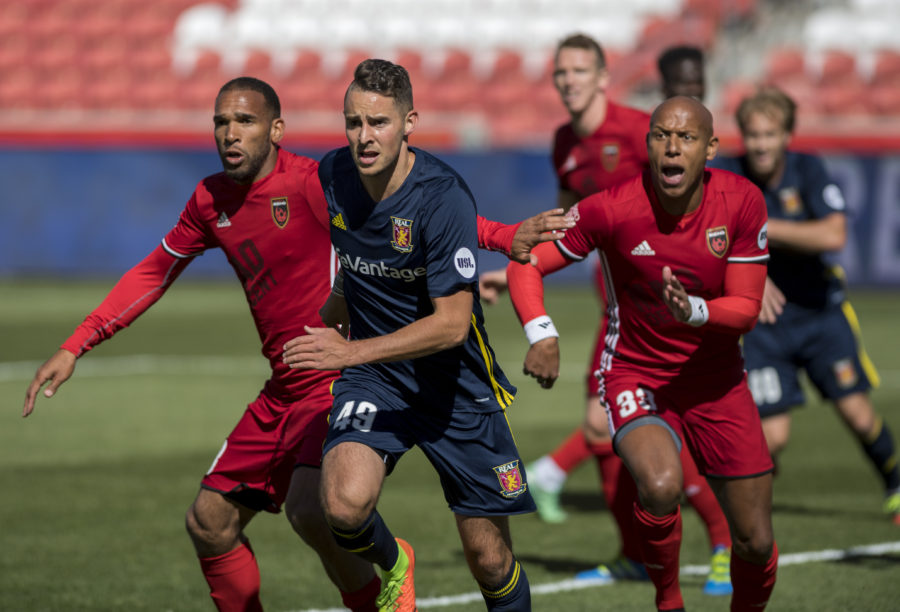 Burned on the right side a week ago in in the season opener, Phoenix Rising FC suffered the same fate Saturday in Sandy, UT, where they had no answer for goals from Chandler Hoffman and Omar Holness in a 2-0 loss to Real Monarchs SLC.

Real dominated possession early, showing plenty of the same offensive aggression that earned them a 2-1 victory in Portland last round. Against Rising FC at Rio Tinto Stadium, Real took 11 shots total, and put six of them on frame.

The home team’s attacking focus was rewarded when, in first-half stoppage time, Chase Minter was taken down in the penalty area by Rising’s A.J. Gray. Hoffman buried the penalty kick to give the Monarchs a 1-0 lead. Minter was a menace on the afternoon, spending most of his time deep in the Phoenix half, and creating two chances in front of goalkeeper Josh Cohen’s net.

Second-half SLC substitute Omar Holness, on loan from parent club Real Salt Lake, took advantage of a spate of ball-watching by the Phoenix defense, roofing a lovely goal in the 76th minute off a pass from Andrew Brody.

It began at midfield, where Phoenix substitute Blair Gavin lost the ball to Brody, who charged toward the Phoenix box, attracting three Rising defenders. When he reached the box, he was the only one who saw Holness arriving near the far post. Matt Watson had given chase for Phoenix, but was a step too late, and Holness finished his shot with authority.

Despite allowing two goals in difficult situations, and being called into action often, Cohen was excellent in the contest. The former Orange County Blues starter finished the match with four saves.

One of the better chances of the afternoon for Phoenix came in the 70th minute, when Shaun Wright-Phillips put in some work to penetrate Real’s box before putting in a dangerous cross that got cleared out.

For the second week in a row, former FC Montreal man Alessandro Riggi was called into the match for Phoenix late, and for the second week in a row, he created a chance for his new side. Finding space at the corner of the penalty area in the 86th minute, he sliced a pass into the six-yard box where an outstretched Wright-Phillips could only redirect the ball over the bar.

A surprising omission from the Phoenix lineup was midfielder Luke Rooney, who slotted as a playmaker throughout 2016, and looked out of sorts last week when paired with Wright-Phillips in the middle.

Overall, the day was dominated by the Monarchs, who controlled possession, shots, and shots on goal. The 2-0 scoreline gives the Utah club its first-ever 2-0-0 start.