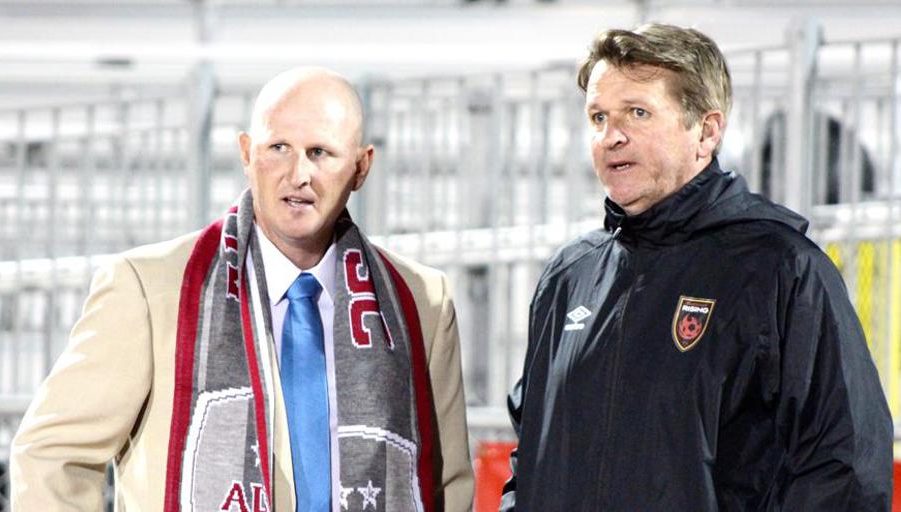 Albion PROS continued their fine start to 2017 with another pre-season win on Saturday night. The San Diego based NPSL side defeated recently rebranded USL club Phoenix Rising FC by a score of 3-1 at Albion’s home of Mission Bay High School. David Luquen was the star of the show, scoring twice for the home side.

It was a night filled with emotion and loaded with some fine soccer stories.

Much of the buzz in the buildup to the weekend affair, which was the first of the Phoenix pre-season slate, centered around recent Phoenix signing Omar Bravo, the Mexican great and all-time leading goalscorer for Chivas of Guadalajara.

The 36-year-old Bravo, who scored 132 goals in a Chivas shirt, was not to play in the match, but his presence was certainly felt. Dozens of fans donning the red and white stripes of the Jalisco giants showed up just to get a glimpse of their hero, with Chivas flags and scarves visible all around the intimate facility. 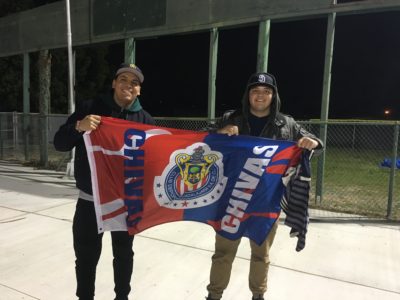 This past Friday, Phoenix also acquired the services of former Manchester City and Chelsea winger Shaun Wright-Phillips. The England World Cup veteran was rumored to be with the team in San Diego, though no official sighting was made. Wright-Phillips and Bravo serve as fine examples of the potency of the new Phoenix ownership group, which acquired the club formerly known as Arizona United in November of 2016.

There was a lovely moment before kickoff, with Albion Manager Ziggy Korytoski joining with Phoenix Manager Frank Yallop (a two-time MLS Cup Champion during his first tenure leading the San Jose Earthquakes) to pay homage to the U.S. Paralympic National Team. The USPNT had a handful of representatives in attendance. 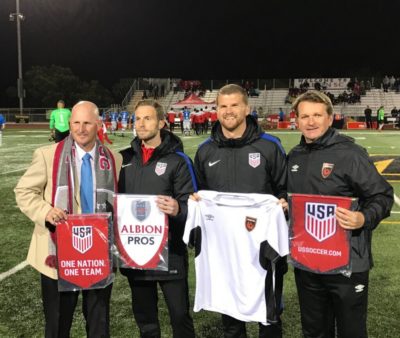 (Both managers pose for a pre-match picture supporting the USPNT)

There was a stirring moment as the teams took to the pitch at Buccaneer Stadium, the Albion players letting out a loud and unmistakable “Oscar” as the final word before breaking their team huddle.

Albion’s Oscar Ortega, who played and assisted a goal in the club’s pre-season opening win vs. East Bay Stompers, is battling health issues, but is firmly planted in the thoughts and prayers of his teammates and Albion family.

Albion supporters group, The Deep End, enacted a massive striped jersey tifo with Ortega’s number 7 that remained draped over a large section of stands just below the group’s bleacher location throughout the entirety of the match.

As fans continued to file in on a cool and breezy night in Pacific Beach, a wild contest quickly kicked into full gear.

David Luquen, who scored a stunning free-kick to give Albion a 3-2 win against East Bay Stompers on February 11th, converted from the spot. Luquen’s attempt from twelve yards out was nearly saved by Phoenix goalkeeper P. Hapley, but it was only parried over the line and into the side netting.

Just four minutes later, Albion Captain Luke Staats was sent off for an aerial, studs out challenge that would have made Rafa Marquez blush.

Staats was incensed, but was immediately told to go to the dressing room by just about all of his teammates as he tried to approach the referee, the Amsterdam native not finding much sympathy from anyone on the field.

Referee Alejandro Mariscal was to firmly hold his place at the center of the drama-filled 81 minutes and change that remained. Both teams could be seen and heard going after the referee through much of the first half, and just seconds before the halftime break, Mariscal whistled for a handball as the Phoenix goalkeeper caught the ball just outside his eighteen.

Up stepped David Luquen, quite possibly the hottest player in the Albion camp at the moment. Luquen proceeded to bend a gorgeous strike, up and over the wall and past the outstretched arms of Hapley, the shot hitting the back of the net and sending the Mission Bay crowd into a frenzy as the halftime whistle sounded moments after the goal celebrations concluded.

Midway through the second half came one of the craziest sequences imaginable, with Mariscal again becoming the center of attention by awarding a penalty to each team in a ninety second span.

In a brief haze of sensational highlight reel material, Albion goalkeeper Jean Antoine saved the initial Phoenix penalty, the ensuing rebound, and caught the eventual deflection off the leg of a charging Albion defender. Mariscal’s whistle blew, and a collective sense of uncertainty fell over the crowded goal mouth. The referee ordered the penalty to be retaken, saying that Antoine was off his line when the first attempt was put on goal.

Pikitis, who did not take the first attempt, calmly slotted his shot into the bottom left corner of the goal, down to Antoine’s right side. Pikitis proceeded to stare right into the eyes of the goalkeeper for a few seconds after an outraged Antoine had tried to play some classic keeper mind games, standing away from the chaos for as long as possible before being loudly ordered by Mariscal to get back in the goal.

With Phoenix playing a man up, the Albion defensive fortitude was put to the test for the remainder of the match. The home side held strong, anchored by the stellar play of the Haitian Sensation in goal. Antoine made eight saves in the second half, and that’s with his double stop of the initial Phoenix penalty not counting in that number.

When the final whistle blew from Mariscal and the two teams exchanged a few handshakes and hugs, the focus of many people, both fans and players, turned to the Phoenix bench where Omar Bravo was gathering his belongings and beginning to make his way back to the dressing room.

Families with small children along with adoring fans in Chivas jerseys swarmed the running track at Mission Bay, Bravo showing his true class and down to earth qualities by signing autographs and taking pictures with every last person that approached him. This included multiple Albion PROS players, notably Jean Antoine and Sergio Ortiz. The respect was clear, and the love was on display. 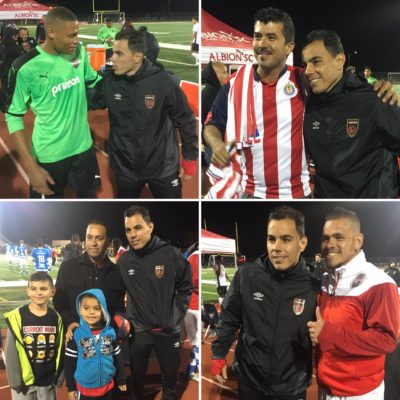 As is custom at Albion matches, Ziggy Korytoski briefly got on the wireless field microphone to say a few words to the supporters as the evening wound to a close. His message was short and sweet, and most of all sincere.

“We love you fans and we love what you do for us, and we all know what tonight was about,” Korytoski said. “This one was for Oscar!”

The Deep End let out one final cheer, as families and friends of players and coaches spilled out onto the pitch and the surrounding track. The lights went down and the book was closed, a 3-1 win for Albion PROS complete with some memorable footballing experiences for all who took part.