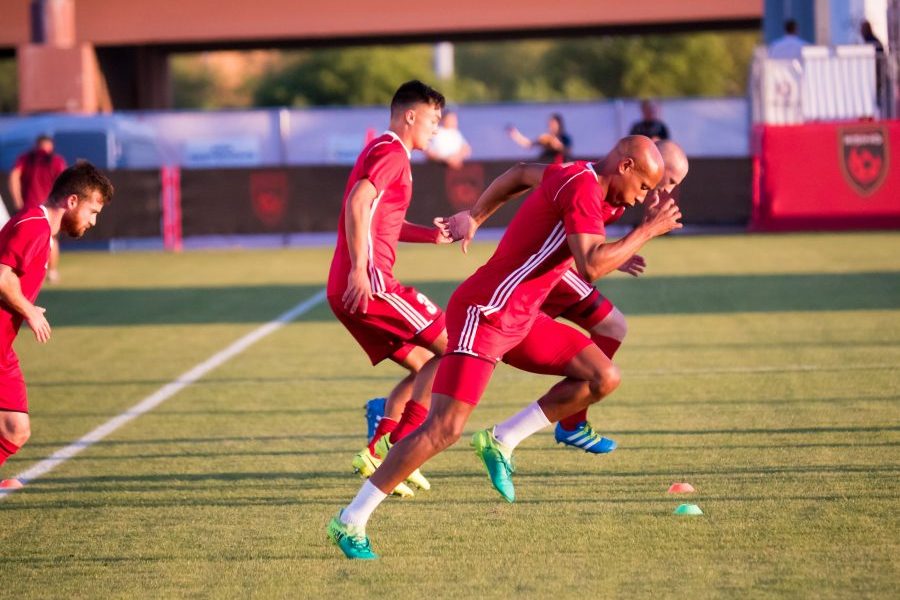 It was never going to be easy, but Phoenix Rising FC may wonder if they let a point slip away in San Antonio Saturday night, as the home team San Antonio FC took a 1-0 win. SAFC was the stronger team throughout, but the match overall lacked much excitement, and if not for a single nightmare defensive sequence, the visitors might have scraped out a nil-nil draw, as Sounders 2 did at Toyota Field just a week ago.

Phoenix looked strong in the opening minutes though, showing some speed and aggressive tackling in an attempt to match a San Antonio attack that had much more gas in the tank.

San Antonio native and United States U-19 international Devin Vega got the start in the middle for SAFC in place of the veteran Rafa Castillo, possibly to capitalize on the Phoenix midfield, which was forced into a re-imagined setup due to the loss last weekend of Luke Rooney and Alessandro Riggi.

Miguel Timm and Matt Watson started the match as twin holding midfielders in front of the backline, a decidedly more defensive setup than Phoenix had become known for before the injuries. Nonetheless, the high press of the fullbacks, a holdover specialty of departed coach Frank Yallop, ensured a semblance of offense for Phoenix.

Forward Chris Cortez had his first opportunity in the 7th minute, when he one-timed a Shaun Wright-Phillips cross toward the left post, forcing a save from Diego Restrepo. That’s about as close as he would get, however.

The game shifted in the 12th, when San Antonio talisman Billy Forbes made a slicing, diagonal run down the middle of the park, and found Kris Tyrpak making a parallel run to the box. Tyrpak beat Phoenix left back Victor Vasquez to the endline and found Akwafei Ajeakwa alone at the six-yard box. Ajeakwa was somewhat fortunate to redirect Tyrpak’s perfectly-timed ball past Rising goalkeeper Josh Cohen for the 1-0 lead.

Phoenix has, on several occasions this season, had reason to rue its lack of speed and man-marking through the middle, and that would indeed prove to be the difference on the night.

San Antonio continued to attack, with Forbes and Tyrpak the primary threats, though Tyrpak and Vega had the only two other on-target shots for their club on the night. Forbes had a nifty run into the box in the 30th minute, and looked for a penalty when he was strongly stripped of the ball by Kody Wakasa and fell to the turf. No call was given, though.

Wakasa, a rookie, was targeted constantly by San Antonio, but for his part was very good on the evening.

Rising FC enjoyed almost 59% possession Saturday, but were notably weaker when San Antonio would turn up the speed, and often seemed to be simply absorbing pressure. All told, Phoenix would finish the night having taken only seven shots to SAFC’s nine, and put just one on frame.

Each side began the second half more tentatively, although Phoenix found small openings in the San Antonio defense through Wakasa and Timm.

SAFC dug in defensively until about the 65th minute, at which point they began to inch closer to the Phoenix net, putting several set pieces uncomfortably close to goal. Phoenix brought in fresh legs in Eric Avila and Mike Seth, but the visitors could not manage any serious challenges to the San Antonio defense, until the 85th minute when former SAFC player Jason Johnson bounced an 18-yard shot wide of Restrepo’s net.