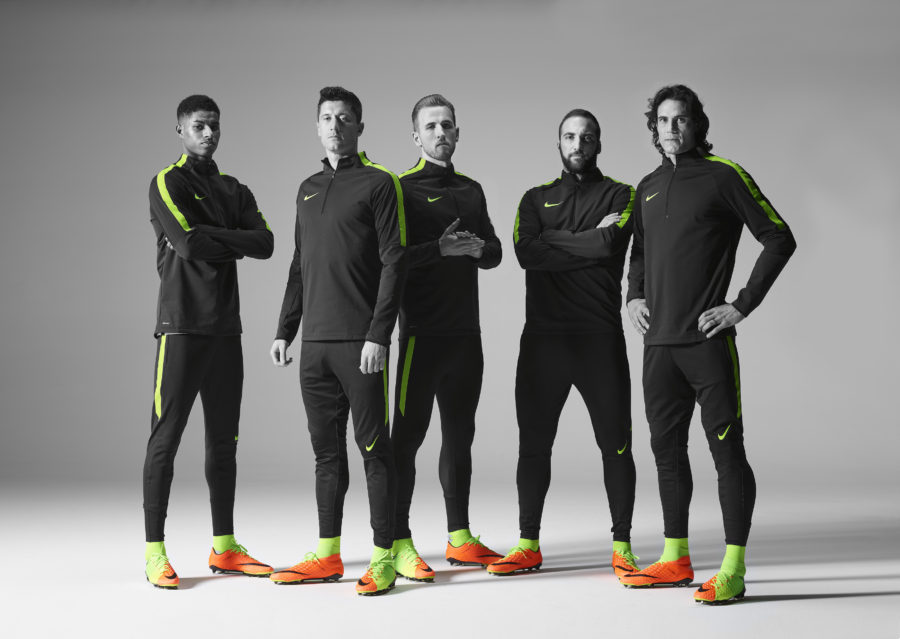 “This is a finisher’s boot,” explains Max Blau, VP of Nike Football Footwear. “Every component of this boot was built for goals.”

The Hypervenom 3 cleats were designed with the end in mind. With a rippling net nestled firmly in the forefront of his mind, designer Dylan Van Atta conceived a cleat with two components in mind: cutting and striking. Now adopted by the most lethal of attacking players, Marucs Rashford, Harry Kane, Robert Lewandowski, Edison Cavani, and Gonzalo Higuain are just a few of those whose game is about to climb to the next level with the new Nike Hypervenom 3.

The HV3’s multi-layered Poron foam pods integrate with a Flyknit upper to emphasize the ultimate aim of scoring. The pods activate with rigidity when striking the ball at high velocity to create a firm launching pad for precision striking, yet are flexible enough to cushion and dampen softly when making contact at low velocity.

“We wanted a softened, flexible upper on Hypervenom 3 and knew Flyknit was the best way to achieve this,” explains the boot’s designer, Dylan Van Atta. “By designing down to the pixel, we’re able to bond the texture only where necessary to keep it supple for comfort and touch.”

The Hypervenom 3 comes with several lateral stability features, including a new FEA data-informed traction pattern built for lateral cuts at sharp angles. The new Dynamic Fit Collar has been redesigned to include an agility cuff to help secure the ankle at those moments where attackers cut and shift direction, avoiding tackles and opening up finishing angles.

“The Hyper-Reactive plate has been in development for six years,” states Van Atta. “We drew inspiration from Nike Free to create a more flexible forefoot that stays in contact with the ground while the heel is lifted for sharp cuts.”

This new Hyper-Reactive plate is the first of its kind as is exclusive to the Hypervenom 3. Weighing in at a eye-watering 196g,Hypervenom 3 shades its predecessor by 17% and is the ultimate finisher’s boot.

You can find Nike’s new Hypervenom 3 at soccerloco.com starting January 30.