When I woke up Friday morning, September the 8th, 2017, I had that old Winston Churchill line echoing in my head.

“The GREATEST thrill a man can experience,” Churchill once said, “is to be shot at and missed.”

Walking around Colonia Roma that morning, I could feel this quote being applicable to almost every man, woman, and child I laid eyes on. There was an uncanny sense of relief in the air of the neighborhood that was essentially destroyed by the tragic earthquake of 1985 which killed over 10,000 people.

I hadn’t been able to sleep much the night prior, and it didn’t seem as if anyone else had either. The 8.1 magnitude earthquake that was felt in Mexico City, the biggest since that awful day 22 years prior, was a theoretical gunshot skimming the hairs on the collective head of yours truly and the people around me.

As I read about the horrible news out of Chiapas and Oaxaca, the death count rising in the rural areas closest to the epicenter, I took a moment to reflect and appreciate life itself.

I came to Mexico City with a plan, and it was quite clear that I had to quickly find a pathway back to a proactive approach and a positive frame of mind.

Thankfully, I knew just the place to help with all of this. 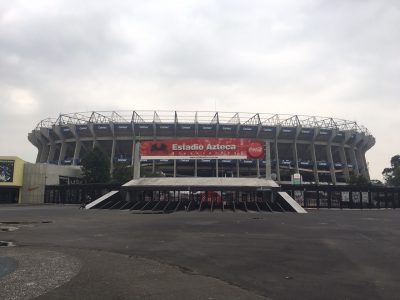 I was due to attend Club America’s match vs. Veracruz on Saturday night, and I had to make it out to Estadio Azteca the day prior to pick up my press credential.

As a steady rainfall dampened the streets and did its best to wash away the fright of the terremoto, I hopped in an Uber and took a 40 minute ride to the south, anxious to see and touch one of the most iconic football grounds in all of the world.

After attaining my credential, I took a walk inside the stadium, joined by construction crew members and a few dozen folks on cleaning duty. If I had a tail, it would’ve been wagging uncontrollably. 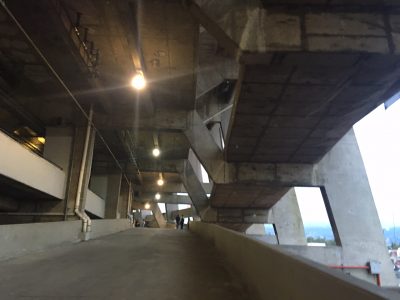 The Concrete Innards of the Azteca

When you walk in, it feels like the place is a giant beast swallowing you whole, and down into its extraordinarily expansive innards.

The concrete garages, walkways and staircases are massive. There are tunnels dipping down in almost every direction. It’s like a maze, with the ghosts of soccer’s past patiently awaiting your final steps.

After a brief stop in a mid-level suite, I made my way down and into the lower stands behind the north goal. Smiling from ear to ear, I looked out on the pitch in front of me. As gloriously overwhelming as the sheer size of the stadium was, I was more entranced by the actual field. The nostalgia truly began to flow.

At an altitude of 7,200 feet, I sat there, almost motionless, and let that nostalgia hit one wave at a time. 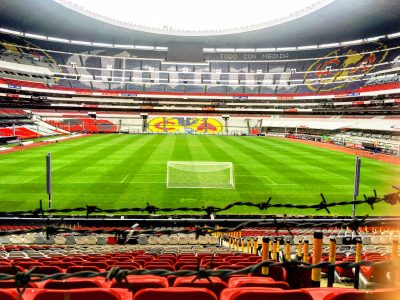 Barbed Wire Beauty: Soaking in the nostalgia of one of soccer’s most historic venues.

I could see Pele and his Brazilian teammates jogging a celebratory lap after beating Italy 4-1 in the 1970 World Cup Final.

I could see THAT Carlos Alberto goal, arguably the greatest team goal in World Cup history, what served as the icing on the cake on that scorching summer day almost five decades ago.

I could feel the appreciation of the Mexican fans in attendance that day, the gratitude for seeing perhaps the best player to ever lace up the boots ply his trade in their own country, in a fresh, new stadium that was only in its fifth year of existence.

I could see Diego Maradona and the “Hand of God”. I could hear the protests of the English players and feel the tears of joy from the Argentine fans. I could see the Barrilete Cosmico and hear the famous euphoric screams of legendary commentator Victor Hugo Morales.

I could feel the entire summer of 1986 and Diego’s Finest Hour, the lifting of the World Cup trophy after the enthralling 3-2 win over West Germany. I could see Jorge Burruchaga netting the winner, and Maradona sprinting after him for an embrace of epic proportion. 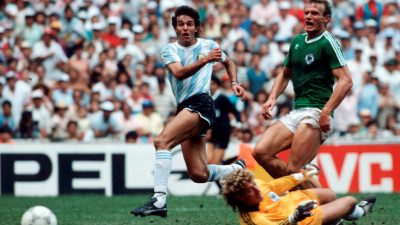 Jorge Burruchaga scores the decisive goal for Argentina in a 3-2 World Cup Final win over West Germany at Estadio Azteca.

I could see Hugo Sanchez in his prime. I could feel the passion for El Tri and the capacity crowds of well over 100,000 Mexico fans (with recent renovations, the capacity now sits at 87,000).

I could see the careers of the Mexican icons of my generation, the shaggy blonde hair and utter tenacity of Luis Hernandez, the in-game roller coaster rides of Alberto García-Aspe, the gravitas of Cuauhtémoc Blanco, the aerial prowess of Jared Borgetti, and while he may still be waiting for his own quintessential “Azteca moment”, I could see the sneaky brilliance of Javier Hernández Balcázar, a little magician better known as Chicharito.

I could see Pope John Paul II, who spoke at the stadium in 1999. 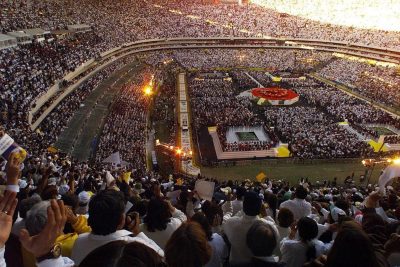 I could see Miguel “El Piojo” Herrera going apoplectic in a fit of insane, out of body ecstasy in May of 2013, as Club America goalkeeper Moisés Muñoz improbably headed home an equalizer in stoppage-time to prolong the Liga MX Clausura Final against old crosstown rivals Cruz Azul, Las Aguilas going on to win one of the most incredible two-leg ties in recent Mexican soccer history on penalties and lifting the league title. I could hear the words of Univision’s Pablo Ramirez from that wild day: “ESTO ES FUTBOL.”

I could see Costa Rican great Hernan Medford and feel the shock of the original Aztecaso in 2001, when the Ticos became the first visiting nation to defeat Mexico at Estadio Azteca, Medford with an 87th minute hammer blow on a close range rebound to win that famous hexagonal match 2-1, providing the cue to one of the greatest moments in the storied broadcast career of Mario McGregor Blake.

I could even see Michael Bradley’s wonder-chip over Memo Ochoa from this past June and hear the crack in John Strong’s voice as the United States took an early lead in what would end up as a 1-1 draw with El Tri. Hearing fans of Mexico and Club America say that Bradley’s golazo was one of the best to ever be scored in the stadium’s history really puts the goal in perspective.

The list goes on and on, and as I sat there beneath the overhang, I honestly felt like I could see, hear, and feel every wondrous moment with which this stadium has been blessed in its 51 year history.

There were angels and ghosts in every direction. Every ground that’s been around long enough can have this vibe. However, very few can possess the aura that belongs to the Azteca. It is the only stadium around the globe to host two separate World Cup Finals.

As much as Brazil v. Italy 1970 and Argentina v. West Germany 1986 were present in spirit, I was most intrigued by another fixture, one that was yet to be played.

While Club America v. Veracruz in a round 8 Liga MX Apertura affair was not exactly on the same level of prestige, it may as well have been a World Cup Final in my ever so slightly jaded mind.

I was primed and ready for my first match at Estadio Azteca.

(Stay tuned for Part 3 of “Mexico City”, as Nate Abaurrea takes in Club America vs. Veracruz at the Azteca. The series will also feature a trip to the Estadio Olimpico Universitario, and interviews with prominent writers involved with the #LigaMXeng movement.)