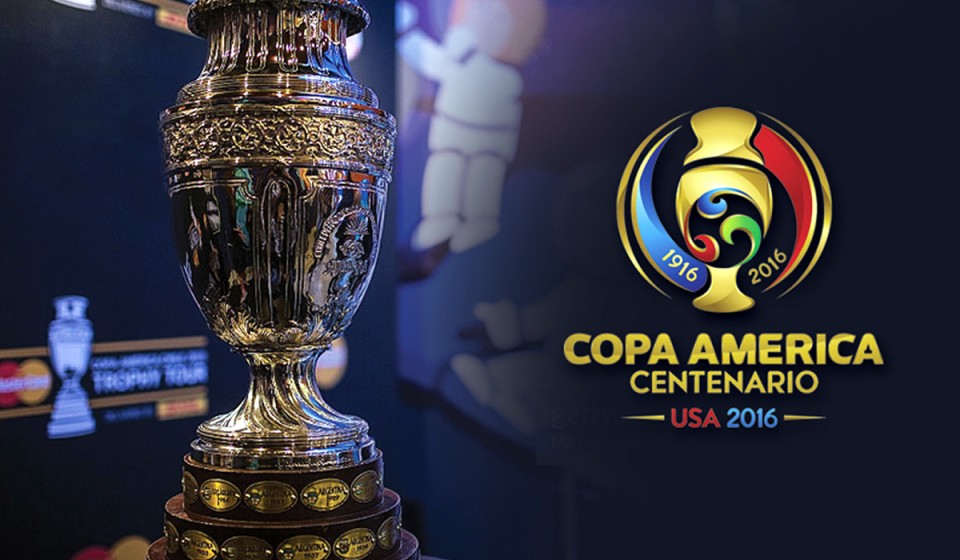 Flashback Friday: Kits of Days Past

As a jam packed summer of international soccer approaches, with the Copa America Centenario, the European Championships, and the Olympic Games all taking place, soccerloco.com has you all set to be rocking your favorite country’s kit.

These 2016 kits are sleek. They have a high-performance style, and represent a new era of soccer apparel.

Nate Abaurrea was given the task of comparing and contrasting these new kits with past garments of countries who will be participating in the major tournaments this summer, personally digging deep into the bags of history, reminiscing on the good, the bad, the ugly, and the downright legendary. You can call them jerseys, shirts, tops… We don’t mind. Nate’s got three in hand for this round. Let’s see what’s in store.

It’s good to see El Tri donning a traditional green jersey for this summer’s Copa America Centenario. The last few years have seen them switch their preferred kit from black, to green, to white, and even to neon red at the 2014 World Cup. A green jersey is what I think of when I think Mexico. 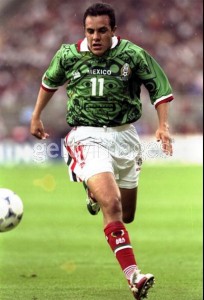 There was no jersey more Mexican than the green one worn during the 1998 World Cup. Built around the imagery of the traditional Aztec Calendar, this top contained culture, pride, and passion. It embodied what international soccer should be about, representing one’s footballing heritage to the maximum potential.

There was something truly special about Cuauhtémoc Blanco wearing this particular Mexico kit. The three time World Cup star and Mexican icon was named after Cuauhtémoc, the 16th century Mexica ruler of Tenochtitlan and the last Aztec Emperor. The name Cuāuhtemōc means “one who has descended like an eagle”. Seldom has Mexico played with more passion than when Blanco was a part of the squad, and seldom have they looked better than when these kits descended on France 98. El Tri were famously beaten 2-1 in the round of 16 in that tournament by Germany, who came from behind to win through goals from Jurgen Klinsmann and Oliver Bierhoff. Oh the 90’s. 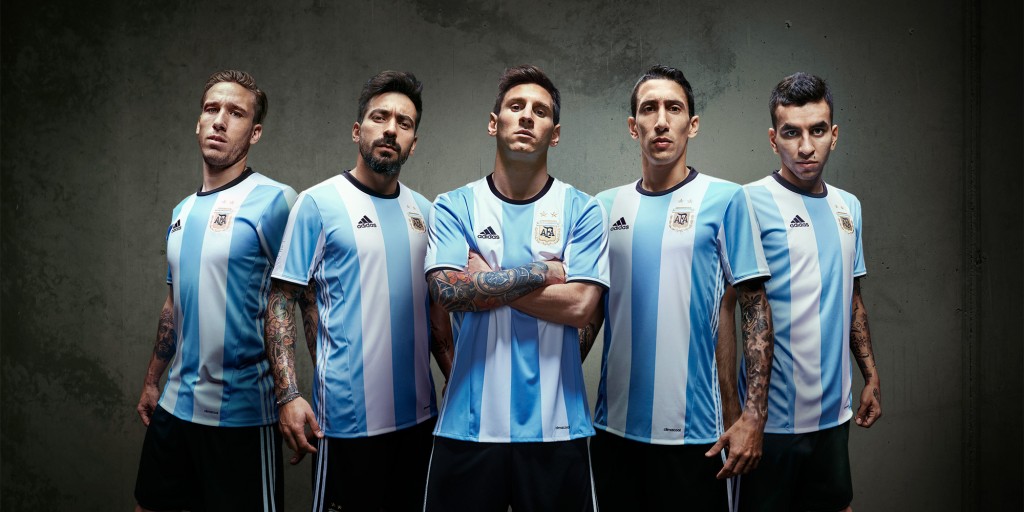 There is no country more traditional when it comes to soccer tops than Argentina. The light blue and white vertical stripes have been a staple for over a century, after the Argentines ditched their all whites in 1911 for the look that has stayed with them ever since. Apart from the material, their kit for Copa America here in 2016 is almost identical to the one they wore in 1912. Even their secondary kits have stayed the same shade of dark blue for generations.

This got me thinking… Has Argentina ever worn an “alternate jersey” at a major tournament? The answer is yes, and it’s one of the strangest stories in international kit history.

On June 8th, 1958, Argentina was due to play West Germany in their opening group match. The game was held at the Malmo Stadion, home to Swedish side IFK Malmo. The Germans wore their traditional whites, with the Argentines donning their customary light blue and white stripes. After deeming that the teams looked too similar, the officials ordered the Argentines, the away team on the day, to go back to the dressing room and change into their second kit. There was but one major problem. The Argentine team did not bring a second kit with them to the World Cup! The Germans had a second kit they easily could’ve changed into, but refused, claiming that they were the home team on the day, and that the visitor’s inability to find an acceptable solution should force them to forfeit the match.

Scrambling, with kickoff rapidly approaching, the staff in Malmo knew exactly what to do. They ran to a back room, dug into the IFK Malmo box, and provided Argentina with kits for the day. 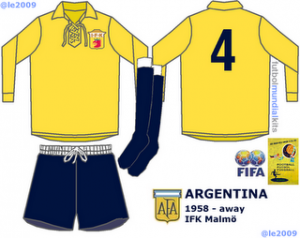 Argentina, wearing bright yellow, the color of their greatest rival, Brazil, took a 1-0 lead against the Germans, only to lose 3-1, and eventually crash out of the World Cup at the group stage.

Argentine soccer is filled with some fascinating folklore, but few stories are more bizarre than
“la maldición de los camisetas amarillas”, the curse of the yellow shirts. 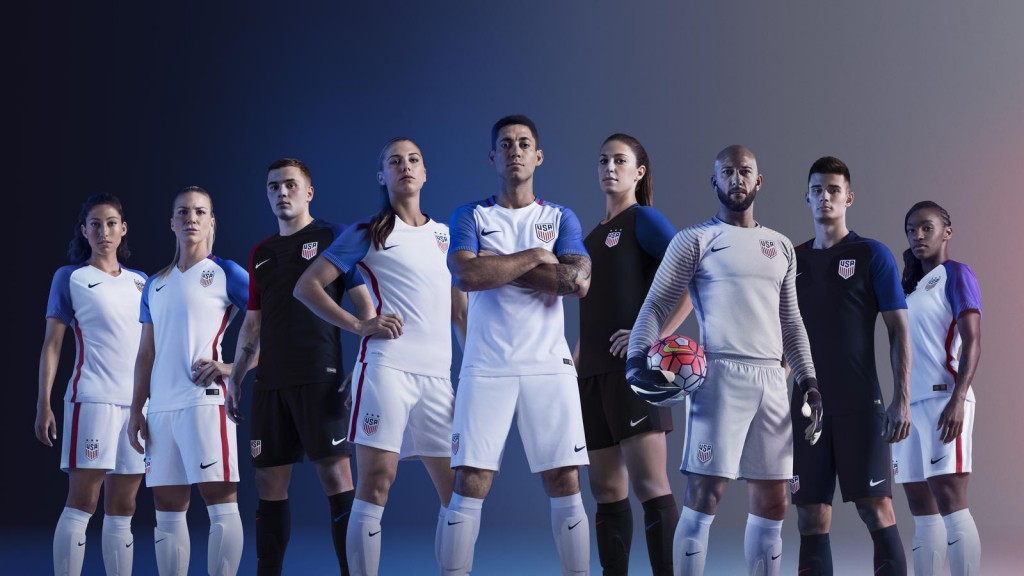 There’s been a lot of talk, both positive and negative, about the new USA kits, which they will be wearing while hosting the Copa America Centenario this June. This special edition tournament is the first time the U.S. has participated in Copa America since 2007. 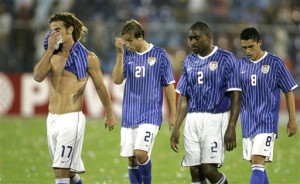 The team that traveled to Venezuela for that tournament was, in many ways, a second string squad, with the competition happening right after the 2007 Gold Cup, which the U.S. won in epic fashion, a 2-1 come from behind win over Mexico in Chicago. (That Mexico match took place back in a time when two men by the names of Landon Donovan and Benny Feilhaber. were not only welcomed by the U.S. manager, but also scoring valuable goals for the national team.)

When Bob Bradley led his team into their first Copa America match in July of ’07, against a loaded Argentina team that was pegged to win the whole thing, they looked different. Not only was the squad completely changed and slightly inferior to the one we’d seen during the Gold Cup, the Americans walked into Estadio Jose Pachenco in Maracaibo that night with a unique kit.

It was one they’d debuted earlier in the year, a third kit that was met at the time with mixed reviews. The overall design was peculiar, and really had no direct connection to any U.S. top of the past. It was solid blue, with white pinstripes, accompanied of course by the USMNT and Nike logos. I thought it was awesome. I loved the kit when Landon Donovan donned it and scored a stunning hat-trick in a friendly against Ecuador in Tampa months prior, and I loved it as the young B-team neared kickoff against a team that included Lionel Messi, Carlos Tevez, Juan Roman Riquelme, and Hernan Crespo.

First off, pinstripes are cool. From Clark Gabel in ’36 to Tupac Shakur in ’96, Winston Churchill to the New York Yankees, there’s just something so utterly cool about pinstripes.

Secondly, it was something new in a long run of repetition.

When the U.S. took a shock lead from a 9th minute Eddie Johnson penalty, it looked like the pinstriped blues were a lucky charm. The U.S. already had history of beating Argentina in Copa America, a glorious rainy night in Uruguay in 1995 that saw them win 3-0. Now they had pinstripes!

The other teams in the U.S. group that summer? Colombia and Paraguay. Sound familiar? The U.S. lost those next two matches and left Venezuela without a single point to their names. While there wasn’t much positive expectation for the tournament, the results were still a disappointment.

You don’t really hear much about that U.S. kit that they wore in the opener. I imagine it would be quite to the contrary if they were to pull of a pinstriped miracle against the mighty Argentines.

Perhaps the most underrated aspect of a kit’s quality is how a team plays while wearing it. Think back to 1994 and those horrifying blue-jean tops with the distorted star design. We love those, simply because they are associated with one of the greatest days in American soccer history, a 2-1 win over Colombia at the Rose Bowl.

This ties right back to these U.S. tops here in 2016. If the Americans stumble and fall out of the Copa early, these much discussed kits will be quickly forgotten. If Jurgen and the boys can pull off something special this summer, those new jerseys will be fondly remembered for years to come.

I can’t wait for this summer. I also can’t wait to see which kits we dig up next here at SoccerNation.

Hailing from Watsonville, California, Nate Abaurrea is a writer and broadcaster specializing in coverage of the beautiful game on both sides of the USA-Mexico border. In addition to the #SNPod, Abaurrea's voice can be heard calling Liga MX matches in English for Club Tijuana, USL-PDL action with So Cal Surf, and the MASL with the San Diego Sockers. He also loves wine. And tacos.
Newer Post
3 Things to Watch: NC Battalion v. Temecula FC
Older Post
SoccerNation Coach’s Corner: NC Battalion’s Ryan Guy – Chapter V