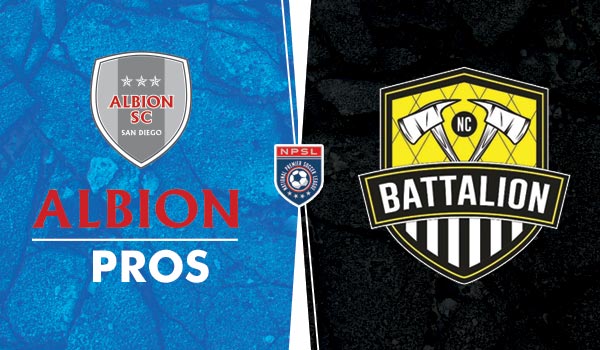 In a special edition of Soccer Nation Coach’s Corner, Nate Abaurrea caught up with both North County Battalion Head Coach Ryan Guy and Albion Pros Head Coach Ziggy Korytoski, as San Diego gets ready for Saturday night, and the second ever meeting between the two local NPSL sides.

Nate Abaurrea: “How are you feeling coming into this thing?”

Ryan Guy: “We’re feeling good. We’re hitting a point, both in training and in games, that has me hopeful and confident, not only going into this game but also in hitting the stretch run of this season.”

Ziggy Korytoski: “We’re satisfied. These last few weeks have been terrific, but we want more. We’re the cream of San Diego right now, atop the table at the midway point of the season. We’ve got six matches left and we want 18 points. The first three need to come Saturday.”

NA: “Albion came into Del Norte Stadium on April 16th and left with a 3-1 victory. Why did that game go the way that it did?”

RG: “There’s a number of ways we could go with this, but the number one thing that we took away from that game was the necessity of improving our fitness. To play so well for 60 minutes, and then, for all intents and purposes, break down towards the end the way we did, it left a sour taste in our mouths, and the disappointment from that night is vivid to this day. We have made some major changes in our training regimen, and I know that we are ready to put a complete game together on Saturday night.”

ZK: “It was a tale of two teams. They are a physical, aggressive team, and for the first fifteen to twenty minutes, we struggled to adapt. They bossed the game early, and to be fair, it very easily could have been 2-0 in their favor inside a half hour. But we saw a resilient group that overcame that early pressure. We benefited from some keeper errors, and they did as well for that matter. We did all the little things that you need to do. We possessed and made them chase once we had the lead, and took their crowd out of the game. It was a passionate moment, the realization that we walked in to their house and took all three points. It set the tone for what we’re trying to do this season, and that’s to win this conference, and make it all the way to the national stage.”

NA: “6 matches played. 6 matches to go. Why did the first half of this season go the way that it did?”

RG: “With how this team came together, I feel like we were forced to play catch-up in a number of ways. We have 10 points, and sit 4 points behind the league leaders. Our results have by no means been awful, but they’ve been below our standards. We need more, and I feel like this game comes at a perfect time, right as we’re picking up some serious momentum. This game could serve as a launching pad to where we should be, and that’s right there with them at the top of the table.”

ZK: “Preparation and accountability. Every guy is ready to step up at anytime, and that’s what it’s all about. I’m so proud of the depth on this team. We’ve had weekends when we’ve been fully healthy. We’ve had weekends when we’re not close to full health. The fact that there has never been a drop off in quality makes me immensely happy, and says a lot about these players, and their desire to compete.”

NA: “What does this match-up mean to this city, and to our soccer culture here in San Diego?”

RG: “Both of these organizations have brought new and improved professional soccer to the city that we love dearly. Both organizations are also doing it in different ways, and people in this community are picking sides, with both teams anxious to show that their soccer model, on technical and political levels, is a superior one. Now, a 90 minute game doesn’t necessarily provide a concrete answer, but the players on the field definitely know that that’s one of the things they’re fighting for. Even if it’s just for three or four weeks, the ability to say ‘our model is superior’, or even something as simple as ‘our team is better’, that’s what it’s all about. That’s a derby. That’s a rivalry. Cultural and ideological differences within the same city, hashed out by 22 men on a Saturday. It’s a beautiful thing, and no one benefits more from all of this than the people of San Diego.”

ZK: “Honestly, Nate, this is all so great to see. The two clubs are competing on and off the field, trying to establish themselves as premier organizations for the benefit of San Diego. On that community side, the people of this city have an opportunity to see some high level soccer. At this moment, it’s just a fact that these two teams are the highest level of outdoor soccer in this city, and people have an opportunity every week to see them play. This week they’ve got a phenomenal opportunity to see them both as they go head to head. This match-up is an event. While I as a coach am focused firmly on what happens on the field, I know that the game itself is just a part of the whole event. It’s gonna be an exciting night filled with passion and energy, and these players want it to simply be a part of our grand objective as a team, and that’s taking Albion Pros all the way to the top.”

NA: “Time for the classic track… What are your ‘3 Keys to Success’ this Saturday night?”

They are an incredibly active team, and we must not let that activity take us out of the shape that we’ve set up.

This is also known as the art of not letting in goals.”

The Battalion are a macho, physical team. We need to be disciplined, and make sure we play our game.

We need to handle their flair guys, especially Esteban Reyes. I’ve got great respect for that young man, and I don’t want to see him score again on Saturday.

We have one of the most dynamic teams in the whole country, and we need to show it. We need to be smooth, and work for one another. A full team effort is what it’s gonna take to get three points, and that’s all we have in mind.”

NA: “Any final words to your supporters? Ziggy, since you’re at home this time around, I’ll give you the honors.”

ZK: “Albion fans. We play for you. We play for San Diego. And we play to be champions. We’ve got a group on the field that is motivated and prepared. I know that the passion we’ll feel from you all in the stadium will play a part in what we’re out there to do. You’re a part of every moment, every goal, and every win.”

RG: “This is one of those games when support is the most important. I’ve been around the world and have seen what traveling support can do. This is, without a doubt, the most hostile environment that our players will experience in this league. There will be a point on Saturday night when our guys will need something extra, when it might seem like it’s all going against them. That extra bit can be the difference between victory and defeat. That extra bit can be you. You can be that shot of nitrous-oxide in our race car, as we gun it to the finish line. I call on every person who supports the Battalion to be there in the away stands at Mission Bay on Saturday. These players have bought into this club and what we represent, our culture. They play for that crest, the same one on your shirts and scarves and in your hearts. They are with you. Stand with them. Give them everything you’ve got.”

WHO: Albion Pros vs. NC Battalion
WHAT: NPSL Southwest Conference Matchday 7
WHEN: Saturday May 21st, 5 PM
WHERE: Mission Bay High School
WHY: (see article above)

(If you are not in the San Diego area, or are unable to attend the match, tune in via the livestream on YouTube and NCBattalion.com with Nate Abaurrea on the call from Buccaneer Stadium at Mission Bay.)