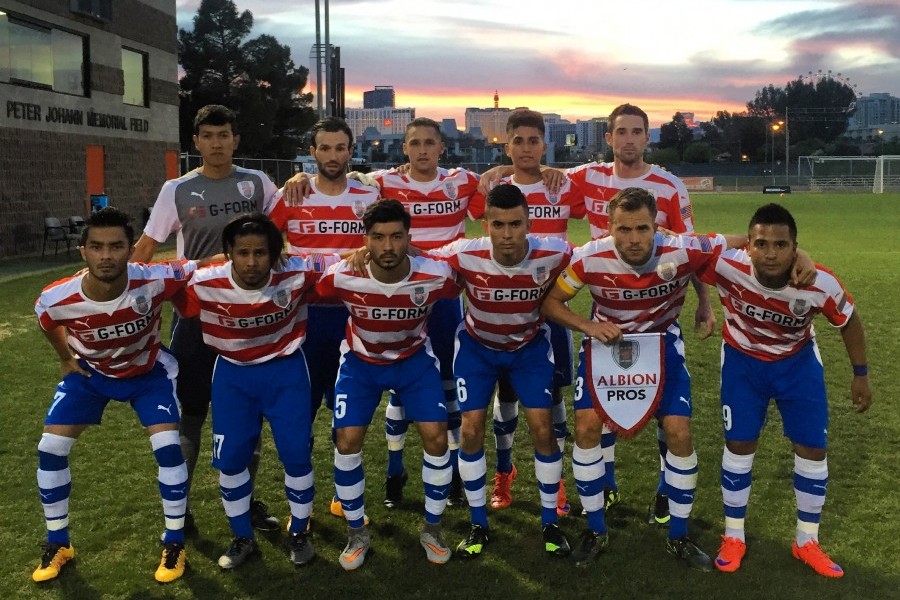 Albion Pros knew that it would be a tough game against a quality side with continuity, athleticism and plenty of talent. It was the perfect kind of challenge that they would hope to see in the upcoming National Premier Soccer League (NPSL) season.

The 7pm kickoff at UNLV’s Peter Johann Soccer Field started with brightly with both teams looking to keep possession of the ball and find an opening in the opposition’s defence. After a few half chances from each team, the Running Rebels capitalized on an Albion Pros midfield mistake in the 20th minute. An Albion Pros central midfielder was stripped of the ball by the second UNLV forward. The UNLV attacker then played a ball through the stretched Pros defense to forward Danny Musovski. Musovski took one touch and calmly slotted a precise shot into the lower left side netting of the goal.

Albion Pros tried to respond with an increased tempo to their passing movement and more penetrating passes, but a stout UNLV team kept them from finding an equalizer. In first half stoppage time things got worse for Albion as UNLV jumped on a loose ball in midfield. Musovski muscled his way through the Albion defense to fire another shot past the goalkeeper and give UNLV a 2-0 lead at the half.

Albion Pros started the second half strongly, looking find a way past the organized UNLV defense. In the 55th minute a moment of magic worthy of a place on Sportscenter’s Top 10 materialized. Midfielder Guillermo Chinchilla lofted a ball into the box for Brazilian forward Douglas Andrade who did the unthinkable. Andrade chested the ball high into the air then executed an extraordinary bicycle kick to reduce the deficit back to one goal. UNLV 2 – Albion Pros 1.

As Albion Pros chased the equalizer, UNLV pinched the ball and countered extremely quickly in the 80th minute. After a well-defended corner kick was repelled, the UNLV forwards raced down the field and put the game to rest. Three passes culminated in a hat-trick goal by FW Danny Musovski and Albion Pros’ final preseason match finally ended. The score finished 3-1 with UNLV giving the Albion Pros team their only loss of the preseason.

Albion Pros now look towards the regular season of the NPSL Southwest conference.

Albion Pros open their inaugural season away to Deportivo Coras at UC Riverside on Sunday April 3rd at 6:30pm.

Tickets to Albion Pros games can be bought at ProSoccerSanDiego.com.