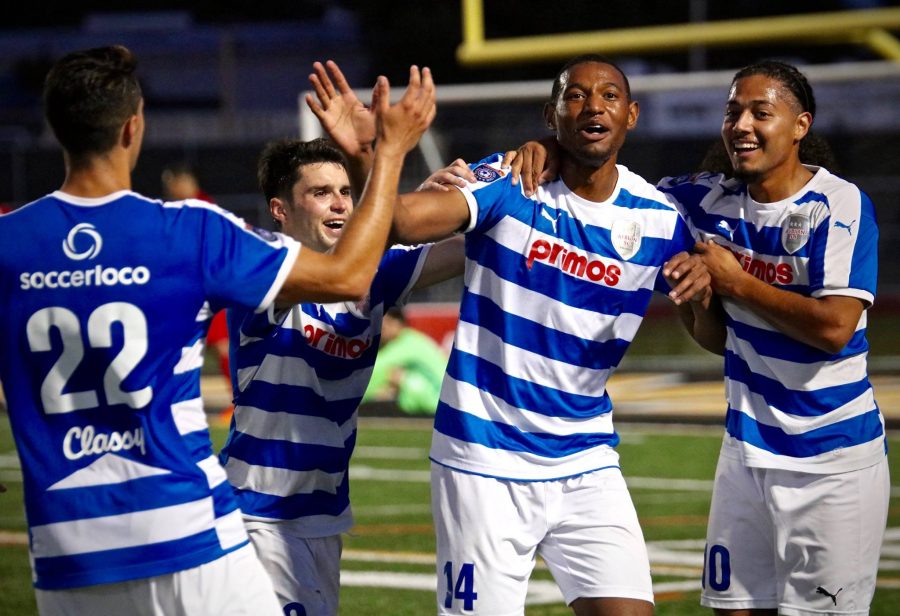 The reigning National Premier Soccer League Southwest Conference champions appeared to be dormant in the early stages of the 2017 season. This Saturday in Pacific Beach, however, the once and perhaps future champions arose.

Albion SC PROS played host to current Southwest Conference league leaders Riverside Coras and romped to a spectacular 3-0 win that is sure to have sent a message out to the rest of the league. All of a sudden, the PROS are awake and ready to continue to push into the playoffs in their best form.

The warm San Diego atmosphere resulted in a blistering artificial turf. Coras opened the game strongly and seemed to channel the field’s fire, only to be calmly and coolly controlled and then extinguished by a PROS side that no doubt remembered their previous encounter, where they were defeated at Riverside 2-0. The PROS clearly learned a lesson from that match, and built a smart and extremely collective game plan for the rematch.

Riverside is a physical team that will swarm a defensive line and create opportunities with very talented players up top. The PROS took matching a high press from Coras and began playing one touch football in triangles, with the outside backs making penetrating runs behind a Coras defense that could not keep up with the pace set by the PROS for 90 minutes.

The flow of the game came from an inspired and dazzling performance from PROS Man of the Match Sean Callahan who had was partnered by an equally astounding defender, Frankie Sanfilippo who created havoc along the left flank in virtually every attack they created.

The first 25 were dominated by Coras. The team from Riverside attacked early and often, and created chances at will but just could not penetrate the back line with the likes of Kuba Waligorski and Travis Nicklaw being a complete and impenetrable wall.

The day’s heat combined with the PROS backing off the attack in the early stages broke down a Coras side that huffed and puffed but ultimately couldn’t forge a breakthrough from the early onslaught.

The 33rd minute gave us the first PROS goal when forward Amani Walker elevated and made a swivel like connection with his head on the size 5 to find the opener.

The second half saw a continuous attack and control from the PROS that did not let up.

In the 50th minute, David Luquen outpaced a Coras defender on the right flank, as Luquen cut inside into the penalty box, he was clipped from behind, the referee took a long look but made no gesture as the Riverside defenders carried on.

Only two minutes had transpired before the exact same play to repeat itself as Luquen once again found space inside the box and was brought down, the official once again took a long look and held up two fingers in Luquen’s direction, apparently indicating two dives to his sight.

A brilliant corner kick routine in the 57th saw Frankie Sanfillipo making a bending run to the back post, before rising and snapping a powerful header to send the ball to the back of the net.

The remainder of the match was aggressively played from end to end of the field. The quick touches into space with overlapping runs, as well as an excellent shape that shifted from the back line all throughout the attack was too much for a Coras side that seemed to tire out trying to play catch up with a PROS side that has shown its match fitness to be of the best in the league.

Callahan and Sanfillipo continued to have their way down the left flank and with the entrance of midfielder Felipe Liborio, the control became absolute. Time and again Liborio would receive the ball in midfield and swiftly turned up-field, shifting the attack too quickly for Coras defenders to react creating even more attacks on the right with Luquen and fresh substitute, Tre Hayes.

The third and final nail in the coffin came right at the end, the 87th. Liborio made a cutting run into the right side of the box, after being confronted by several defenders, he managed to get a touch to Hayes who battled for possession before poking the ball into the back of the net.

The PROS took a massive opportunity to give the league a warning with Albion fully displaying the football of a championship side making their way into the playoffs. This is a massive boost heading into the remaining matches.

“Six games to go, but one at a time,” said gaffer Ziggy Korytoski.

An impressive win for the PROS and equally for Jean Antoine who earned his first clean sheet of the campaign, despite still possessing one of the fewest goals-against rates in the league with 12 conceded.

The PROS next match will not be until June 3 at LA Valley College against City of Angels FC, until then, Albion will let this massive victory ring in the Southwest Conference.

“Players know what’s on the line and what they’re playing for,” said Korytoski “we wanted this to be a statement game.”

Newer Post
3 Things: So Many Good Goals! San Antonio’s Rise And Press Leads Red Stars
Older Post
Episode 29 – The Gloves Come Off in the Battle for SoccerCity, Club Tijuana Bow Out of the Liguilla