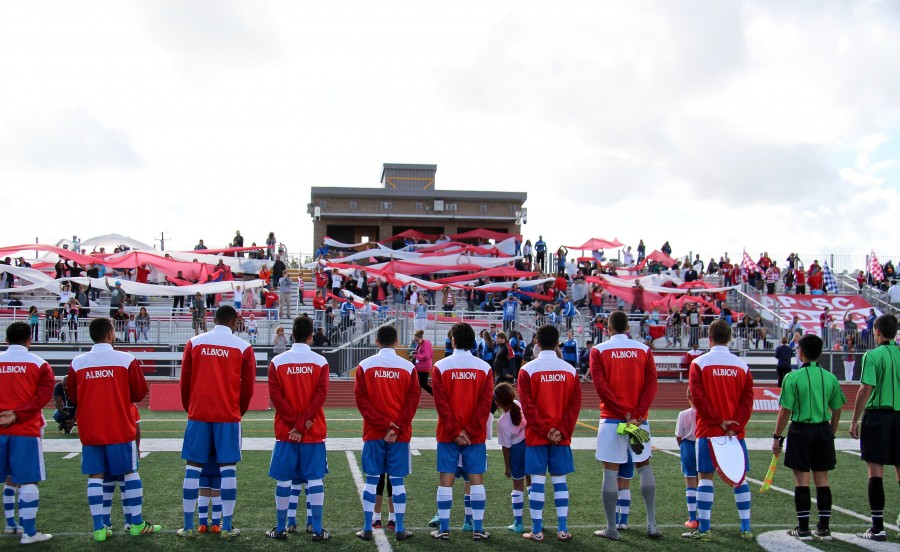 San Diego is widely regarded as the United States capital of craft beer micro-breweries. However, it was soccer that was brewing on a beautiful San Diego Saturday afternoon as Albion Pros SC hosted the North County Battalion in National Premier Soccer League play. Over 800 fans came to Mission Bay Stadium to become part of the local San Diego Derby with flags waving, drums booming and banners flying. The atmosphere at the stadium during this budding rivalry was palpably tense. The match ended 0-0 with both teams creating chances, but neither being able to convert in what was a fantastically entertaining game.

The aptly named Craft Beer Cup started like a sparring match with both teams finding their range in the opening minutes. Albion Pros had the majority of possession and created a few openings through the attacking central trident of Matt Clare, Tre Hayes and especially Matt Veltri. However, Albion was almost caught out by NC Battalion’s Sergio Valle Ortiz through a free kick that deflected off the crossbar. Nothing came from it and Ray Reza responded with blasting a knuckling shot that Stroud parried back into the box, before the Battalion defense cleared the danger.

Albion Pros then weathered a number of attacks from NC Battalion with Esteban Reyes coming closest with a volley from a corner that was fired just wide. From then on, Albion Pros had wave after wave of attack on Battalion’s goal. Clare came closest in the first half from an incisive through ball that goalkeeper James Stroud blocked with a fortunate left foot. It ended 0-0 at the half despite both teams having chances to break the deadlock.

[quote_box_center]”The most entertaining 0-0 game I have ever seen. They hit the crossbar 3 times, lots of shots and 2 red cards. Wow!” – San Diego Soccer Fan[/quote_box_center]

The second half started like a dream for Albion Pros. NC Battalion’s star central midfielder Nelson Pizarro was sent off literally seconds into the second half when he was shown a second yellow card for a late challenge in the midfield. Albion quickly looked to press their advantage. Tre Hayes, David Luquen and substitute Oscar Ortega had 3 clear cut chances in one play, but the post was NCB GK Stroud’s best friend. Minutes later, Clare played in Luquen who cracked the ball past Stroud only to see his effort cannon off the crossbar.

In the 77th minute Albion Pros Captain was shown his marching orders for two yellow cards in the space of two minutes. The last 12 minutes was played 10 vs 10. Neither team could find an opening despite both teams having set piece chances to score. NC Battalion’s Goalkeeper James Stroud ended the match with 12 saves and Man of the Match honors for keeping NPSL Southwest Conference’s only undefeated team off the score sheet at home.

NC Battalion return to action May 28th at Corinthians USA also at 7pm.