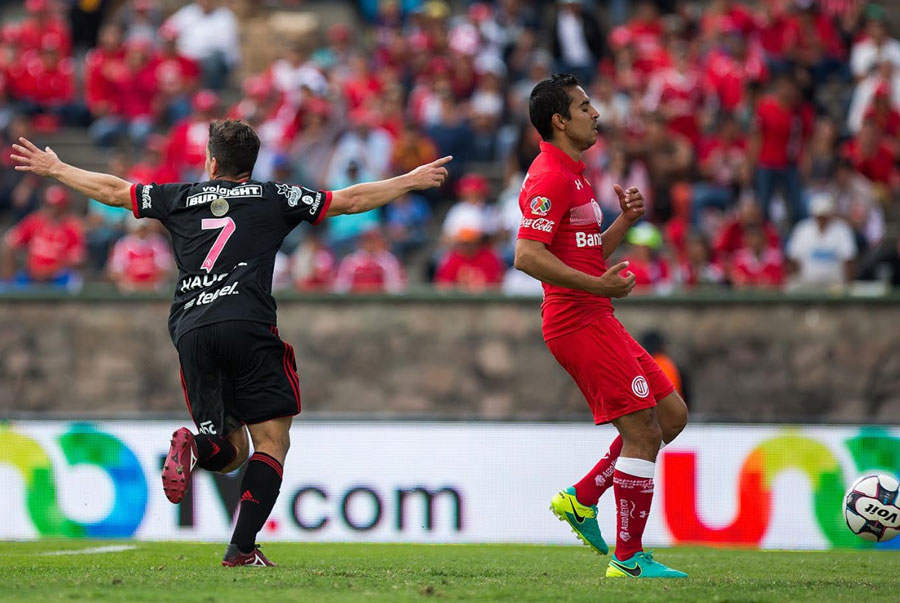 Club Tijuana Sneaks by Toluca with a Narrow Away Victory

A win is a win, no matter how unattractive it appears.

On Sunday, Club Tijuana was lucky to walk away with a 1-0 victory against a Toluca side that looked like the better team throughout the 90 minutes.

While Xolos were atypically disorganized and poor with their possession, Los Diablos Rojos were effective with their interceptions and hungry for a goal against the league leaders. Were it not for the heroics of Tijuana goalkeeper Federico Vilar, who was easily the man of the match with his countless saves, Xolos could have easily finished with a 2 or 3-0 loss over the weekend.

The stats speak for themselves: Toluca had more possession, shots, hit the woodwork twice and finished with nearly double the amount of passes as Tijuana.

Yet it was the chaotic and confused Xolos who emerged with a win.

Thanks to a counter created by a well-timed tackle from Emanuel Aguilera, Gabriel Hauche was able to score the game-winning goal off a perfectly placed cross from striker Milton Caraglio in the 72nd minute. Toluca immediately threw numbers forward after the goal, but once again failed to get anything past Vilar in net.

Credit should also be given to both Juan Carlos Valenzuela and Aguilera, who had a few key defensive moments that also helped keep Los Diablos Rojos scoreless on Sunday.

Despite Vilar’s performance, and the fact that Caraglio now has a noteworthy tally of three goals and five assists in the tournament, the biggest talking point for many will unfortunately be about Dayro Moreno.

After a largely ineffective 1st half, Moreno was substituted out of the match during the 52nd minute. Clearly bothered with the decision, the current Liga MX leading goalscorer walked straight off the pitch and into the locker room. Manager Miguel Herrera later commented on Moreno after the game.

“We know who Dayro is,” stated Herrera. “He has a certain attitude but the team has thick skin. There’s nothing there. He spoke with his teammates and apologized. Those are moments that happen and we are moving on. We learn from them.”

As mentioned beforehand, Xolos’ strange and haphazard performance somehow led to a win on Sunday afternoon. Whether that’s good or bad news all depends on your perspective.

On the way to any championship, most clubs need a little luck on their side. During Week 15 of the Apertura, Xolos had plenty of good fortune from the soccer gods. However, with the playoffs just around the corner, Tijuana should do its best to avoid peculiar performances before fighting for a title.

Other results from Week 15 of the Apertura

Veracruz 1-4 Pumas
Pumas are back in a playoff-worthy spot in the top eight. With goals from Abraham Gonzalez, Fidel Martinez and Luis Fuentes, the Mexico City club gained three points that pushed them up to 6th place.

Chiapas 1-2 Queretaro
Queretaro gained a dramatic victory after a 92nd minute goal from Edgar Benitez. The win was enough to help keep Los Gallos Blancos in a tenuous spot for the playoff race.

Tigres 1-1 Monterrey
Saturday’s Clasico Regio finished with a disappointing draw for Monterrey. Los Rayados were more dominant in the match, but struggled to find more than one goal against Tigres.

Morelia 2-1 Necaxa
Necaxa’s undefeated streak is now over. The loss to Morelia was the first defeat for Los Rayos since August 13th.

Pachuca 3-2 Atlas
Credit to Pachuca for bouncing back against Atlas. After allowing two goals from Los Zorros, and missing a penalty, Los Tuzos fought back with three goals in the hard-earned win.

America 3-1 Santos Laguna
Santos’ problems continue. Los Guerreros are now officially out the playoff race and have gone six matches without a win.

Chivas 3-2 Cruz Azul
After gaining his first start since May, veteran Francisco Rodriguez provided the handball that led to Chivas’ game-winning penalty in the 93rd minute.

Puebla 2-2 Leon
A tale of two halves. After taking a 2-0 lead by halftime, Leon completely fell apart in the 2nd half and allowed Puebla to respond with two goals.