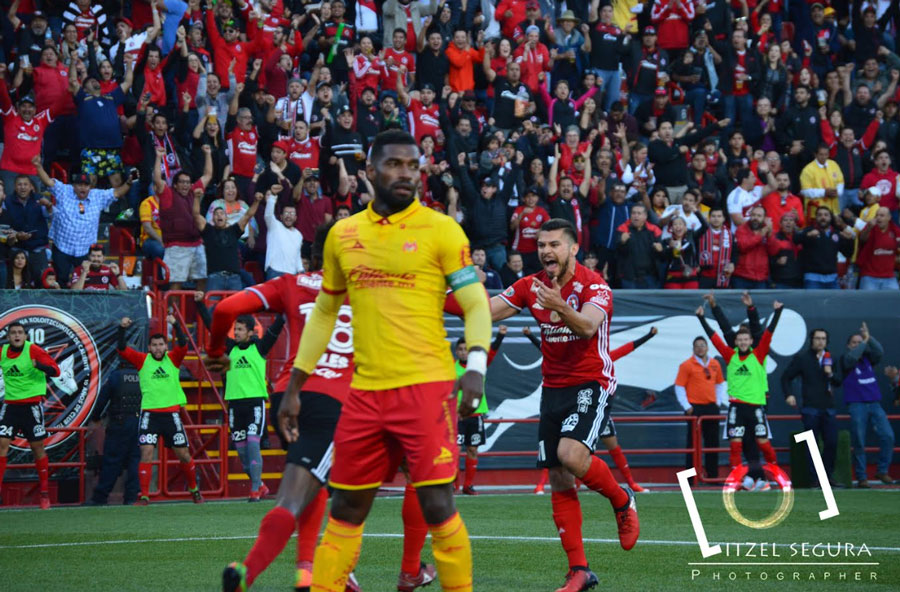 After stumbling in the first leg of the quarterfinals with a 1-0 loss, Tijuana bounced back on Sunday night with a satisfying 2-0 win over Morelia. Thanks to goals from Juan Martin Lucero and Henry Martin, Xolos sneaked past their quarterfinal opposition and gained a coveted spot in the final four of the playoffs.

The moment is a historic one for the young organization, and with a home-field advantage as the No. 1 seed, it wouldn’t be unrealistic to believe that Tijuana might be able to clinch a second-ever first division championship.

The upcoming test against Tigres will undoubtedly be a daunting one in the semifinals, but with a spirited manager like Miguel “Piojo” Herrera on the sidelines for Xolos, Tijuana will at least make things difficult for the current title-holders in this week’s clash.

Before we get ahead of ourselves here with a semifinals preview, let’s first take a look at three Xolos talking points after the recent quarterfinal win.

Despite the fact that Lucero is typically a backup player brought onto the second half of matches, the striker has collected five goals for Xolos since February. To put that into perspective, Tijuana’s current leading goalscorer this season — Aviles Hurtado — has only scored one more during that February-May run.

Also, keep in mind that Lucero only has four starts.

The Argentine’s goals-to-minutes ratio is quite impressive, and even if he hasn’t been able to earn a spot in the starting XI, Herrera can at least count on the 25-year-old for a late boost in the attack.

2. What formation works best for Tijuana?

For better or worse, Herrera has recently tried out something a bit different for Xolos.

After starting with his usual 4-2-3-1 in the first quarterfinal leg, the manager switched to a 4-4-2 during Sunday’s second leg in the Estadio Caliente. Following the win, midfielder Joe Corona confirmed with Soccer Nation that Herrera did indeed make the switch to the two-striker formation.

Although Xolos were able to find a victory with the 4-4-2, it also forced Hurtado to a more restricted right midfielder role, instead of as a central attacking midfielder. There’s also the case of Paul Arriola, who was left out in favor of two strikers during the recent victory.

The big question now is if Herrera now favors one formation over the other after the quarterfinals.

3. Will Xolos’ defense be able to withstand Tigres?

Alright, I lied about not bringing up Tigres, but I can’t help but think of the upcoming clash.

There’s a world of a difference between defending Morelia and the current title-holders. With names like Andre-Pierre Gignac, Ismael Sosa, Javier Aquino and Lucas Zelarayan in Tigres’ roster, Xolos have a massive test ahead of them.

The short answer for the aforementioned question is yes, but also a hesitant one.

Tijuana will need to be playing at its very best while also remaining compact in defense. Tigres thrive when given open spaces and have plenty of firepower that could quickly take advantage of any mistakes from Tijuana.

What is also needed is for Herrera to figure out who his starting right-back should be. After injury problems for Michael Orozco, the manager has yet to stick with either the more experienced Juan Carlos Nuñez or the promising youngster Hiram Muñoz.

Where would Tijuana be without their goalkeeper?

The 23-year-old has had his ups and downs during the regular season, but in the playoffs, Lajud has emerged as Xolos’ best. On Sunday night, the goalkeeper was vital with his saves and punches that earned a well-deserved shutout.

If Tijuana makes a run to the final, the squad will need Lajud to recreate this kind of magic in net against Tigres.

“I think the team played very well. We all ran a lot and we made ourselves strong at home.”

On any improvements needed before facing Tigres:

“I think we have to go out like we did tonight: very convinced of what we wanted. I think it’s going to be very important that we look for an away goal, so that we don’t have as much of a disadvantage. I think tonight’s win was very helpful for our confidence and I think we played very well, so we are going to try to do that over there with Tigres.”