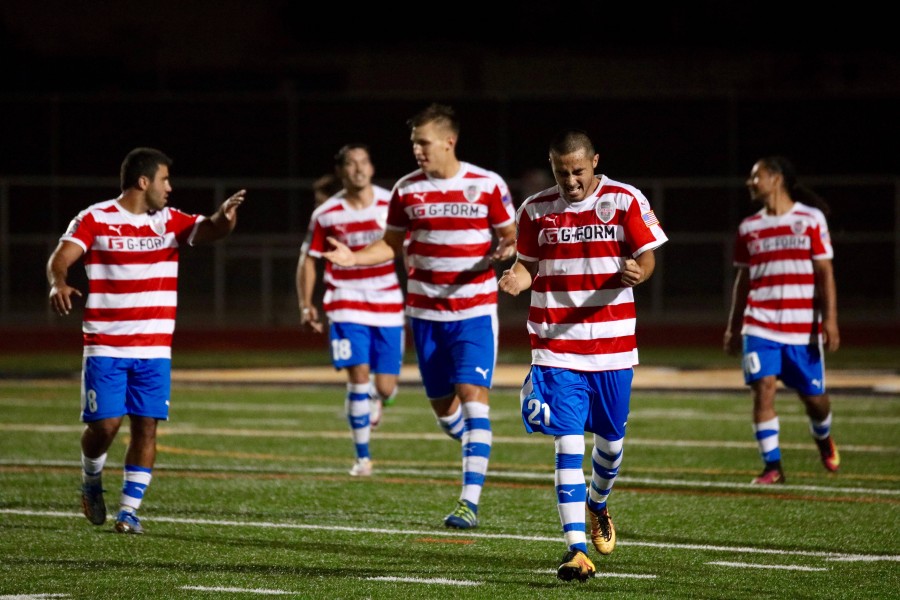 On a beautiful Saturday evening, Albion Pros hosted the National Premier Soccer League West Region Semifinals versus Seattle, Washington-based OSA FC. It was a battle of Northwest Conference Champions vs Southwest Conference Champions for the chance to play in the West Region Finals. Neither team had ever met before, but both were coming off important, hard-fought wins from the week prior. Albion Pros had endured 120 minutes and ultimately the stress of penalty kicks. Meanwhile OSA FC was put under pressure to hold on to their 3 – 2 victory over high scoring CD Aguiluchos. With over 1200 fans in the stands and drums blaring from Albion Pros’ raucous supporters group, The Deep End, the match had the atmosphere of a proper playoff match. It started brightly as well for the hosts. Five minutes into the game, Forward Tre Hayes was able to turn his defender and find a pocket of space for someone to run on to. None other than the in-form striker Matt Clare accelerated into the space behind the defenders and dribbled towards goal. OSA defenders failed to close the space and Clare calmly slotted his shot past the outstretched goalkeeper to the far post to give Albion the 1-0 lead. 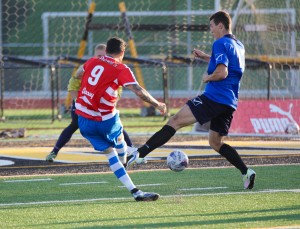 Twelve minutes later, Hayes and the OSA center defender then found themselves jostling for a long ball from center back Kuba Waligorski. Hayes was able to slip past his marker and race into the penalty area. The second center back came sliding in to block Hayes’ progress towards goal, but Hayes cut to his left side and was subsequently brought down for a penalty kick. Matt Clare stepped up to shoot the penalty and give Albion Pros a commanding 2-0 lead. However, OSA FC goalkeeper Keegan Rodgers made a diving save to his right to block the penalty shot attempt and keep OSA’s final hopes alive. Inspired by the penalty kick save, OSA FC began to mount some pressure on the Albion backline. With Albion absorbing pressure, OSA earned a handful of corner kicks and set pieces from dangerous areas. Albion Pros’ star goalkeeper Jean Antoine was called into action several times, with his most important stops being a tip over the crossbar and a point-blank body save from a dangerous cross. Despite the sustained pressure, OSA FC was not able to equalize in the first half. Albion Pros took the 1-0 lead into the locker room having played with some good rhythm in the game. 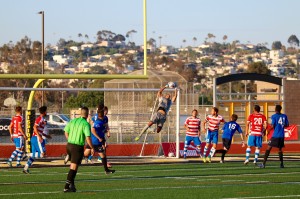 The second half started brightly for the visitors. Just eight minutes into the second half, a OSA FC forward was pulled down in the box following a dangerous set piece. OSA Forward and most dangerous player, David Coly stepped up to equalize from the penalty stop. “Super” Jean Antoine saved three penalties the week prior, could he do it again in the Semifinal? Not this time, David Coly confidently sent Antoine the wrong way and dispatched his shot high into the right side of the goal, where very few goalkeepers could ever reach. 1 – 1 with 35 minutes left in regulation. OSA FC was hungry for more goals and scored two in as many minutes. A steamroller run down the right side allowed the OSA winger to cross back to Forward Sean Russell from ten yards out to shoot. His shot skipped through the Albion defender’s legs, but Jean Antoine made a reactionary save with a strong left hand to preserve the draw. Both teams then looked to break the deadlock. The game started to open up with both teams trading counter attacks. Albion Pros then grew to have the majority of possession in the midfield as they looked to unlock the OSA defense again. Clare started to find more space on the left wing, with most of the creativity flowing from that side. The game remained deadlocked until Albion Pros earned a corner in the 86th minute. The cross was sent into the center of the box but was cleared high into the air. Experienced midfielder Raymundo Reza patiently waited for the headed clearance to fall to him 30 yards out from goal, then BOOOOOOM! Reza unleashed a first time, laser-guided volley that dipped into the bottom right corner to send the fans into euphoria! See it HERE!