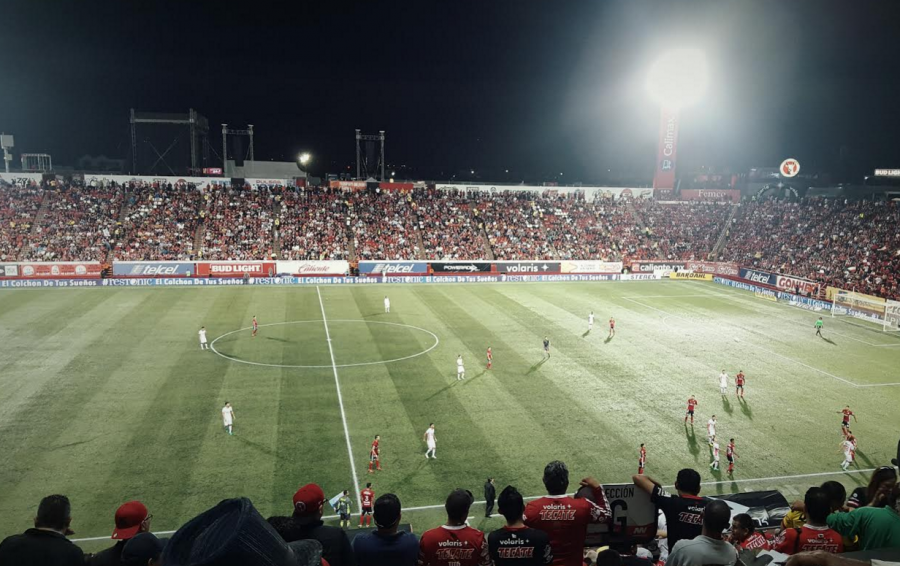 After going a full Clausura season without a win at home for Xolos, manager Miguel “Piojo” Herrera has gained his first victory at the Estadio Caliente. Thanks to two goals from Dayro Moreno, Tijuana started the 2016 Apertura tournament with a 2-0 win against Morelia last Friday.

Xolos hit the ground running during the victory with early pressure that nearly caught Morelia off-guard during the first 15 minutes. The visiting side appeared to still be in preseason mode while Tijuana created unique and aggressive attacking plays down both flanks of the pitch.

Although many have deservedly argued that the penalty call which led to Xolos’ first goal in the 47th minute was incorrect, it would be tough to say that the home team didn’t deserve to secure the three points gained.

Morelia was ineffective with the ball and failed to capitalize on the opportunities presented throughout the game. Despite the fact that Los Canarios had more possession on Friday night, the team looked lost in the attack and squandered numerous chances in the final third.

Tijuana, on the other hand, was anchored by the hard-working Guido Rodriguez in the midfield and the attacking trio of Milton Caraglio, Aviles Hurtado and Moreno. Given time, the three aforementioned attackers could prove to be one of the more lethal attacking threats in the league.

While Hurtado and Moreno dropped back on the wings, Caraglio held his own as the only true striker and provided the assist for Moreno’s second goal in the 56th minute. Due to injury concerns, Hurtado was unfortunately substituted out of the match during the first half, but all signs seem to indicate no serious worries or damage to the 29-year-old.

Morelia responded with a more assertive attacking style during the last 30 minutes, but it was too little too late for the club.

With an unexpected 4-3-3 formation, and help from six of the eight newcomers in the starting XI, Xolos have started the tournament with a new look and a new mentality that might continue to bring in wins.

Does the result say more about a promising Queretaro or the relegation candidate Veracruz? The match appeared to be heading to a 0-0 draw until two second half goals were scored by Emanuel “Tito” Villa and Neri Cardozo. Although Villa is 34, the Argentine still has enough strength and talent to be one of the best strikers in the Liga MX.

After Atlas’ Javier Salas gained a red card before halftime, Los Rojinegros fought back and found a lone goal through Martin Barragan in the 54th minute. Toluca, with a man advantage, couldn’t muster more than two shots on target in the entire game. Los Diablos Rojos were lucky to sneak in a late goal from Enrique Triverio in the 85th minute.

Monterrey star Edwin Cardona nearly lost the match for his team after receiving a direct red during the second half. Moments afterwards, Alexis Canelo equalized the game at 1-1 during the 72nd minute for Puebla. If Los Rayados want to be title-contenders, they need to avoid poor results like this one at home.

The match of the weekend. Pachuca, and Hirving Lozano, made a statement to the league with the one-sided win at home on Saturday. Lozano finished the game with two goals, one assist, and plenty more credibility before his inevitable move to Europe. Leon fans will be left wondering what the result could have been if Juan Cuevas didn’t earn a direct red before allowing the last three goals by Los Tuzos.

America goalkeeper Moises Muñoz looked like the man of the match with his nine saves that kept Chiapas scoreless on Saturday night. Newcomer Silvio Romero scored the beautiful long-range goal in the 90th minute which solidified the victory for Las Aguilas.

Plenty of possession for Cruz Azul but only two shots on target. As for Necaxa, the newly-promoted team has gained a much-needed point to start the tournament. With 33 league matches left until a club is relegated next summer, it is imperative for Necaxa to continue avoiding losses.

As if scoring an own-goal wasn’t painful enough, Chivas finished Sunday’s game with a missed penalty by Carlos “Gullit” Peña during the last minute. With four players set to leave for the Olympics soon, Los Rojiblancos might continue to struggle during the next several matches.

On paper, a boring result, but one that highlighted good defending from both clubs and the importance of Santos goalkeeper Agustin Marchesin. The 28-year-old Argentine was impressive with his crucial saves and presence in net for the home side.