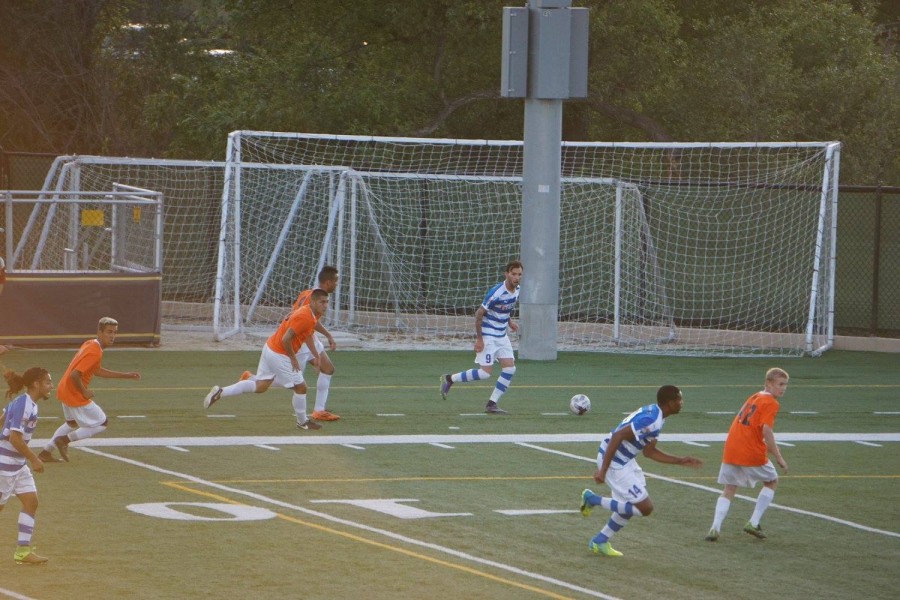 On Saturday, Albion Pros traveled north up the I-5 freeway to face FC Hasental in a highly anticipated National Premier Soccer League match. San Diego, Calif. based Albion Pros have climbed to the top of the Southwest Conference table in their inaugural season playing disciplined defense and earning hard-fought wins on the road.

Playing at home, FC Hasental came out strong in the first half with heavy pressure. For the first 15-20 minutes, Los Conejos harangued and harried every Albion Pros pass. In the early going they forced two good saves from goalkeeper Jean Antoine as a signal of intent. However, Albion Pros finally came to life 17 minutes in with a passing sequence of 18 passes that ended with an attempt on goal. Despite the good passage of play, Albion Pros had to wait until the 33rd minute to get on the scoreboard. Right fullback Jose Merlo played a long ball down the sideline that forward Tre Hayes latched onto. After a few quick dribbles he sizzled a cross between the diving goalie and lunging defender to strike partner Matt Clare, who slotted the ball into the goal with ease.

Minutes later Matt Clare found a pocket of space down the left near the edge of the box and was bundled over by the aggressive defender. However, no penalty was called. It would remain 1 – 0 for Albion until halftime.

[quote_box_center]”To their credit the guys (Pros) just battled. They showed their resilience and happy with the performance and to get the 3 points in a difficult road game”– Albion Pros Head Coach Ziggy Korytoski[/quote_box_center]

The second half brought a lot more action to the game. FC Hasental seemed re-energized after the break and looked to penetrate the stout Albion defense. Hasental earned its reward in the 54th minute after Albion Pros defenders could not clear a few of Los Conejos half-chances in the box. A few unfortunate deflections, a possible foul on defender Jeff Hughes and a well positioned Cameron Artigliere allowed FC Hasental to level the score.

Energized by the goal, the Hasental players found a second wind to press for the game winner. They almost got it in the 78th minute when a lax back pass to Antoine was intercepted by the speedy Hasental forward. Antoine rushed off his line to save the shot near the edge of the box. The assistant referee judged that Antoine made contact with the ball outside of the penalty area and his subsequent inadvertent handball prevented a clear goal scoring opportunity. Therefore, the referee had no choice but to send off Antoine in the 78th minute. Albion would have to play the last 12 minutes with ten minutes.

[quote_box_center]“This is a team of resilience…A team that is built with pride. We do it for San Diego. And we’re fortunate to get to play on Saturday and claim the win.” Man of the Match Matt Clare[/quote_box_center]

Things got extremely interesting with Albion Pros a man down, on the road with the score locked at 1-1. In the 84th minute Albion Pros broke out in a counter down the right side. The ball was cycled back to the left with a trailing Matt Clare looking to pounce on the stretched Hasental defense. He took his touch into the box but it was blocked by the lunging defender. In the subsequent ball recovery, the FC Hasental defender clearly collided with Clare inside the box. The nearby referee immediately blew the whistle for a penalty kick. Matt Clare stepped up and slotted his shot to the bottom right corner for his second goal of the game.

FC Hasental now had to chase the game with only a few minutes left. This created a large gap, which the ever-lively Felipe Liborio was able to exploit. Substitute Oscar Ortega played a hopeful ball down the left side and Liborio gave chase. With no defender nearby and the goalie rooted to his line, Liborio coolly finished his chance and the game with a shot into the right side netting in the 93rd minute.

The match ended 1-3 in favor of Albion Pros and the result maintains Albion’s lead at the top of the NPSL Southwest Conference table. Albion Pros are at home for the majority of May with games against SoCal SC on May 7th, a friendly against San Diego Zest May 14th and the rematch of the cross-town rivalry with NC Battalion looming May 21st.

You can purchase tickets for all Albion Pros games at albionscpros.com/tickets or Follow them on social media @AlbionSCPROS for the latest updates and news!