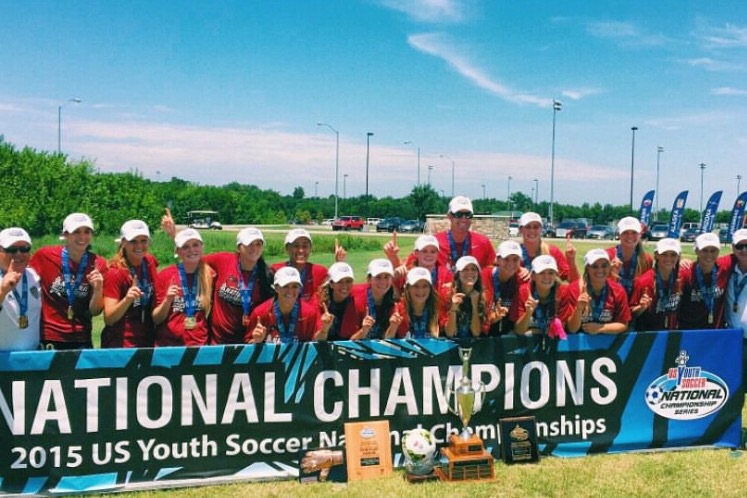 Tulsa, Oklahoma- This weekend, the top 8 teams in the nation, ages u14-18, duked it out to earn the coveted title of national champion. The top two teams of every region, region I,II,III, and IV who either won the Far West Regional League, or their regional State Championship travelled out to Tulsa, Oklahoma for an intense battle of the best of the best.

This year, San Diego’s very own Carlsbad Elite, women’s u18, have been crowned national champs after beating out teams from Kansas, Louisiana, Pennsylvania, So Cal, and Virginia. In their group they faced the DMCV Sharks (CA-S), Beadling Gunners (PA-W), and Louisiana Fire Navy (LA).

In their first match against Louisiana they managed to squeeze out a 1-0 victory. The second match against the Gunners, they outscored their opponent 4-2. Here’s where things get interesting, in their third match against SoCal’s DMCV Sharks they lost 1-0. It was a tactical match where every pass, shot, run, and tackle needed to be calculated otherwise either team was good enough to capitalize on any mistakes made. Despite the loss, it was good enough to advance into the playoffs.

In an exclusive interview, Carlsbad Elite’s center midfielder Miriam Bloom said, “the Sharks are our hardest competitor… They have always been our rival from Southern California.” Given that they have played against each other before they were very weary of each other’s style of play.

Since this game was their very last club game before they head off to college, they knew their hearts needed to be poured out in this last game. In grand fashion, the Carlsbad Elite bested the Sharks 1-0 in the final. Miriam Bloom went on to provide the game winning assist to make the game 1-0 and helped keep the shutout for the rest of the game.

Their success wasn’t luck at all. These girls prepared very meticulously. Miriam said, “To prepare for the games this week I ate the same thing everyday and we listened to the same songs during our warm ups throughout the whole tournament.” Miriam is committed to Sonoma State University and will leave for college on August 10th. Her favorite part of the tournament was “when we scored in the final because it was truly a team goal, there were 6 or 7 people involved. It was the best feeling in the entire world. It was an unforgettable moment, everyone was in tears and couldn’t stop smiling at the same time. It was the best way to finish off our club careers and move onto to college soccer.”

What a sentiment! Congratulations to the u18 women’s Catlsbad Elite for this tremendous feat! San Diego is proud to claim you girls as our very own!