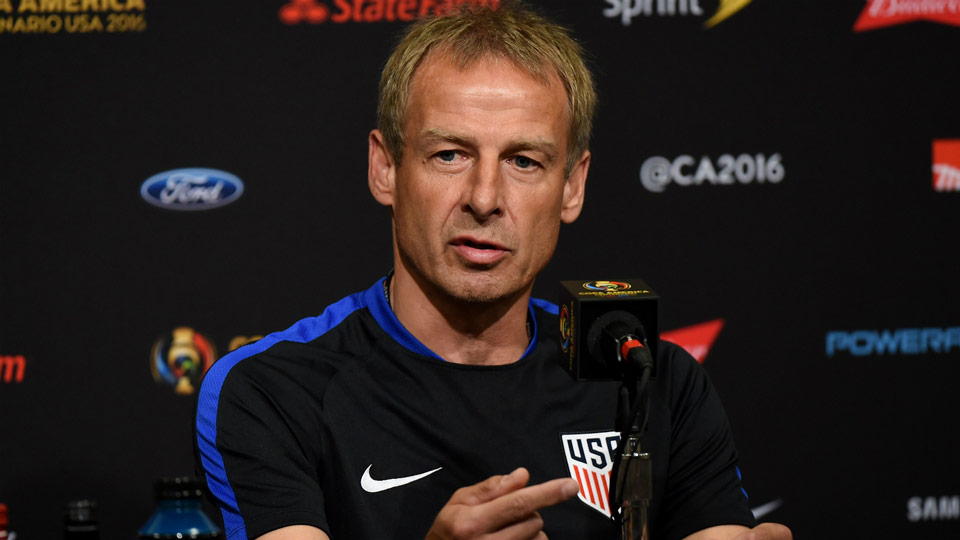 Where do we go from here, Jurgen?

Our fearless German leader is going nowhere. Not today. Not tomorrow. Not next month. Not next year. Jurgen Klinsmann is the manager of the United States Men’s National Team, and will hold his post until the conclusion of the 2018 World Cup, possibly longer, whether we like it or not. So, with all that in mind, let’s live in the moment.

The U.S. were beaten 2-0 in the opening match of the Copa America Centenario on Friday night, in front of over 68,000 fans at Levi’s Stadium in Santa Clara. The Yanks by no means played terrible, but were beaten handily in a tight and cagey game, by a team that – on paper – should beat them at least nine times out of ten. Neither goal came from the run of play, and both were products of American mishaps.

AC Milan center-back Cristian Zapata thumped home the opener for Colombia in the 8th minute off a fantastic corner kick service from Edwin Cardona. U.S. center-back Geoff Cameron was picked on the play, as he and captain Michael Bradley looked less than fabulous on each and every replay. The marking was sub-par. The communication left a lot to be desired.

After a choppy start, the U.S. actually had a decent spell of possession toward the latter end of the first half, with a chance or two sprinkled in for good measure. Clint Dempsey went just wide, and numerous players had shots from 25 yards and in blocked by Colombian defenders who were on the other end of the organization spectrum. (In other words, they were organized, and also really good.)

Then came the dagger, just five minutes before the stroke of half-time. Michael Bradley provided Colombia with an attacking opportunity that led to Deandre Yedlin being called for a hand-ball inside his own box. Colombian star James Rodriguez stepped up to take the penalty, and the Real Madrid man sent Brad Guzan the wrong way as he calmly slotted the ball into the lower right corner of the goal to give his side a 2-0 lead.

For most of the second half, the Colombians sat back and let the game come to them. Apart from a Clint Dempsey free kick that was exceptionally saved by David Ospina, and a Dempsey header from a Bradley corner that was cleared off the line, the American attack was non-existent. Both of those opportunities came from set pieces. As far as the run of play went, 17 year-old Christian Pulisic (who came on as a sub in the 66th minute) looked like the only real threat to the stingy Colombian defense.

Colombia hit the crossbar late on, and the 2-0 final scoreline seemed more than appropriate. It was not only a reflection of the day, but of the teams themselves. Here’s what Klinsmann had to say about that.

“It’s really important for our players to see that they (Colombia) are absolutely beatable, that they (U.S. players) come out of this game, saying, ‘We gave the three points to them, but it’s absolutely no problem now going forward.”

He went on to say this:

“We were absolutely even. We had a totally even game here.”

The media at Levi’s Stadium immediately had a field day with these quotes, which seemed to be indicative of a man who is either delusional or incapable of telling the truth. The “Klinsmann’s got to go” conversation started up again, among reporters and fans alike. But we go back to the opening of this piece. He’s here, and it doesn’t matter (to he or Sunil Gulati) whether or not you approve. So what can we do? Where do we go from here? To quote the great Garth Algar, we must “live in the NOW!”

The United States take on Costa Rica on Tuesday night in Chicago. The Ticos drew 0-0 with Paraguay on Saturday in sticky Orlando, meaning that the U.S. loss to Colombia doesn’t see them in a truly dire situation. They need to win, but so do the Ticos, who will face the mighty Colombians in their final group match.

The fourteen players that saw the pitch for the U.S. on Friday night did not play horribly. No one really played great either. So, why not switch a few things up? Klinsmann will likely continue to insist on playing a 4-3-3 of sorts, with three central midfielders in the fashion that we saw on Friday. Fine! Let’s not waste our time fighting that battle. Say what you will about the shortcomings, the formation can work. There just needs to be a few changes in personnel.

Here is a U.S. lineup that will provide the best chance to beat Costa Rica.

Let’s go over this thing. Guzan did nothing wrong in goal against Colombia. It would be nice to see Tim Howard before the tournament is over for the U.S., but in the meantime, Guzan stays.

One of the main issues for the Americans on Friday was the fact that Bradley had to play babysitter for much of the game, as the petulant and child-like Jermaine Jones roamed all over the pitch, constantly ditching his defensive duties, and forcing Bradley to sit much deeper than he likes. Going forward Jones offered next to nothing, and his reaction to being subbed off in the second half summed up the immaturity we all know so well (angrily gesticulating toward the coaching staff and kicking a couple of water bottles for good measure).

A colleague in Santa Clara suggested that Kyle Beckerman replace Jones in the next game. It would serve a purpose, but the idea of Geoff Cameron stepping up, slightly ahead of the backline as a firm defensive mid who is in constant communication with the two center backs seems even better. Besler comes into the defense, Cameron pushes up, and Yedlin and Johnson fly up and down the wings.

With Bradley now able to push into the attack with regularity (and not having to babysit anyone), he is joined by Darlington Nagbe to form a lethal midfield partnership that will attack with a purpose, something we did not see at all against Colombia.

What Jones did to the team on Friday resulted in a domino effect of negativity. With Bradley and Alejandro Bedoya constantly forced to drop deep, even when the team was in possession, Bobby Wood found himself having to check back to the ball in positions that were far from beneficial (and far from the goal). Wood is a center-forward. With this lineup, he will stay at center-forward and have the best chance to score the first U.S. goal at the Copa.

Clint Dempsey can continue being Clint Dempsey. “He’s getting old.” “He’s selfish.” Believe what you want. Dempsey still poses an attacking threat, and seemed to be one of the few Americans on the pitch that was doing more than running through the motions on Friday night.

The biggest change is starting the kid. There’s been this discussion surrounding Christian Pulisic of late that is almost comical. “We don’t want to put too much pressure on a 17 year-old kid.” This kid, – scratch that, this young man – plays professionally for Borussia Dortmund. He has scored goals in front of over 81,000 fans at the Westfalenstadion. The notion that playing for the United States, and being placed with such high expectations is going to be harmful to his development is laughable. This isn’t Freddy Adu! We’re talking about a professional here. Did you see what he brought to the game when he came on against Colombia? The only bummer was that he didn’t enter sooner.

It’s soccer in 2016. 17 is the new 21. And here’s some food for thought. He’s the best player on this U.S. roster! Not “the player with the most potential”. Not “the fastest” or “the best dribbler”. Pulisic, at 17, having played for the USMNT for the first time less than three months ago, is the best player we’ve got. What that says about our overall system is for another piece entirely. What it says in the moment is that he needs to start against Costa Rica.

Removed from the lineup (along with Jones) are Alejandro Bedoya (who looked lost and out of position against Colombia) and Gyasi Zardes (who was constantly bossed off the ball and whose first touches made it look like he was wearing titanium boots). Graham Zusi’s entrance into the game late on should also be his only appearance of the group stage.

So there you have it. Let’s can the “Klinsmann out” talk for at least the rest of the tournament. Let’s root root root for the Yanks, and just pray that our German leader finds the light, and perhaps a moment of clarity when making his next lineup. Hopefully that moment will come as he reads this article.