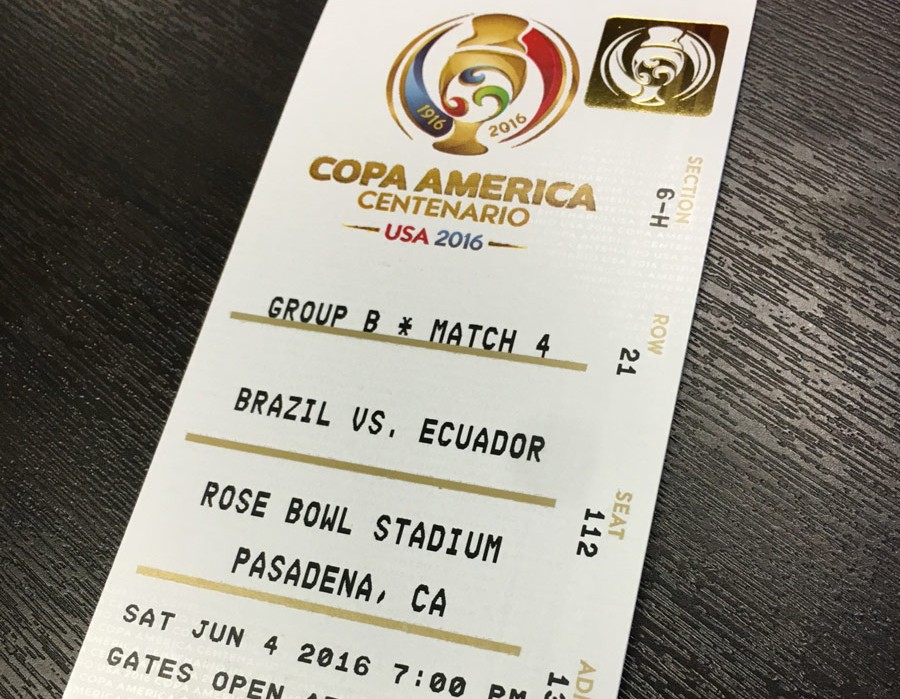 Ready for the Copa America Centenario?

With the tournament just around the corner, and a preview already up for Group A, our very own Nate Abaurrea and Cesar Hernandez dive into Group B and give us their expert opinions.

At first glance, Brazil appears as the standout team in the bracket that also includes Ecuador, Haiti, and Peru. Even without Neymar, the poster boy for the 2016 Olympics in Rio de Janeiro, the eight-time winners of the competition are not only the favorites of the group, but are odds-on for the entire tournament as well. Will the Pentacampeões live up to their high expectations and glide into the knockout stage? Will Haiti shock the world and sneak into the top two of the group? Let’s find out.

Hernandez: Alright Nate, let’s first talk Brazil. We all know what they represent in any competition, but I’m still not convinced that they will be able to stroll through the group stage. In comparison to the other three teams in the group, Brazil’s roster is stacked, but I’m wondering what impact the team can make without Neymar.

Abaurrea: Well, it’s not like they haven’t played in a Copa America without Neymar before. Remember his alter-ego, Mr. Head Butt, just last summer in Chile, after Brazil’s 1-0 loss to Colombia in the group stage? Suspended for the remainder of that tournament, he left his team high and dry, but in all honesty, they didn’t look all that different without him. After sneaking by two South American opponents in the 2014 World Cup knockout stage, karma took a Brazilian bite with their penalty shootout loss to Paraguay in the quarter-finals of the 2015 Copa, perhaps saving them the embarrassment of getting thrashed in another tournament semi-final (Paraguay was beaten 6-1 by Argentina in the semis).

“Stacked” is a relative term, I suppose. It’s more than just missing Neymar. This Brazil team seems to lack that edge, that ferocity and desire to dominate/humiliate their opposition, traits we associated with almost every Brazil squad of the 90’s and 00’s. However, they’ve been handed the mother of all cakewalks in this tournament as far as the groups are concerned. I see them winning it with nine points, and again going out on penalties in the quarter-finals.

Hernandez: It’s weird to talk about Brazil’s chances because the joga bonito days are obviously long gone, but as you mentioned, they could potentially sleepwalk through this stage and still find themselves in the knock-out round.

Seven points seems about right, for me. I’m saying they draw their first game against Ecuador in Pasadena. I’m hoping Peru gives them some trouble, but Brazil has traditionally done really well against them. In the 41 times that the two have gone up against one another, Brazil has only lost to Peru a total of three times. Against Ecuador, in a total of 29 matches, Brazil has only lost twice. I don’t know the stats of the head-to-head against Haiti, but I’m just going to go ahead and guess that Brazil has never lost to them [Brazil has defeated Haiti twice in their two meetings].

Looking up top, it will be interesting to see if Hulk steps up for Brazil. Seems like the spot is now his after Neymar’s absence.

Abaurrea: So we both agree that Brazil win the group. Who snags that second spot? You’ve been leaning toward Ecuador in conversations of late, and it will be hard not to root for Haiti and their roster that includes five players who ply their trade in the North American Soccer League. But any Peru fan reading this must surely be pointing to the most recent of history. Was it not La Blanquirroja who finished second in their group in 2015 – behind none other than Brazil – and made it all the way to the semi-finals, losing 2-1 to the host and eventual champion Chile?

Hernandez: For the sake of an interesting argument, I would love to say that Brazil won’t finish first, but I have to be honest with myself and agree that they will. On paper, there is no reason why they shouldn’t dominate the group stage. Done and done. Congratulations Brazil, you just won yourselves the stamp of approval from Nate & Cesar’s prediction committee!

You’re right about Peru, but consider this: They had to play Bolivia in the quarterfinals of that competition. I’m not sure how many fans truly see them as a daunting opponent. It’s also important to note that Peru has recently looked questionable during CONMEBOL’s 2018 World Cup qualifying and only has one win in the six matches played.

Abaurrea: Peru are a young team. Christian Cueva – a man Cesar covers extensively in Liga MX with Toluca – will be a staple in their midfield. At 24 years of age, Cueva is one of the five most capped players on the squad. However, nobody on this Peru side is more experienced than forward Paolo Guerrero.

With 26 goals in 76 caps to his name, the 32 year-old has a chance to make La Blanquirroja history here in the United States. He is currently tied for the all-time lead in national-team goals with Teofilo “El Nene” Cubillas, the 1970’s star who is regarded by most as the greatest Peruvian to ever play the game.

It’s a pretty special feat, and there could be another interesting layer added to the Guerrero story. He is the only man on the Peru roster who plays his club ball in Brazil, with Flamengo. As sweet as it would be if he broke the record against the Canarinho, Brazil is their third and final opponent in the group, on June 12th in Foxboro. The schedule also plays into Peru’s hands, with a couple of winnable games before the showdown with the group giants.

I know it was a pre-tournament friendly, but Ecuador looked like a tired pile of nothingness against the U.S. this week in Texas. Tell me why they finish ahead of Peru. And while you’re at it, tell me why I shouldn’t put a few bucks down on Haiti to win the tournament (with 500 to 1 odds, you’ve got to figure it’s a pretty good risk to reward ratio).

Hernandez: Looking at Ecuador, we also have to consider the results that the team has been able to collect in CONMEBOL’s World Cup qualifying. After six games for all involved, Los Amarillos are currently sitting in second place with four wins, one draw, and one loss. In a region as difficult as South America, that’s nothing to laugh at, especially when you consider that they beat Argentina 2-0, in Buenos Aires, last October.

Also, check out some of these names in the midfield and forward positions: Antonio Valencia (Manchester United), Jefferson Montero (Swansea), Michael Arroyo (Club America), Enner Valencia (West Ham United), and Fidel Martinez (Pumas). Against the United States, only two of those players mentioned were given the start. On paper, I can’t see anybody other than Brazil surpassing Ecuador in Group B.

As for Haiti, save your money. Les Bicolores have looked awful in CONCACAF’s World Cup qualifying and have yet to collect a victory in the four matches of the fourth round of the competition. If they can’t beat Jamaica or Panama, I’m not sure how well they will do against Ecuador, Peru or Brazil. Goalkeeper Johnny Placide will need to be near-perfect in net if Haiti wishes to sneak into the top two.

Abaurrea: So there you have it folks. Brazil will win the group and Cesar Hernandez hates Peruvian soccer. I can’t wait to cheer on La Blanquirroja against his darling Ecuador on June 8th, and put a few bucks down on Haiti just for the hell of it.

Hernandez: To all of the Peru fans out there, let it be known that I prefer Peruvian beans over pinto beans. Best refried beans in the world.