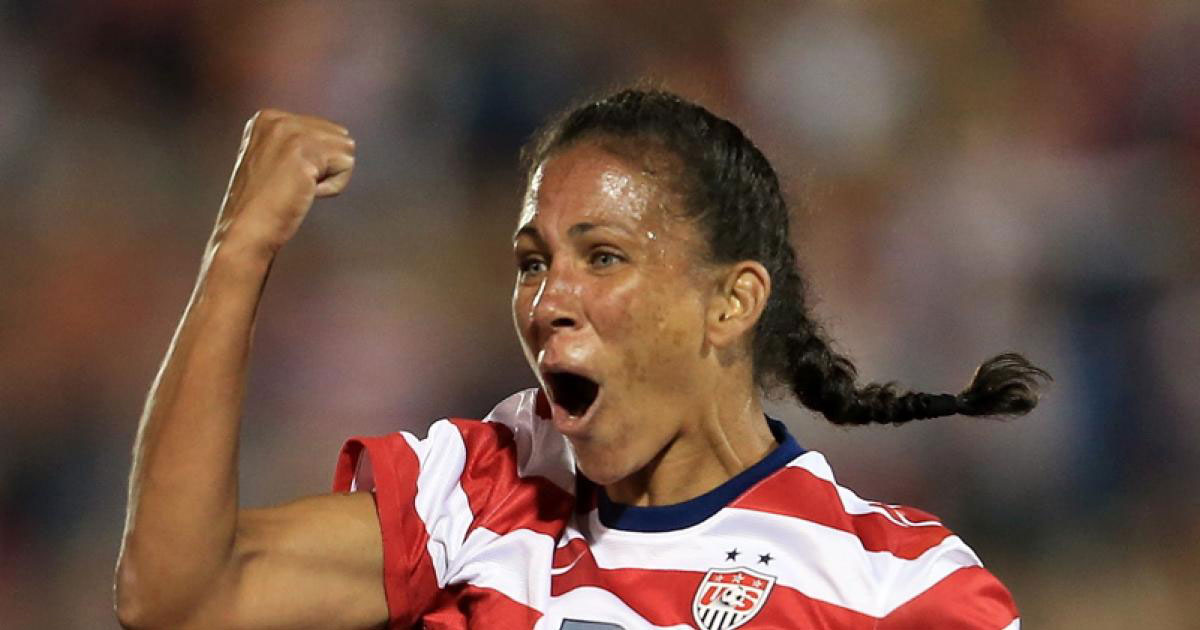 USWNT Players pay Homage to the Legend that is Shannon Boxx

Veteran midfielder Shannon Boxx will play her last game for the United States Women’s National Team today in a friendly against Brazil that is part of the USWNT World Cup Victory Tour.

Born and raised in Southern California, Boxx was a multi-sport athlete, excelling in soccer, volleyball, basketball, and softball. Boxx attended the University of Notre Dame, where she helped the Fighting Irish win it’s first NCAA National Title. Boxx made her international debut for the United States in 2003 in the games leading to the 2003 FIFA Women’s World Cup and went on to make 194 appearances for the United States, scoring 27 goals.

Over the years Shannon Boxx has developed into a real leader in the National Team camp and has mentored many of the current generation of players. Her teammates had the following to say in the build up to Boxx’s retirement:

“Shannon was always my favorite player in many ways because she has every quality that I don’t really have and I loved her because of that. It’s just so cool to see somebody be such a dominant player. I don’t think she really got the credit she deserved for the amount of legwork and the amount of influence she had on the game for this team. She just bossed it every time she was on the field. That position is so hard to play and I feel like she just owned it in there. She’s the reason for a lot of this team’s success and it was just an honor to play with her. I will always remember that when I was young and I was on the bench, she was my favorite person to cheer.”

“When I first met Shannon, she was intense. I was scared of her. She wanted to win every game on the field in practice, even if it was some warm-up game. She was really intimidating. Then you grow to just have so much love and respect because you want to play on her team, because her team is going to win. She just became this leader, somebody who led by example. She always was kind of a holding midfielder that I loved because she always was the first to pressure the ball outside the 18. She went in hard for tackles and she was always slide-tackling. For me, she’s one of the toughest players that have ever played on the U.S. team.”

“I’ve played with Boxxy for a long time the National Team and clubs and I think one of the amazing things about Boxxy is that she approaches every game the same. She is 100% a competitor. She’s a great teammate and leader.”

“Boxxy doesn’t like to talk about it but she was my youth coach at one point. She coached Christen (Press) and I for a small stretch. She hadn’t played for the National Team yet when she coached us, so to have been able to watch her career as it took off was awesome. We kind of got to enjoy that excitement of her first call and she’s had a storied, tremendous career. I can’t say enough. Everyone knows what she’s done and she’s been a huge part of this team for so long. She was really a backbone and she will be missed.”

“Boxxy is a legend. Obviously when I first came on the team, I played forward, but then moving back into the midfield and getting to learn from her, to be coached by her, to share the experience day-in and day-out with her, and go through battles together and have a connection on the field has been so special. I think Boxxy is one of the greatest to ever play the game and she’ll be missed.”

“She’s helped me learn a lot. I haven’t played with her as much on the field in that sense, but I think what she’s taught me about what she’s learned over the time has been awesome and I’m very appreciative that she was so open to me. She has the best long services ever with both her left and right foot, so I watch her because that was the position I played growing up. She was the one action that I always watched. I had poster of her on my wall. I told her that once and I don’t think she liked it! But I had to tell her that I loved the way she played.”

“Shannon Box is one of those second pioneers. I was able to watch her career grow because back in 2003, I was in middle school. I was watching every National Team game and eating it right up. Then, being able to actually play with her, and learn from her, and see the way that she thinks about being a professional, and being on the National Team, and what it means to represent yourself and your country, has been a really great learning experience for me personally because she’s always carried herself in a way that is so respectful to other countries, but so poised and confident. That has been really great to watch because you can always take something away from watching somebody that carries themselves like that.”

“She was one of the best teammates from when I first came onto the team. She was so inspiring and so nice, and so welcoming and easy to talk to. I will miss her leadership. I will miss how she could just go onto the field and just make anyone else look good by a certain play or a ball that she can play you and she works her butt off for everyone. And I will never forget in the 2011 World Cup when she would just tackle everyone. No one would be able to get by in our back line and I think that’s what made us look so good is because she was just right in front of us taking control and crushing everything that would come toward us. She was one of the best holding midfielders that I’ve ever played with. She will be so missed along with her beautiful child, Zoe, running around. She’s had an amazing career, and for her to come back after giving birth, she’s just super woman.”

“Boxxy and I have had definitely an interesting relationship on the field. I think at first when I got into the mix, maybe we didn’t see some things the same way on the field and we butted heads a little bit. But as we grew older and we started playing with each other more, and we’ve talked about this a lot, we’ve emerged and evolved as this team, this team in the middle of the field who is controlling everything, who’s doing the dirty work, who’s got each other’s back. She’s been an unbelievable player to play with and against, although I prefer to play with her! I don’t think you’ll ever see another Shannon Boxx. She’s just the ultimate defensive midfielder who will do anything, throw her body in the way, play great balls and win air balls. It’s just been a pleasure to play with her all these years and a pleasure to see her come back after pregnancy and continue to do well and be a part of this World Cup victory.”

“Shannon Boxx is probably the best defensive midfielder that I have ever known. She has had a fantastic career. Just the fact that she came back from having a baby girl and the fact that she has battled Lupus for so long makes her an inspiration. It’s really great to see her have such a long, great career, and we were able to celebrate it with a World Cup title, as well.”

“She is just a grinder. She’s the most consistent player and you know what you’re going to get from her. She’s a leader without being overly outspoken and she’s also a good teammate. I played with her on Gold Pride during my first season as a pro, and I was kind of intimidated because she’s this incredible player and has such status with the National Team. I was like, ‘I hope I don’t screw anything up.’ But she was always so welcoming and supportive and I feel like I’m so lucky to have been able to watch her be a professional in the way that she is on the field and how she conducts herself. She’s just a good person and I’m so happy and she’s achieved so many things. She’s got little Zoe and she’s going to be the best mom and I know she will do amazing things beyond her career. She’s had a long career and it makes me sad to see her go, but I know that she’s ready, she’s happy and she’s content. That’s what makes me happy for her.”

“I have this picture of me at like 10-years-old and trying to get her autograph at a game. She was my coach and individual trainer when I was growing up when I was 12 and she would come out and we would do individual sessions. This was when she was just getting her calls up to the National Team so I followed her journey closely for so long. The first time I ever played with her was at magicJack. She of course didn’t remember me at all but of course I knew everything about her. From there, to be a part of the National Team with her, to be able to play with her at Chicago and to see her in all different types of role, bossing the midfield, to stepping away from the game and going through that journey to get back which is something that I can’t even imagine, it’s been special to be her teammate.”

“Shannon Boxx is my favorite player to play with. Obviously, I’ve grown up playing with her with that connection of her being right in front of me and she is just a rock solid player, I think, maybe even underrated. She was really the heart of the team and just loved the way she gets in there and slide-tackles. She’s probably one of the best players in reading the game. I’m really going to miss her on and off the field. We’re buddies off the field when we hang out and do our mom thing. Her career has been amazing to see and she’s going to be a friend for life.”

Boxxy is one of the best at her position that I’ve ever seen, and I think that we’ve seen how important she’s been. It’s a hard position to play. You can’t just throw anyone in there, and she played it so perfectly and so effortlessly. I don’t think we realize how much ground she covered, tactically how smart she was and her positioning and everything. She was just fantastic.”

“For so many years, Boxxy brought such hard work game and a tough mentality that we really enjoyed having on our team. You know, she was kind of that brick wall, that defensive player that kind of put everyone on her shoulders and really motivated us all. So, I think to not have her on our team anymore is going to be really sad, but she’s had an excellent career and we couldn’t have asked for more from her.”

“My best memory of Boxxy is I had to mark her on a defensive corner kick when we were playing professionally and she kicked my butt every single time. She won every single ball. For me, she was always that player that put her body on the line and was so dependable and reliable. You just never questioned her role on the field. It was just, she’s going to be there where you need her.”

Shannon Boxx’s final game for the United States will be played Wednesday Oct 21st at CenturyLink Field in Seattle, Washington. You can watch the game on ESPN2. Kickoff is at 7 p.m. PT