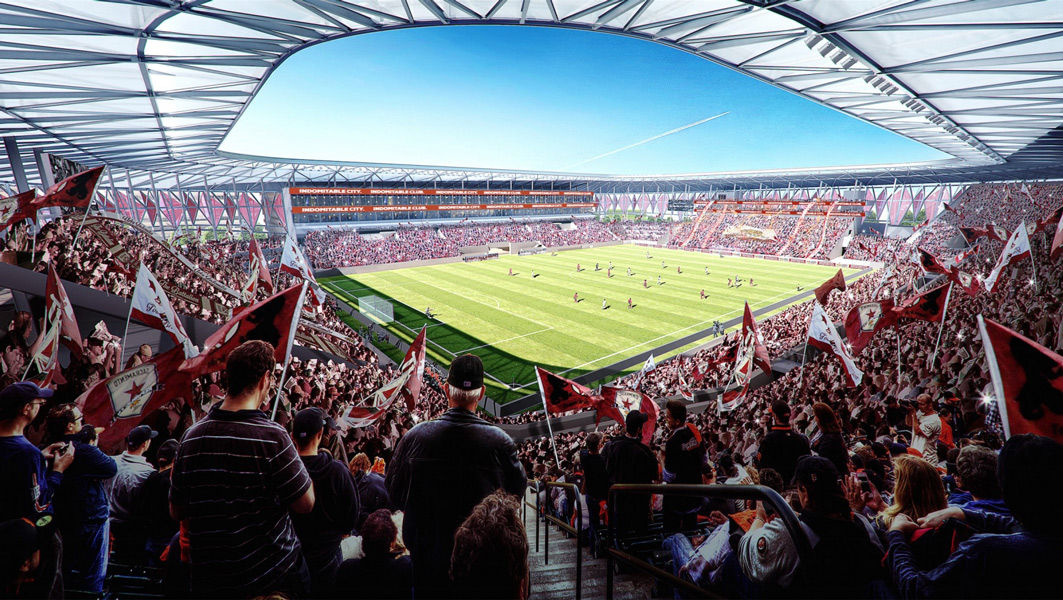 In June, we introduced our MLS Expansion Quest Power Rankings, regarding the 12 cities in the United States vying to become one of the apparent final four expansion teams in the top flight. Some activities have taken place in the meantime, so let’s catch up and see where the candidate cities rank at the moment (Important disclaimer: Where possible, actual public information is used to inform these rankings, but on some level, they do remain a hunch on the part of the author).

Sacramento’s case has gotten stronger in the last six weeks, and they were already the safest bet of the lot. In addition to San Diego’s bid switching approaches (more on that below), last week the Sacramento Republic FC group took the audacious step of beginning pre-construction work on their proposed MLS stadium with a public event. Most think that’s tacit acknowledgment the group is getting a jump on construction in order to be ready right away when they are permitted entry in MLS, and while there’s been no confirmation publicly from the league on that, the already strong case for Sacramento, which includes a fully approved stadium plan with control over the land, a successful extant USL team, and enough financial backing to weather the step up to MLS means Sacramento are as good as in and the other 11 cities are essentially competing for the final three spots.

Cincinnati remains near the top of the pack, at least according to external metrics, like fan interest in USL side FC Cincinnati and location. Questions persist about the corporate base of the area and they appear to be a bit behind the ball regarding their stadium deal, although they have the potential advantage of playing Ohio and Kentucky against each other to leverage a favorable deal.

But the biggest factor that’s likely helped Cincy’s cause in the last six weeks in the public domain is their June 28 U.S. Open Cup Round of 16 match against the Chicago Fire. In that game, a packed house at Nippert Stadium provided one of the best atmospheres in recent memory for an Open Cup game, and FC Cincinnati played the Cinderella role with a flourish as they won 3-1 in the penalty shootout to advance to the quarterfinals. That the game was surprisingly broadcast on ESPN helped showcase Cincinnati to a national audience, and if the local interest in the team persists, MLS could get very used to another city that shows well on national television broadcasts.

San Diego remains in the Top 4, surely a controversial stance given the group behind SD’s bid has ceded the first two expansion slots in the hope their stadium plan will be approved in time to be one of the last two selections. After all, they literally launched a campaign days ago called #WaitForSD.

But truthfully, after Sacramento and possibly Cincinnati, the other candidates are already battling for the remaining slots. If that’s the case, what difference does it make if San Diego does have to slide down the pecking order a bit, so long as they remain in the Top 4 overall?

Of course, the San Diego bid group is trying to get ahead of a bad break with their special election proposal for a stadium project being rejected by City Council in order to stay in consideration for one of the final slots. MLS could opt to look elsewhere, ultimately, and they could lose out. But MLS is clearly interested in an NFL-less San Diego, and they may be willing to wait. Until a few more cities rush up the standings, San Diego hangs on by a few fingers in the Top 4.

San Antonio is in the same boat as San Diego, down to San Antonio’s elected officials speaking openly last month about their city likely being a better candidate for the third or fourth slots. At the risk of drawing the ire of San Antonio fans, their footing is rather precarious here — the elected officials could be trying to save face as other cities come into consideration, or they could be realists about the prospects, rightly thinking they are in good shape for a Top 4 selection. San Antonio does have a stadium, and the backing of the San Antonio Spurs ownership group, but the factors that will decide their prospects here are their market potential, corporate base, and geographical interests for MLS. They probably still have an edge here, but truth be told they remain one of several cities vying for the last two slots.

Nashville holds steady at No. 5 after a positive visit from MLS leadership last month and the city hosting the U.S. Men’s National Team as part of a Gold Cup doubleheader. Nashville’s market viability remains a question without a pro team already playing there (a USL team will begin play next year) but local politicians support a public-private partnership at the Fairgrounds, which MLS Commissioner Don Garber visited. And geographically, the success of the south in MLS expansion, with both Orlando City and Atlanta United hitting the ground running, indicates Nashville, one of the most vibrant cities in the U.S., would be a great spot in the country to expand MLS’ footprint. If the USL team pulls in good numbers and the stadium plan continues to proceed, Nashville could very well elbow out San Diego or San Antonio for one of the final two slots.

Call it recency bias, but North Carolina FC owner Steve Malik’s stadium plan reveal and welcoming to town of MLS Deputy Commissioner Mark Abbott helps move the more likely of the two North Carolina bids up our power rankings. The stadium plan would be located in a downtown Raleigh spot, with Malik talking up the urban walkability for a young adult audience, which is of course the target market for MLS.

In spite of the positives, Malik will need public help to get the land for the stadium, and the flipside of the “walkability” aspect is that parking appears to be nonexistent around the stadium, with the rest of the neighborhood completely built up already. And while North Carolina could also benefit from expanding MLS’ southern footprint, their NASL team pulls in good, not great, attendance numbers in Cary. This bid clearly appears to be better than Charlotte’s, but MLS may ultimately decide this is not quite enough to end up in the league.

Also certainly in the mix, the group behind the bid, which owns USL team Phoenix Rising FC, appear to have finally figured out how to pull in fans to their stadium over an entire season and have been making a promotional push touting their prospects of being a good MLS market.

What is most interesting, perhaps, of a recent SoccerNation exclusive is the argument by Phoenix’s bid group that they don’t have to build a domed stadium despite sitting in a desert, that the dry air means an open-air stadium being properly built will be safe enough to sit and play in, sounds a little bit like Qatar’s original claim they could build air conditioned open-air stadia for the 2022 World Cup, which has since been pared back with the actual tournament moved to the winter. Perhaps the technology is in fact available and skepticism from people like me is unfounded. Beyond that, Phoenix seems like a good bet, but probably have to see if their market potential, corporate base and location shake out more favorably for the expansion slots. Momentum is on the rise for them, so they could very well end up in the Top 4.

Bill Edwards’ bid for Florida’s Gulf Coast moves up a spot from last time around, and if Miami’s separate expansion plan falls apart, which is at risk of happening as early as this week, they could leap up the power rankings. Many readers argued Tampa is a Top 4 shoo-in after the first round, but I still believe Miami holds the key, fairly or not, for the Rowdies’ case. If Miami proceeds, will MLS support three Florida teams? We could find out a lot, indirectly, about Tampa’s prospects in short order. Regardless, they still appear to be firmly in the chasing pack for a slot.

Speculation mounts that Detroit won’t get the political support needed to secure their proposed stadium site, but a new report this week claims the tide may be turning on that front. Detroit slipped a bit in the power rankings, even if they still remain in better shape than the cities below them, because the concerns about the spending power in the area, among consumers and corporations alike, persist.

There’s been nothing publicly helping St. Louis’ prospects, which remain effectively dead, aside from whispers that there are efforts behind the scenes to revive this bid. MLS clearly wants to set up a team in St. Louis and could even be helping those quiet efforts, which would elbow one of the other cities right on out of the running if it comes to anything. Even so, the public-facing indications are that St. Louis still has no chance at MLS expansion right now.

Charlotte continues to have the wackiest bid process. MLS came to visit in the last six weeks, but that was first, overshadowed by Raleigh/Durham’s much more coherent plan, and second, prefaced with accusations from local government officials of shadowy “private meetings” which would run aground of laws on such occasions, which were flatly denied by MLS.

Truthfully, it’s unclear if Charlotte’s bid itself, backed by former NASCAR executive Marcus Smith, is the bigger problem or if local government is adding more than its share of bad press to the situation. Probably the truth lies somewhere in the middle, but given the competition in play for four expansion slots, a city presenting a bid this disorganized and behind in progress would have to be extremely coveted by MLS in order to expect anything good to come of it.

No progress has been made in the past six weeks on Indy, which was already the least likely to come to fruition, so this remains effectively dead at the moment.