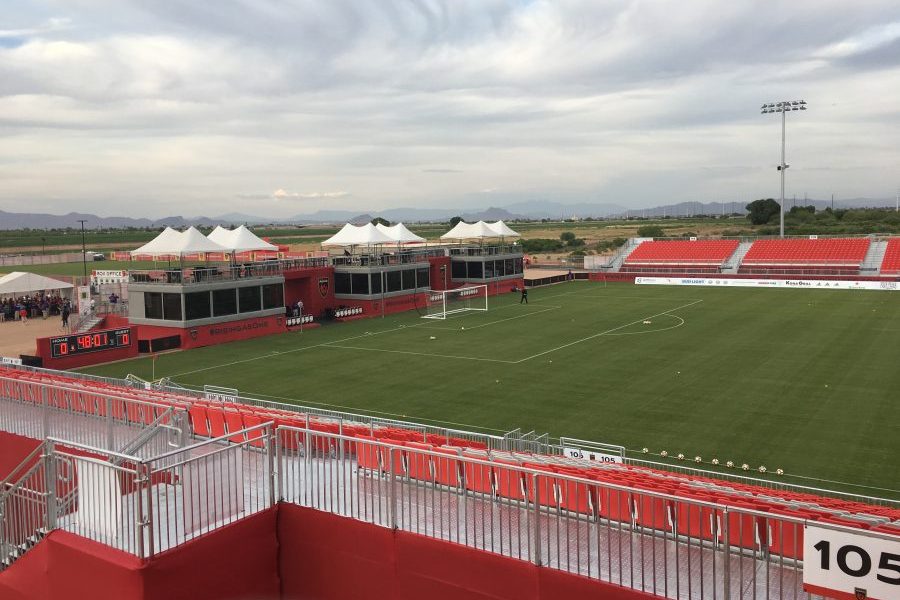 Phoenix Rising FC have, without question, a shovel-ready, privately-financed stadium plan that has the attention of Major League Soccer, and club ownership recently sat down with SoccerNation to make clear that they are ready to go.

Much has been made of the contentious race to secure one of the next four expansion slots into Major League Soccer. Since the league’s January 31st ap

Much has been made of the contentious race to secure one of the next four expansion slots into Major League Soccer. Since the league’s January 31st application deadline, the fate of each of the 12 applicant cities have risen and fallen primarily on the bidding owners’ ability to deliver the number-one item on the MLS wish list: a soccer-specific stadium.

There was a time, not that long ago, when MLS would allow a desirable ownership group access to the league’s membership with little more than a flicker of hope that an appropriate stadium would appear. When David Beckham was granted the option to purchase a franchise for a mere $25 million back in 2007, MLS was in a very different place, but still, they could not have foreseen, much less desired the embarrassing situation playing out in Miami.

Likewise in 2013, the league was understandably keen to add City Football Group to its business, but four years later, New York City FC is perhaps farther from a stadium deal than Beckham is. Today’s expansion applications come from cities much less densely developed than Miami or New York City, but real struggles are reducing the number of viable candidates with startling speed.

As is the case with launching any high-profile business on a large piece of prime real estate, the primary hurdles to these efforts are political, financial, or both. A public vote on financing a budgetary shortfall in Saint Louis stalled the MLS bid in that city. In San Diego, the public property targeted for stadium development cannot change hands without a vote, which is now slated to happen in November of 2018, well after MLS has concluded the expansion process.

In nearly every other candidate city, similar situations are putting ambitious MLS bids in a holding pattern of maddening uncertainty, and the media circus that has erupted around them is a boon to both the league, and the bidders who are poised to rise above the rest.

Phoenix Rising FC, once considered a dark horse in this race, is one of the only candidates facing none of the obstacles to stadium development that hampers other markets, and its ownership group has quickly and methodically achieved every objective necessary for the MLS stamp of approval.

Phoenix Rising Soccer Complex, home of the current United Soccer League club, and proposed home of the future MLS franchise, sits at the corner of approximately 550 acres of land at the southwest extent of the Salt River Pima-Maricopa Indian Community (SRPMIC) – also known as the center of the Phoenix area’s soccer demographic.

Situated at the intersection of major Valley arterials Loop 101 and Loop 202, the complex is an easy drive from both high-dollar suburbs and high-density millennial hotspots like Tempe and Old Town Scottsdale. The main campus of Arizona State University, one of the largest schools in the nation, is two miles away.

The location is not in downtown Phoenix proper, as might have been mandatory in MLS bids of the past, but ask any Phoenician, and for the moment at least, they’d much prefer south Scottsdale for a night out. Remote though the site currently is in terms of nightlife, a great many Valley residents already depend on access to a vehicle, and a spur from the popular Metro Light Rail has been discussed. The club already operates a shuttle to the match from the official pre-match party at nearby Tempe Marketplace.

Most importantly for this race – and with two announcements promised by MLS before New Year’s Day, this is definitely a race – the stadium complex has plenty of space for a 25,000-seat stadium with amenities, and the red tape has already been cut.

Back in November, 2016, when the ownership group announced that Arizona United SC would become Phoenix Rising FC, they had already established the land lease at SRPMIC that would make possible the existing USL complex, as well as a future MLS stadium, retail ventures, and whatever else would become mutually beneficial.

The land at the site is generationally owned, and the families involved are in agreement to develop the footprint.

In a statement at the re-brand event, David Fordon, CEO and General Manager of the Solanna Group, the owners of the parcel said, “We’re quite impressed by Phoenix Rising FC’s grasp of the goal we are trying to achieve at Akimel 7 for a quality sports and entertainment environment. We also appreciate the Club’s commitment to bring a state-of-the-art, FIFA stadium designed for Arizona’s climate to Salt River as a significant contribution to the economic growth of the Community.”

The current pop-up stadium used for USL matches occupies 15.8 acres, and approximately 17 more are available for parking. A total of 77 are currently under lease, but details on the final design of an MLS stadium complex will dictate how much more land, if any, will be needed from the Solanna Group.

In short, the politics and real estate of the Phoenix Rising FC MLS bid are done deals.

More than a tourism slogan, noting the dry heat of the Sonoran Desert is essential in understanding that the weather in the Phoenix area actually lends itself well to fan comfort and player safety.

While exploring options for climate control in a new venue, Phoenix Rising has found that when compared to extremely humid cities like Houston and Orlando, Phoenix fares favorably. That’s because in the desert, player and fan perspiration evaporates and cools to a degree that is quite comfortable in the shade.

MLS determines the heat safety of a match using the “wet-bulb” measurement. Essentially, when humidity is below 100%, the wet-bulb temperature will be lower than what is measured by a typical, or “dry-bulb” thermometer. Phoenix will instantly become the driest climate in the league, and that being the case, a surprisingly enjoyable place to attend a match.

The last piece in Phoenix Rising’s stadium plan, therefore, has been to engage an architect that can optimize on this phenomenon, and create a world-class environment that will keep fans comfortable and players safe through the most difficult months of the summer, July and August, when Phoenix humidity reaches its peak.

Recently, club ownership was in Kansas City, where they met with seven different architects, all of which put forth conceptual plans for a new MLS stadium that will be both iconic in its design, and innovative in its approach to economically cooling the dry desert air.

MLS executives were on hand for the meetings with the architecture firms, which is significant. The prevailing opinion in the league office had previously been that adequate cooling could not be achieved without a domed stadium, the price tag of which would be too steep for most MLS owners. Now that all parties have had a chance to see the latest in cooling technology and its effect on the Sonoran air, Phoenix Rising ownership is confident that a more affordable stadium design will be accepted by the league.

HOK Sport provided a rendering for the purpose of the complete bid submitted to MLS on January 31, but the club plans to name its preferred architect and plan by August 3.

Short of a billionaire with the ability to simply write checks for each step of the process, the Phoenix ownership group has all of the pieces to complete the deal.

In May, the club secured financing with Goldman Sachs, which recently structured both Banc of California Stadium in Los Angeles and Audi Field in Washington, DC. They also retained Charles Baker and Irwin P. Raij from the law firm of O’Melveny & Myers LLP, who have extensive experience in pro sports transactions at the highest levels.

Not all of the candidate cities have identified a stadium site, much less finalized the political and financial particulars necessary for finishing the deal, but Phoenix Rising has unequivocally checked every box within its control. They have even produced a rabid fan base the size of which is envied by the vast majority of USL clubs.

Add to those accomplishments the things outside the club’s control – media market size, the soaring population of millennials and Hispanics – and the overall bid is difficult to ignore. Of course, no one can predict the decisions of Major League Soccer, but based on what we know, Phoenix Rising is very, very close to putting the ball in the back of the net.