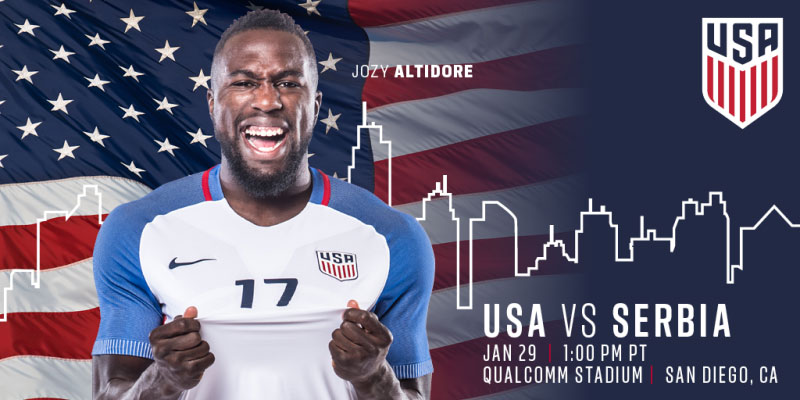 Newly reinstated head coach Bruce Arena and the United States Men’s National Team will cap off the traditional January Camp with a friendly against Serbia on January 29th at Qualcomm Stadium. Kick off is set for 1:00 pm and while a roster has yet to be announced, soccer fans in America’s Finest City can expect to see a team predominantly made up of domestic talents.

The match in San Diego comes in a time when the city is braced to possibly bid farewell to the NFL’s Chargers and potentially welcome a new Major League Soccer franchise in the wake of Qualcomm’s current tenant’s departure. San Diego regularly ranks highly among TV ratings for soccer events and the return of the USMNT, who last played in San Diego in June of 2013 in the run up to that summer’s Gold Cup, provides an excellent opportunity for the city’s population to come out and support the sport.

The January Camp falls outside FIFA’s recognized international windows and as such, Bruce Arena will likely select the bulk of his squad from domestically based MLS players. Young players like Jordan Morris, Brandon Vincent, and Justen Glad will be looking forward to the opportunity to showcase their abilities alongside senior national teamers like Clint Dempsey who Arena has expressed a desire to invite to the camp as well.

Tickets for the match will be available on ussoccer.com starting Monday, December 19.