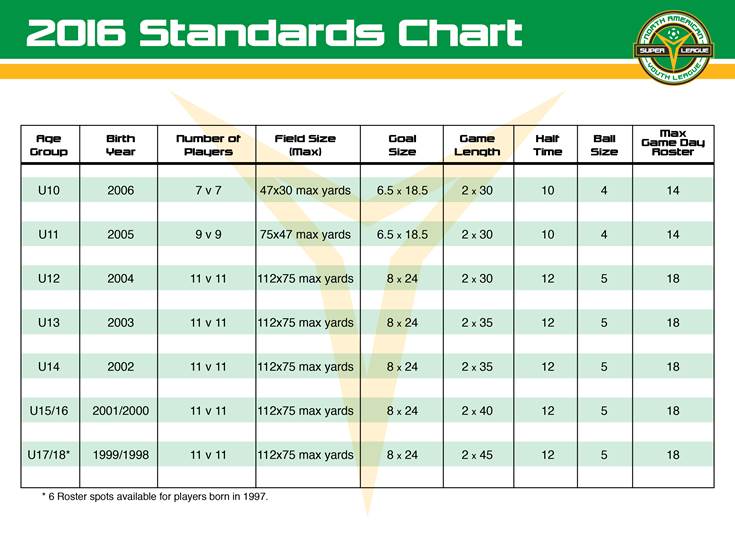 In an effort to enhance the development of the top tier of the Super Y League’s players, the league is initiating an allowance of six U19 roster spots for the U17/18 age group heading into the 2016 season.

After careful deliberation during the offseason, the SYL determined this change was twofold:

“The league recognizes that this is a key time period for the players, as well as for the clubs housing them,” SYL Director of Business Development Joel Nash said. “Current SYL members explained some concerns in the past regarding the age group cutoff, and we feel this will provide a positive alteration while maintaining the majority of the roster within the proper U17/18 age group.”

Realizing that under the former Aug. 1-July 31 registration period, players born between Aug. 1, 1997 and Dec. 31, 1997 would have been eligible to play in the Super Y, the league made necessary changes to accommodate these players during this period of adjustment.

“We believe our goals mirror the youth initiatives and development taking place under the U.S. Soccer Federation’s development model,” Nash said. “Our main objective is doing what is best to enhance youth development, so we’re excited about these changes to our oldest age group. It will create a stronger development window and also improve the caliber of play in the SYL’s U17/18s.”

The following page includes the 2016 SYL season standards regarding player eligibility, field standards, in-game roster restrictions and more for U10 through U17/18:
For more info on the USL Super Y League, visit them on facebook