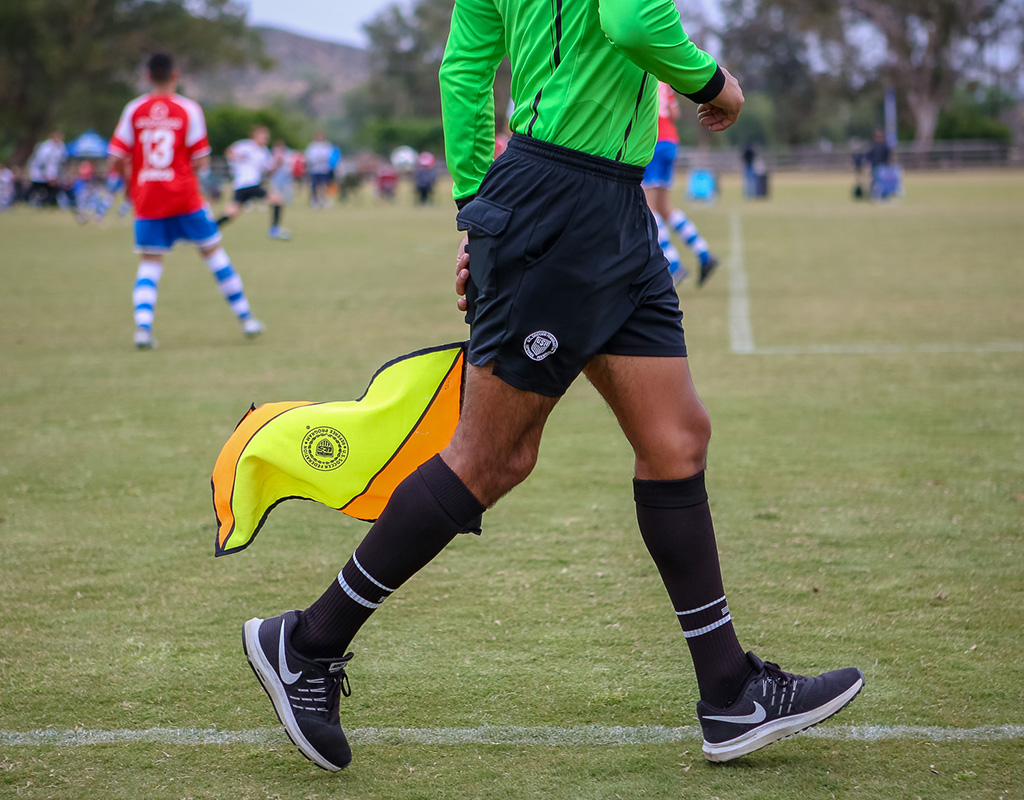 Summer is coming. A summer job, for a teenager, used to be a rite of passage. However, those jobs are harder and harder to find these days. Fast food and retail have high age minimums. Gone are the days of teenagers mowing lawns around the neighborhood for pocket money. But one of the greatest summer jobs for young people is wide open, well paying, and relatively unknown: REFEREEING. There is NO MINIMUM AGE for entry-level referees, and many refs start as young as 12-14 years old.

Work when you want, and get paid well!

Once you become a referee, how much can you expect to be paid? Good question! A new young ref will probably start out with lower-level games. Pay for those games, as as assistant ref (AR), is usually about $20 per game. The games last under an hour, and you’ll usually be assigned around three games in a row. I challenge you to name another teenage job where you can make $60 for less than three hours of work. And that’s just entry-level pay! Once you get more experience, you’ll be assigned as a center ref, you’ll get more competitive games, and your pay will go even higher. During the summer months, there are tournaments every weekend, and you can choose when you’d like to work.

How to become a ref:

Every entry-level job has training time and stuff to buy. Refereeing is no different. CalSouth lays out the entire process on their website HERE. You’ll have to pay to register with USSF (United States Soccer Federation), and you’ll need to buy some ref gear. (SoccerLoco has a great clearance deal on AR flags as of this article’s publishing.) You’ll have to watch online classes to learn the ropes, and then you’ll have to attend a 4-hour outdoor education session. Once you’ve done that, you’re ready to go!

James D. Abi-Abdallah has been a referee for about 10 years now. I asked him what young refs need to know. He said, “The most important thing that new referees need to know is that refereeing any sport is not an easy task and no one is expected to immediately be perfect at anything. Don’t be afraid to make mistakes because you can learn from those experiences and become a better referee.”

OK, great, but what about “Those parents?”

I decided to get real with James. I’ve attended quite a few soccer conventions and educational sessions, and referees quitting because of sideline behavior is a constant topic. I asked James how he deals with unruly coaches and parents. He answered, “It is very important to understand that soccer is a very emotional game and parents and coaches are enthusiastic about their child competing. They always want their team to come out on top. To deal with disruptive parents and coaches who have crossed that line, you have to remain calm and tell them in a respectful manner that their behavior is irresponsible and it needs to stop now. If the problem continues, you may remove them from the match.”

“REMEMBER: Who is doing the yelling?? The coach is the one with the problem, NOT YOU!“

Lee Popejoy, a founder of youth soccer in Southern California

Refereeing can be a great experience for young people, even kids who aren’t competitive soccer players. James adds, “There aren’t many jobs that pay as well as reffing does at such a young age, and you get to choose your own schedule and when you actually want to work. Getting paid to exercise is another big bonus. And the ref community is great. We always have each other’s backs. It’s a great job. The countless friendships I’ve made in the ref community are friendships that will last for life.”