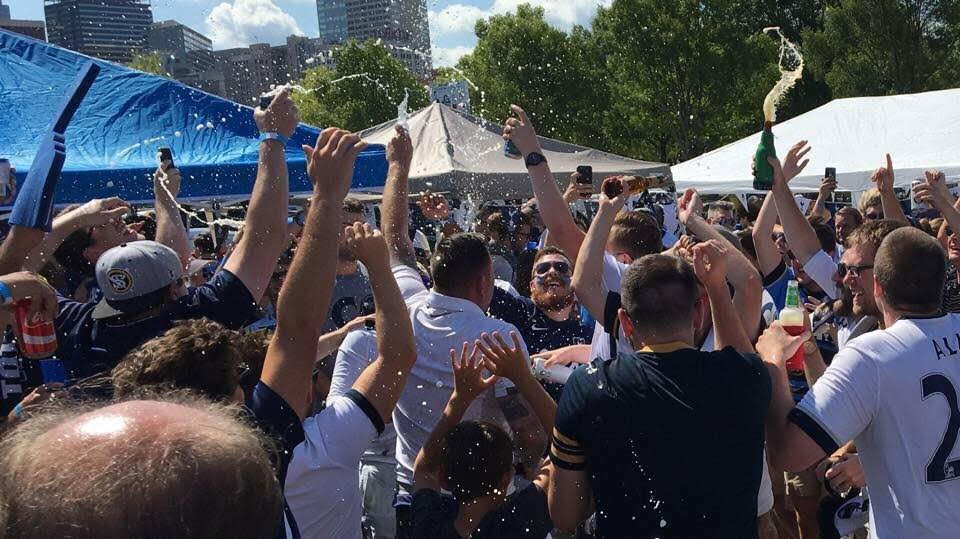 After a fine opening to this special online series, a piece that featured the San Diego Gooners and the good folk at Bluefoot Bar and Lounge, it’s the bitter rivals of the Arsenal that arrive on our next page.

Founded in 2014, San Diego Spurs are a boisterous, humorous, and unequivocally loyal group of supporters obsessed with Tottenham Hotspur. The North London side has a reputation for putting their fans through the wringer year after year, though this current crop of Tottenham talent still has the Spurs faithful dreaming, as realistically as they ever have in the modern era, of the day when the club will break their league title drought that dates all the way back to 1961.

I drove out to Ocean Beach on Sunday morning to join up with San Diego Spurs at their home pub, The Harp, for an intriguing London Derby clash with reigning Premier League Champions Chelsea. It was the first match of the “Wembley era”, the start of a short spell at England’s national football stadium for Tottenham as the new White Hart Lane is under construction. The last time they played at Wembley? A 4-2 loss in the FA Cup Semi-final to none other than Antonio Conte’s Blues. Revenge was in store. Sadly, it would not be attained.

Instead, it was heartbreak for Mauricio Pochettino’s side, and the few dozen Spurs fans at The Harp, as a Marcos Alonso brace stunned the “home” side and gave Chelsea a 2-1 victory. Spurs had fought back valiantly to break down a mighty wall of Blue and tie the match late, before Alonso won it at the death with a low, left-footed strike to the near post that left Hugo Lloris with a wee bit of egg on his face.

Disappointed but proud as ever, a few of the lads from San Diego Spurs spoke to yours truly about the group, their beloved club, The Harp, and what it truly means to support Tottenham.

San Diego Spurs at The Harp in Ocean Beach.

“There’s an elevated sense of suffering and pleasure when you have other people to suffer and celebrate with,” said San Diego Spurs Co-Founder Andy Smith. “It’s the case in so many aspects of life, and it’s most definitely the case here with this group. I’ve been a Spurs fan since the late 90’s, and in the pub today were people who’ve been fans for twice as long, as well as people who are brand new to this thing. We all suffered together, and in a strange way, we enjoyed every second.”

“When it comes to the Premier League,” Smith continued, “people here in the States have the luxury of basically picking their club. I think it’s easy to be a Manchester United fan, a Chelsea fan, a Man City fan… It’s easy to be a supporter of the big money clubs, teams that can buy the biggest players and play this modern football game off the pitch. I think it takes a unique person to be a Spurs fan, a patient person with a good attitude.”

Smith echoed a sentiment of gratefulness heard from quite a few Tottenham fans in recent years.

“People need to realize that this whole ‘fighting for a title’ thing, even this ‘fighting for a top 4 place’ thing, this is all relatively new to us. We were hardly ever ‘in the race’ until these last few years. I feel like anyone who supports Tottenham should be filled with gratitude right now for this period of time that we get to be a part of.”

“Who knows what it will lead to, maybe a title, maybe nothing. I just know that I’m proud to support a club that does things differently, and when I hear fans of the big money clubs argue with one another over who’s bigger or better, I just want to ask them, ‘who the f*** cares?’ Enjoy your friends. Enjoy the football! Tottenham is a club with fans who truly love the game, rather than just playing the game of ‘I love this team’ and pushing it in everyone’s faces. Plain and simple, if you like soccer, come down to The Harp and enjoy a match with us! We’d love to have you.”

The Harp, funny enough, is owned and operated by two Chelsea supporters. On this eventful Sunday morning in OB, I had to ask one of them, (Tony Fleming) what it’s like hearing cries of “f*** off you Blues” and “WE HATE CHELSEA” from patrons in his own bar.

“The Harp is one of those places,” said Smith just before he had to depart and assume daddy duties, “where you know that they truly care about the game. They’ve had this place opened up for a half-dozen of us at 4:30 in the morning, drinking coffee and water because we can’t have alcohol ’til 6. That’s not a money-making endeavor. They’re not profiting off of us. They care about us. They care about the community. They love the game.”

San Diego Spurs also have their roots at another popular soccer watching destination in America’s Finest City. Like many other supporters groups in the area, Shakespeare’s Pub was the original home of San Diego Spurs. Space can be a tad tight within those walls, and with the rise in Premier League fandom came the necessity for the Spurs supporters to find a spot of their own.

After hearing a similar story from the SD Gooners, it seems as if Shakespeare’s Pub serves as an incubator of sorts for the organized groups of football obsessed San Diegans. 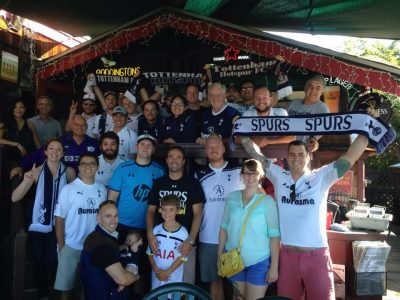 Circa 2014, San Diego Spurs at Shakespeare’s Pub on their first matchday as an officially recognized Tottenham Supporters Group.

“The importance of Shakespeare’s in terms of the growth of soccer fandom in San Diego cannot be overstated,” said SD Spurs Co-Founder Ben Forman. “It’s where people have been watching games for decades. For a long time, all the way back in the dark ages, it was one of the only places where you could watch soccer, period. It’s where our group started. It’s where a lot of these groups started. It’s a massive part of the pulse of soccer in this city.”

Forman and his wife Allyson (and likely their soon to be born daughter) are as dedicated to supporting Tottenham as any people you will find on this side of the Atlantic. This summer, Ben took a trip to Nashville to join up with Spurs fans from all over America and all over the world for a friendly against Manchester City. The Citizens dismantled Spurs to the tune of 3-0 in front of over 52,000 fans. The score did nothing to dampen the enthusiasm of Forman and the rest of the Tottenham crowd.

“That was a really special trip,” Forman said of the adventure to Music City. “To know that this thing, which is thousands of miles away, has the capability to bring together all these different people, all under one crest, it makes me proud to be a Tottenham supporter. That was an amazing experience.” 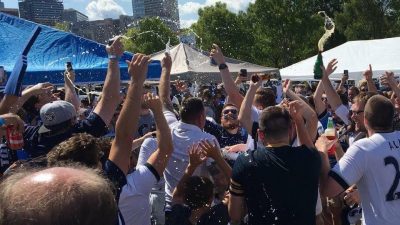 “I sat next to a guy at a bar in Nashville,” Forman recalled. “He was ‘Duluth Spurs’, and when I say he was ‘Duluth Spurs’, I mean it literally. His name is Scott Hughes, from Duluth, Minnesota. He is a one-man Tottenham band, and this summer friendly was his big chance to be together with thousands of people who love the same club. We here in San Diego are an official group recognized by the club itself. He’s just one guy obsessed with Spurs. It’s just so beautiful to me, the dedication and love involved with all of that. I want to go to Duluth and watch a match with that dude.”

After the sting of the defeat to Chelsea was washed away on Sunday morning, I spoke with Fritz Pizano, a San Diego Spurs member who takes that “dedication to Tottenham” concept to another level. You could call Fritz the creator of “Spurs Sin Fronteras”.

“I live in Tijuana,” said Pizano. “I commute up to San Diego and come to The Harp for almost every game.”

When Pizano says “almost every game”, he really means it.

“When Spurs play at 4:30 in the morning, I leave Tijuana around 2:30 AM to make sure I get here nice and early so I don’t miss any of the action.” 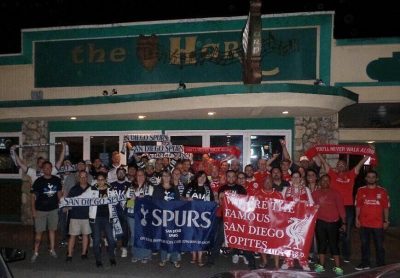 Who needs light? San Diego Spurs joining together with LFC SD for a 4:30 AM Tottenham v. Liverpool kickoff in August of 2016.

How did a young man from Baja California come to support Tottenham, you might ask.

“It was actually a failed signing that brought me to the club,” said Pizano with a bright smile. “I love Giovanni Dos Santos as a player and as a Mexican international. But what I’ll always love the most about Gio is that he’s the reason I started supporting Tottenham. He was signed by the club in 2008, but it never worked out for him at White Hart Lane. He was loaned out a bunch and hardly ever got to play. But as soon as he signed, I started doing some research and discovered what Tottenham were all about as a club. I fell in love with Spurs and would watch every game down in TJ. When I found out about San Diego Spurs, I was ecstatic. Flash forward all these years later, and these people are some of my best friends, and being here with them for these matches at The Harp, singing, screaming, celebrating, suffering, all of it… it’s just the best.”

“It’s high time to be a Spurs supporter,” declared Forman before we left the pub. “Generations have gone by without ever seeing the quality of football we’re seeing at the club right now. We want it to lead to wins and trophies, but for me and so many more people, it’s about enjoying this journey. Supporting Tottenham is like riding a roller coaster, and for some reason, we just can’t stop coming back for more.”

If you are interested in joining up with San Diego Spurs, check out their Facebook page, https://www.facebook.com/SanDiegoSpurs/, follow them on Twitter @SDSpurs, or swing by The Harp at 4935 Newport Avenue in Ocean Beach and enjoy a match with San Diego’s official Tottenham Hotspur Supporters’ Group.