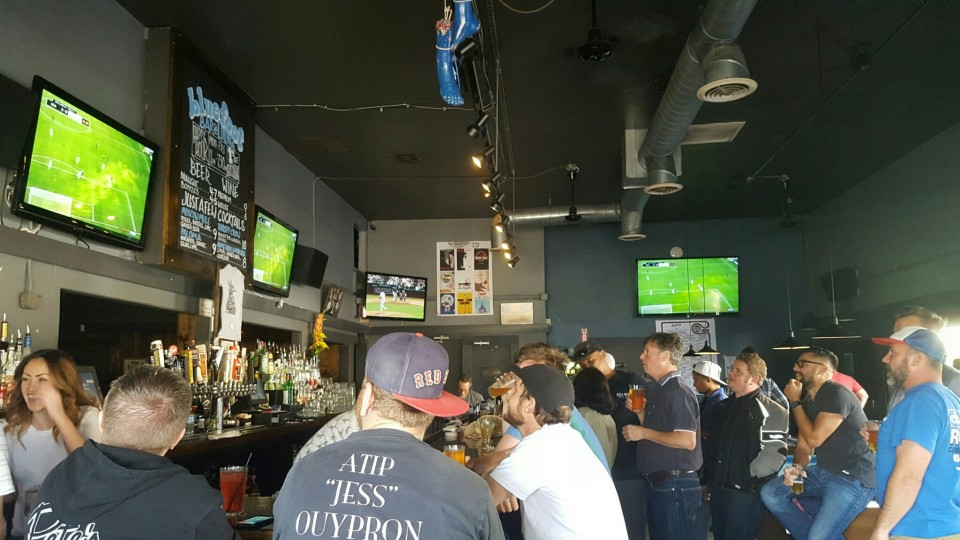 Where am I going to watch soccer?

That was one of the first questions that came to mind when I moved to San Diego in January.

Watching sport in the bar is a totally different experience from watching by yourself at home. It’s definitely an enjoyable social experience for all and additionally, many just Head Out to the Bar to watch free TV, which is always a plus!

With over 1.3 million residents and 372 square miles of coverage in San Diego, I soon realized that it wasn’t going to take weeks, it would take months. It was going to take a countless number of matches, an ungodly amount of pints, many games of pool and darts! All I’m saying is that I’m just glad I read this article on darts for beginners before I started my research! And the most important, a significant amount of research to visit every “soccer bar” in town. My friends and I have been practicing a lot, and I think we’re prepared for the games. Some have even used onehattrick.com to find home dartboards so that they can get the perfect scores when we’re playing.

In hopes of finding my favorite place to watch a game, I decided to make this a multi-part journey for you all to enjoy. I’m genuinely thrilled to see where this takes me. Whether it’s a bar, restaurant, or pub, as long as they are showing the game and offering pints, I’ll add it to my list. Even if it’s during a Bratislava stag party!!

One of the first places that was recommended to me was the Bluefoot Bar & Lounge in North Park.

I decided to try my luck on an early Sunday morning in late April and was pleasantly surprised to see that it was open. While the rest of North Park was likely still nursing a hangover, a small group of early risers sat at the bar as Leicester City vs Swansea filled most of the overhead screens in the bar.

I was immediately greeted by “Dirk,” the lone bartender who was proudly sporting an Arsenal Hector Bellerin jersey. While happily serving draft beer at around 7:30 in the morning, Dirk went on to explain to me the ins and outs of soccer at Bluefoot. It soon became clear to me, that at least according to Dirk, this was the Arsenal bar San Diego. Although the place only had about six to seven people present that Sunday to watch Leicester, Dirk went on to explain that a good number of Gunners fans usually made early morning trips to Bluefoot to watch their beloved Arsenal.

He also went on to explain that Bluefoot was also the hub for local Aston Villa fans. The recent relegation to the Championship might prove to be tricky for supporters wanting to catch games live in the future, but Dirk assured me that one fan will be bringing his laptop and Chromecast to the bar — just in case.

During halftime, Dirk blasted Prince over the speakers and eagerly began to chat about the game with other patrons, almost as if he was blissfully unaware that it was around 8 in the morning on a Sunday.

While many of the restaurants and bars near Bluefoot have a pricey and posh feel, Bluefoot was more inviting and sincere with its tired bar stools and honest beer prices. Oh, and if you’re wondering about the Copa America, the place was packed when I revisited on June 7th for the USMNT game against Costa Rica.

I was half-expecting a small group of supporters but was excited to see two rooms filled with soccer-devotees. I counted around 50 in attendance for the match and was told that there was even more during the last game against Paraguay on the 11th.

Seems like you can’t go wrong with Bluefoot. The beer is decently priced (my last pint of Karl Strauss’ Aurora Hoppyalis was $5), the staff has been great, and the place was filled during the last two USMNT matches. Also, any spot that has a bartender playing Prince during halftime of an English Premier League game, probably knows what they’re doing.

When I asked on Twitter about a place to watch soccer, the overwhelming majority of people immediately pointed out Shakespeare Pub.

With plenty of old school British advertisements and artwork on the walls, the pub walks a fine line between authentic and tongue-in-cheek. It’s fun no matter how you look at it and provided a perfect backdrop when I visited last week to catch some Copa America action.

After I walked past a red telephone booth near the entrance, I was pleased to see about 10 or 11 people closely following Friday’s match between Chile and Bolivia. I ordered an imperial pint of London Pride, took my seat at the bar, and couldn’t have been happier with my decision. The bar wasn’t small, but somehow still provided a communal feel as we watched the game.

Due to theme and name, it doesn’t take long to realize that the real fun at this place is usually around EPL or England matches. After chatting with staff for a bit, they stated that they were expecting a good-sized crowd for the upcoming Euro game between England and Wales on June 16th. There are still so many other bars for me to explore, but it might not be farfetched to say that Shakespeare Pub might be the best place in town to catch that event this week.

After a couple of imperial pints and a bit more conversation with the other fans near the tv, I eventually made my way home, impatient to return for the upcoming England match for the Euros.

It’s no wonder why people love the pub. The food is a bit expensive, but well worth every dollar. Also, you can’t go wrong with an imperial pint filled with your favorite beer. As for the soccer, if I enjoyed watching a Copa America match, I can’t imagine how much fun it’s going to be watch an England game at Shakespeare Pub & Grille.

One quick thing about the food. I have to mention the fact that a friend of mine, who grew up in the Manchester area, recently visited the place and told me that the meal he had was “proper English.”

With a replica of a Champions League trophy sitting proudly near a signed Liverpool jersey, it was clear which EPL team this bar supported. If you needed any more proof, there’s a poster on the bar’s website that reads “Showing All The Liverpool Matches Live!”

Unfortunately for me, I didn’t get a chance to visit during a game for The Reds, but instead dropped by for the first Champions League semi-final match between Real Madrid and Manchester City.

The pub was much bigger than I anticipated, but was still filled with about 30-40 people catching the game on one of the numerous televisions in the bar. For whatever reason, I’ve been told that Princess is also a great location to catch Chicago Bears games. I’m not sure how the Bears and Liverpool overlap, but it was fascinating to see a television in the back with plenty of Bears gear and flags decorating the perimeter of the screen.

The establishment, especially in the back room, has a warm living room-like feel. Was it the lighting? The amble space with wooden tables and chairs? For whatever reason, I had no trouble at all feeling immediately comfortable.

I wish I could talk about the game, but the true highlight was my meal. My grilled cheese, bacon & tomato sandwich was one of the best things I’ve so far had to eat in San Diego. I was hungry for some futbol but was instead satiated with bacon and cheese.

Princess is definitely one of those places that I’ll need to visit again, especially during a Liverpool match or a knockout Euro game. When filled, the atmosphere in that large place must be thrilling to be a part of.

Cheers to you Princess Pub & Grille, even when Manchester City and Real Madrid failed to entertain me, you did plenty to compensate. This place felt like the kind of pub that I wish was closer to my house, but that might be because parking is a bit tough around the Little Italy area.